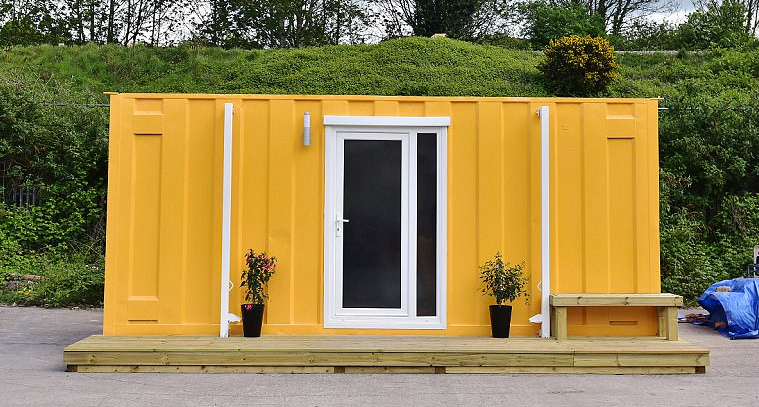 Could you imagine living inside a shipping container? Before Cargo came along, you are probably only ever pictured them on the back of trains, lorries and ships – carrying goods across both land and sea – which, of course, is what they have primarily been used for.

Today they are used for a multitude of reasons – from pop-up shops to swimming pools and even medical centres. In 2012, Sir Ralph Fiennes’ ‘The Coldest Journey’ expedition was the first ever attempt to cross the Antarctic continent during the polar winter. During those 2,000 miles, the temperature was as low as -90 degrees and so the team had to be self-sufficient. In order to do this they took three shipping containers built on sledges – two 30ft containers provided the living space and of course protection from the elements, while the third worked as a science lab, used to gather information to understand the effect of climate change upon the poles.

If they can provide safety from the elements in the Antarctic, then they are sure to protect you from the comparatively mild winter conditions that we see in the UK, and they are often used as low-cost way to build durable and unique homes.

Last year there were an estimated 4,134 people sleeping on the streets. 23% of the total number were based in London, with the borough of Westminster recording the highest numbers in both the capital and the country. Outside of London, alongside the likes of Manchester and Brighton, Bristol recorded a high number of rough sleepers. So, could these shipping containers provide a comfortable safe place for homeless people to find shelter?

Stepping inside the first complete container, you quickly forget that you aren’t inside your average brick built flat. Looking around, you see an en-suite shower, toilet, bed and small kitchen area as well as electricity and images of the city providing the finishing touches.

Jasper, who has done a lot of charitable work over the years, recalls how this project started back in January: “It was never my intention for this to happen – I saw people homeless on the street and it was bitterly cold so I started going out and giving them sandwiches and socks.”

He continues: “It was my idea to initially get a PortaCabin, just for people to come and sit around, have a cup of tea and get out of the cold. Then someone offered me a 38ft caravan and we utilised a 48ft container. We had about six people living in that, just while the weather was bad. But I looked at it and thought, we could turn this into flats and the idea just came from there.”

The wheels were set in motion by setting up the Facebook page Help Bristol’s Homeless through which Jasper started to recruit volunteers: “Most people are looking for a space, somewhere to stay, a front door key for their own safety and peace of mind, to get themselves back together – so that is what we are aiming to do with these containers,” he explains.

To turn them into something liveable, Jasper called on the people he had met through the Facebook page and friends from across the city including skilled personnel; “electricians, plumbers and carpenters – lots of people came forward to volunteer their services and donate items that might be of use to the project,” says Jasper. “If you have got the right skill set and the right people onboard, you can do a container within two and a half weeks.”

Even the containers are being donated: “A company in Maidstone had just finished up a job in London a few weeks ago and they asked if we would like three containers, so we are just waiting for those to be shipped to us.”

The project is well underway, with one container already complete. Paul, who is currently calling it home, had been living on the streets for 16 and a half years before he met Jasper at the beginning January. He recalls Jasper promising to find him somewhere to live within 10 days, but explains: “I’d had promises like this before and so took it with a pinch of salt.” But, Jasper kept to his word and Paul found himself with a roof over his head the same month.

He describes life before as “day-to-day, just getting through 24 hours, hoping that the next day would be better.” But, following the move to the container he says: “Life is much better, it has given me a sense of fulfilment.”

The containers themselves are described as “very plush bedsits” by Jasper, who is working in collaboration with Mitsubishi: “They are going to do all our heating and one of their plans is to install solar panels,” he says.

The 20ft containers are suitable for one person but two can easily live in a 30ft one, Jasper says: “Sometimes you get a couple and they can live quite comfortably in there.” However, Jasper (pictured below, left) goes on: “Everyone is going to be vetted by St Mungos – so it is going to be a case of looking at who is eligible to go in the containers.” There is already some support for homeless people across the city, as Jasper explains: “The infrastructure is already in place, it’s not something we have to develop, we just have to direct people to the right place. But you have to want to help yourself before we can help you; if you can’t abide by what we do then there won’t be a place for you here.

“We are going to be running workshops – all the guys on site are going to get involved. We will have a rota – it might be your week to do the laundry or help in the kitchen… You have got to be involved. None of the containers have full kitchens, so we have a canteen – you can’t stay in your room, you have to come down to us for breakfast and dinner. Get involved, get working, do something. It’s not a case of locking you room up and going begging for the rest of the day – that is never going to work.”

But as long as residents are actively looking for employment, they can stay for as long as they need. “You could even be working full time and you are just staying with us until you raise enough to move into your own place. It is going to be a secure unit and a secure community.”

Paul agrees that he now feels part of a community – the project is helping him to re-learn skills from communication to cooking, as well as a variety of others while he helps turn the containers into homes for others living on Bristol’s streets.

The containers are currently on a construction site and the group are in negotiations with Bristol City Council for a permanent site. “I want to do 10 in South Bristol and 10 in North Bristol,” explains Jasper. But he also wants others to get involved to help with the homeless situation outside of the city: “I have got a gentleman driving down from Newcastle to spend four days with me because after he saw what we have done on the BBC he wants to approach his council to do the same thing up in Newcastle.

“I have had an offer of 240 acres of land up in Cambridgeshire – Berkshire homeless charity want me to help them – and they want to do the same in Charlton… I’ve also got someone in Manchester. What I want to do is to encourage people to do it – I don’t want all this on my shoulders, people are ringing and messaging me every single day for advice on where to start, how to start and where to obtain the containers and how to fit them out. I’m happy, I’m passionate about this project but its not my baby – I need everyone to be doing it because we have got a major problem with homelessness.”

Phone calls have come from as far as Kenya, Nigeria and even Australia. “I’m one person starting the ball rolling, hopefully councils will look at the project and see it is feasible. As long as you have the support of the council and do things right, it could work, it could be a solution for the whole of the UK.”

Help Bristol’s Homeless have made it their mission to change the face of homelessness because as they quite rightly state: “Everybody should have the opportunity to live in a place they can call their own.”