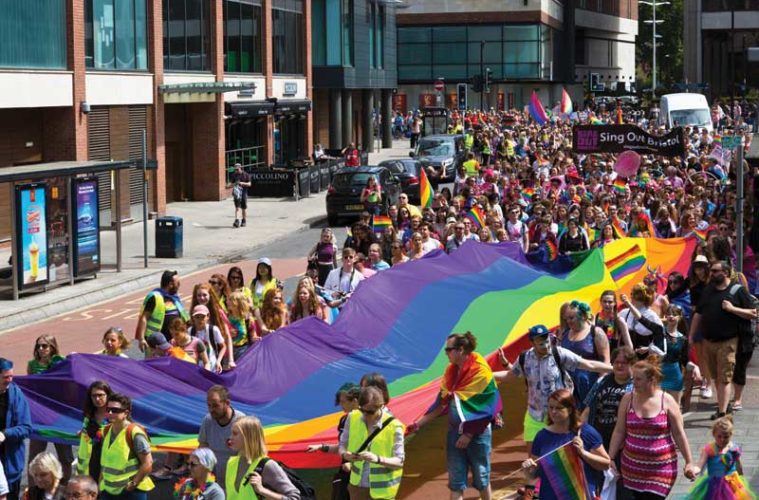 10 things not to miss at Bristol Pride

Malcolm Croft reveals 10 things not to miss this year at the biggest and brightest party to be proud of, to date

It’s been 10 years since Bristol Pride first burst, with unbridled joy, out (and proud) onto the city’s streets. To celebrate this incredible decade of supporting the LGBTQ community, the 2019 milestone event look set to be the best bash yet…

Due to the incredible success of Pride Day in 2018, where more than 36,000 people shouted their support nice and loudly for Bristol’s LGBTQ community, organisers have moved the Pride Day festival and concert on Saturday 13 July to a new home – the Downs. With more than 60,000 people expected, the 10th birthday bash has the award for biggest night of the year in its crosshairs. “Moving to the Downs not only means that we can deliver a bigger festival for everyone wanting to attend but allows us to develop new festival areas and present our biggest and most diverse line-up to date,” says Bristol Pride CEO, Daryn Carter.

Bristol Pride doesn’t start and stop at the parade on 13 July. For two weeks before the march and the gig at the Downs, there is a wealth of fun festivities taking place all over the city. First up is a screening of Trudie Styler’s directorial debut Freak Show (29 June – 5 July), Pride Circus Night (1 July) and Pride’s appearance at Bristol Carnival, the city’s annual celebration of African Caribbean culture, which commences in St Pauls on 6 July. Yes, Bristol is the place to be this July.

Following the sold-out Spice Girls show at Ashton Gate on 10 June, ‘Sporty Spice’ Melanie C returns to Bristol to headline, with Sink the Pink, Pride Day’s festival show. Mel C has remained an icon and ally of gay and lesbian communities since the Spice Girls split in 2000, when the singer revealed to the NME; “Sometimes I wish I was a lesbian because men are so crap.”

Before the fun of the festival descends on the Downs, the Pride Day Parade will march down the city centre’s streets. In 2018, more than 12,000 people – many adorned in their finest rainbow colours and with floats, banners and flags – took part in the parade and 2019 looks set to bigger and bolder than ever before. “The Parade March is an integral part of what Pride is about with all attendees coming together to declare that hatred and prejudice has no place in the city, or anywhere,” say the organisers. The parade commences at Castle Park at 10.45am and will continue through the city centre, concluding at Millennium Square. The route is two miles long and takes approximately an hour to complete. The parade is free for all. For those with Pride supporter wristbands (see the Bristol Pride website
for details), transport to the Downs festival is included in the price.

Pride 2019 events all over the world are celebrating the 50th anniversary of the Stonewall Riots by remembering the hardships fought and won that led to the birth of the Pride movement. It was the events of 28 June 1969, at the Stonewall Inn, Greenwich Village, Manhattan, that led to the first LGBTQ protest rally taking place, following an aggressive raid by New York police on patrons and owners at the city’s most popular gay bar – a refuge for people whose very being was still considered illegal. For six days, the local community demonstrated against the raid and arrests. The fight may have continued for decades to come, but this was the start of Pride.

Following the conclusion of the Pride Day Parade, head on over to the Downs to continue the party. Gates open at noon. What happens next is up to you, but there is a plethora of performers and on-site activities, including bars, food stands and markets, to whet your appetites and any other parts you may wish to refresh. With more than 100 artists spread across three stages (including the award-winning Cabaret Stage featuring some of the world’s biggest drag artists) and a community area with more than 60 charities and LGBT community support services, the festival has everything you want from a summer shindig.

Alright. Once the lights go out its time to leave the Downs and continue the Pride revelry at the official after-party at Elements at the O2 Academy, Frogmore Street. This event puts the fun in fundraising and kicks-off at 10pm. Lasers, smoke, and glitter will fill the air as well as the sound of national DJ-ing icons, including Sink the Pink, London’s famous Guilty Pleasures and Bristol’s legendary Don’t Tell Your Mother, as well other top-class stage performers, dancers and all manner of feasts for the eyes and ears. Not only does the after-party keep Pride Day alive until the next day, it also keeps Bristol Pride going too, with ticket sales helping keep the festival free for all. Be there and be square, it doesn’t matter. Just be there.

Be proud of Bristol Pride

Bristol Pride is more than just one of the UK-wide celebrations. It is the largest free Pride in the UK and an award-winning event in of itself, voted the second best Pride in the country. In 2015, it was also named in the Destination Bristol visitor survey as one of the top three reasons why people visit the city in the summer and was even voted as only one of four UK cities to make the Global Top 50 World Pride events. The success of Bristol Pride is down to CEO Daryn Carter, who has overseen the growth of the festival during the last 10 years, and his extraordinary team of passionate LGBTQ protectors and protestors. “I’m really excited for Pride 2019, we’re celebrating our success but also securing our future,” says Daryn. “It’s been an incredible 10 years and we’ve rapidly grown to a Pride that consistently named as one of the biggest and best in the country.”

Bristol Pride’s Dog Show is one of the most popular features of Pride Day. Sponsored by the University of Bristol, the dog show invites canines with can-do attitudes to win as many rounds as possible, from Waggiest Tail to Best Trick, Fanciest Coat to Prettiest Eyes and, of course, Musical Sit! Entry is £2 for as many rounds as you wish and commences at 11am at Castle Park. Good luck, pups!

Music to move you

Alongside Mel C, there is a wealth of other top-drawer music merrymakers to keep you flossing, twerking and roboting into the night. Dance-pop queen Sophie Ellis Bextor takes to the main stage with a bevy of heavyweight hits, preceded by disco legends Boney M, Sonique, Saara Aalto, Dr Meaker, Four of Diamonds, Hazell Dean and Ru Paul’s Drag Race’s Peppermint are all scheduled to perform on the main stage from noon. See you there.

• For scheduled stage times for all artists, and any other information, check the Bristol Pride website; bristolpride.co.uk