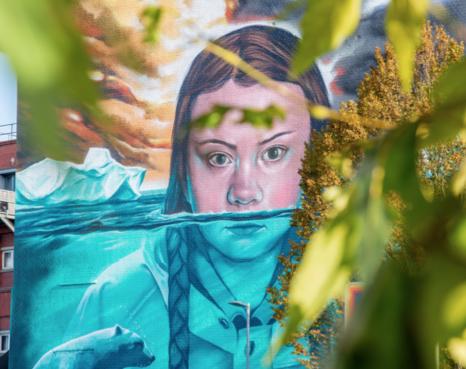 It’s been a bit of a tumultuous 12 months on the face of things… but a great many positives have also come out of the last year in Bristol. We gathered up a few of the stories that have had us nattering around the water cooler

When you pull together all the constructive change, worthwhile projects and exciting events that have come about in the city this year, it’s an impressive, heartwarming reminder of the amount of good that’s being done by the well-intentioned in our part of the world.

Yet again Bristol’s been decorated with honours – the smattering including accolades such as World’s Best Food Destination by the international Food Trekking Awards – and neighbourhoods (Easton, we’re looking at you) have been singled out as among the coolest on the planet by the likes of TimeOut. We’ve but scratched the surface with our short round-up here, but if you’ve a few minutes to set aside to remember some of the highlights, it’s full of the best sentiments to carry with us into the new decade…

At the start of February, the Duke and Duchess of Sussex refused to let wintry conditions hamper their visit to Bristol. They stopped in at women’s charity One25 as well as Empire Fighting Chance, in recognition of the remarkable work the boxing charity has done with Bristol’s young people.

The visit was a resounding hit with the kids. “Harry and Meghan got exactly what we’re trying to do here. And they gave those kids a day that they won’t forget,” said CEO Martin Bisp at the time. “The visit has even made some of the parents look at their children in a completely different way after seeing them talk with the Duke and Duchess and learning about what they do at the club.” Thrust into the national news, Empire Fighting Chance was inundated with requests from coaches across the country, enquiring as to whether its unique programmes could be implemented in other cities to help young people around the UK.

The couple also visited Bristol Old Vic to officially open the newly redeveloped front of house space, and sat in on a workshop with students from Ashton Park School and BOV’s Made in Bristol training programme.

Artistic director Tom Morris said: “This theatre’s aim is to be a place of welcome, entertainment and discovery for everyone from every part of Bristol and beyond. It is therefore particularly special to welcome the Duke and Duchess of Sussex to Bristol Old Vic as they are such great advocates for theatre; not only its ability to tell huge stories with unforgettable impact but as a means to transform lives and bring different communities together.”

There have been scores of big Bristol successes in the sporting sphere this year, including Judd Trump winning his World Championship title after beating John Higgins at the Crucible; being one of the host cities for the Cricket World Cup; and Gloucestershire Cricket’s promotion to Division One of the County Championship.

Inner-city surf haven The Wave opened after years of anticipation, planning and construction, and in rugby, Bristol Bears welcomed a record crowd who came together to watch them storm the West Country derby.

Tap Bristol launched in September for Bristolians to quickly and easily donate to help the city’s homeless, and Caring in Bristol announced a Caring at Christmas volunteer project to help those on the streets during the festive period – when most shelters close. It also announced it would be teaming up with top city chefs from restaurants such as The Pony & Trap, Box-E, Pasta Loco and Tare to create quality, zero-waste meals for the project.

Diversity and inclusivity in the community have formed a major focus throughout the year. 6,000 guests from all walks of life came together to attend the Grand Iftar in Easton during the summer, and amazing efforts were made by FareShare South West to help reduce food poverty among the city’s children, with additional fundraisers including comedy evenings headlined by the likes of Jon Richardson. Mental health was talked about more openly, the city got its own CBD café, sustainable fashion brands were launched, and Bristol made leaps in the field of farming technology, driverless cars, and the use of quantum tech to protect financial information.

Bristol’s somewhat controversial plan to be the first city in the UK to ban diesel-powered vehicles from parts of the city centre was also approved in the autumn with a view to drastically cutting air pollution after the city failed to meet clean-air targets. Meanwhile, in research, pioneering long-term health and wellbeing project Children of the 90s, whose data has been used in healthcare around the globe, got a funding extension for five more years of study, and University of Bristol appointed black history professor Olivette Otele as its first professor of the history of slavery to explore the city’s involvement in the transatlantic trade. The uni also demolished the derelict Temple Meads building that welcomed anyone arriving into the city by train, to make way for work to start on a new campus.

In November, Bristol Old Vic was packed to the newly renovated rafters for a very well-attended TEDx Bristol. The all-day programme featured inspiring, thought-provoking and useful talks on everything from disability-inclusive fashion, the dark side of offshore fishing, online harms in social media and the digital legacies we leave behind after we die. Speakers encouraged audiences to reconsider their relationship with artificial light for the benefit of their wellbeing and shared stories on environmental activism, health data, equality and representation.

Art at the heart

Bristol had a bit of a moment worldwide in May, when local artist Jody Thomas helped make the planet’s climate crisis even harder to ignore on North Street in Bedminster, where he completed his 50-foot-high mural of Swedish environmental activist Greta Thunberg on the side of the Tobacco Factory (see lead image from Pascoe Kelly-Sinclair/Upfest) – the same month that she featured on the front cover of Time magazine. George Ferguson, who started the Tobacco Factory project in 1994 as an experiment in cultural regeneration, said that on the project’s 25th anniversary he wanted to give a Bristol artist the opportunity to express its strongly held ethical and environmental principles on its 50-foot wall by celebrating the young people fighting climate change.

Later Jody put his own spin on the classic film poster for Jaws in Millennium Square to raise awareness of marine plastic pollution.

Elsewhere, at The Georgian House Museum, artist-activist Yoko Ono saw fit to grace us with her first solo exhibition in the city, linking up with local charities supporting vulnerable women who have been victims of domestic abuse. The Royal Photographic Society also set up its new HQ at Paintworks to make the city more of a hub for professional photography and improve public engagement with the society via a vibrant events, education and outreach programme.

A huge effort has been made this year by Bristolian businesses, organisations and individuals to reduce everyday impact on the environment – far beyond forgoing single-use straws – as sustainability has been brought to the forefront of many local policies and campaigns, and initiatives such as Replant Bristol’s #OneTreePerEmployee have been established.

At this year’s Glastonbury Festival, the biggest cheer of the Sunday afternoon arguably went to Sir David Attenborough, who made a trip down to Somerset to talk about the latest BBC Earth series Seven Worlds, One Planet and highlight why the conservation message is more important than ever. The new series premiered in Bristol in October, when Sir Dave returned to the West Country to introduce the first episode at Cinema de Lux in Cabot Circus.

It’s been a good 12 months for our ever-evolving arts venues, with the likes of Bristol Old Vic and St George’s enjoying and welcoming in new visitors to the impressive leisure and all-day dining spaces they have recently unveiled. In TV, Channel 4 found itself a home for its new creative hub in super-cool new development Finzels Reach and Bristol was well-represented on screen, with shows such as His Dark Materials and Sanditon being shot in locations including Blaise Orangery and The Bottle Yard Studios.

Naturally the city made plenty of musical memories with high-profile gig and festival bookings. The Spice Girls announcing Ashton Gate as one of the stops on their reunion tour created waves of excitement among fans of the ’90s band, who entertained despite biblical downpours. Meanwhile Massive Attack put on a very special one-off at the Steel Yard in Filton, and Bristol celebrated a decade of Pride in a new location on the Downs, which saw Mel C return to perform in the city once more (Sporty clearly can’t get enough of Bristol).

At the end of the summer, septuagenarian Grace Jones wowed a Bristol audience with her strength, stamina and unique brand of vivacity – hula hooping and stalking her way around the Downs Bristol main stage, and Idles capped a season of world touring, BRIT Award nomination and continuing meteoric rise with an electric homecoming show. Towards the close of the year, Team Boomtown returned to its Bristol roots with awesome new immersive venue Area 404 on Albert Road, then on election night, Idles teamed up with Bristol’s Beak for a gig at Marble Factory raising over £80,000 for homeless charities including Independent People which supports homeless 16 to 25-year-olds in the South West to live independently through housing, education, skills and training.

Got anything to add? Any new initiatives or 2019 projects that have escaped us, that you’d like to see added in? Let us know!