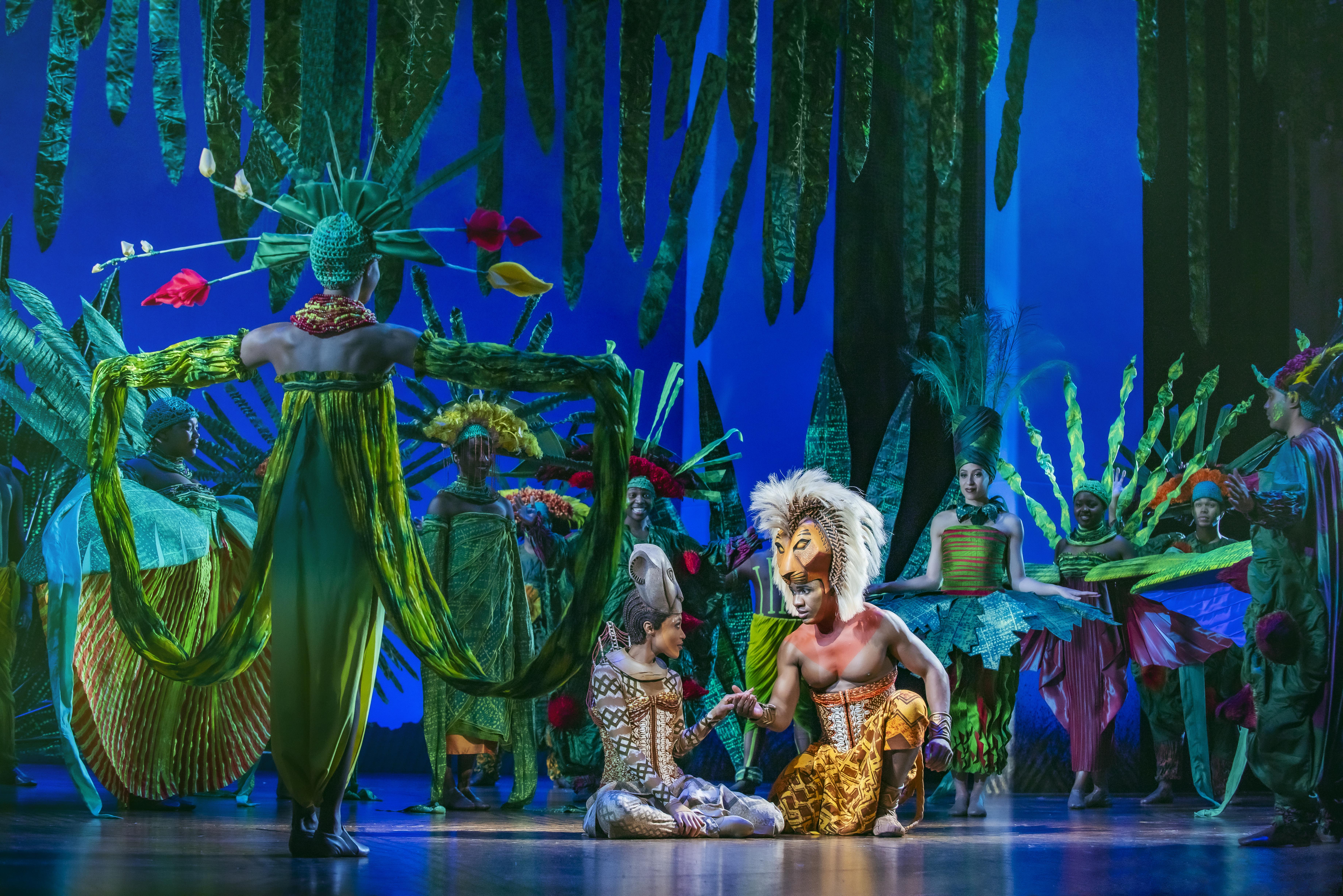 It’s seven years since the smash-hit stage production graced the city and this autumn it’s back with marvellous music, movement and mechanics and a superb cast including a Bristol-trained actor playing the show’s sneaky usurper. Words by Amanda Nicholls

There’s something about Elton John’s choice chord arrangements in Circle of Life that makes us well up before the chorus is even close to kicking off. Add in the inherent sense of joy and hope of its Zulu chant – key to the emotive power – and pretty much to-scale elephants, rhinos and all manner of other puppet mammals marching through the auditorium aisles at Bristol Hippodrome and you’ve quite the tear-jerker.

You could say The Lion King peaks early with this epic opener, invariably received with rapturous applause, but there’s plenty else to keep you rooted. The music (by South African composer Lebo M) and the mechanics alone are enough to carry the show, which sticks closely to the original dialogue, with the odd Somerset-based gag now chucked in courtesy of Mufasa’s avian advisor Zazu. The level of expertise in the actors’ operation of their animals is sky-high and hugely impressive, whether they’re stalking around giraffe-like on stilts, wheeling a herd along or rotating buzzards on poles up above. The choreography is another of the strongest elements and used to great effect to convey the movement and mannerisms of different species; the dancers bringing life to the gazelle contingent by continually leaping into attitude across the stage, a ballerina en pointe tiptoeing delicately past within a cage structure to portray, in the abstract, the giant ants modelled on it.

The distinction is in the details: the stage smoke used to create the look of savannah dust being whipped up beneath hooves during the wildebeest stampede; the shadow puppetry between scene changes; (spoiler) the streams of white-ribbon tears that the grieving lionesses pull from their eyes when their fallen king, Mufasa, is discovered; the movements of the dancers adorned with tropical leaves and doing a very convincing and amusing job as the jungle vegetation Timon and Pumbaa lounge among.

Later musical highlights come via power ballad He Lives In You and the exceptional voice of Thandazile Soni who plays eccentric mandrill Rafiki; and Chow Down, the pop-rock number sung by the hunched hyenas. These scroungers provide the puerile injection of humour and sass, as per the film, during their repartee with Bath-born, Bristol-trained actor Richard Hurst – suitably sneery as sneaky usurper Scar.

The show makes full use of the entire auditorium – with singers suddenly appearing beside the drummers in the viewing boxes stage left and right. All around us there are full-grown adults doing 360-degree takes of the space with expressions of childlike wonder, agog at the riot of colourful costumery, slick dance sequences, soaring choral vocals and tight live score.

The second act doesn’t have quite the same impact despite the perfectly charming comic routines of the friendly neighbourhood meerkat and warthog, which could probably do with a little updating as Zazu’s have had. It does seem like the majority of the story is stuffed into the first half and scenes such as Nala’s (beautifully sung) Shadowland solo end up feeling a bit like padding. Little Simba comes of age (enter the far less little, strapping actor Dashaun Young to take over the role) and develops an American lilt – a small snag but it’s difficult not to be bugged by this simple detail. The pay-off is the climactic fight scene between Simba and scrawny old Uncle Scar, staged up high on a cliff-like set piece above the effectual skulking silhouettes of the hyenas, as the lionesses turn on the scavenger army to end their reign.

When the idea of a stage version of the film was first floated, people in theatreland laughed it off, thinking it couldn’t be physically done; and the achievements of everyone involved in the adaptation, having translated it so incredibly well since it debuted in 1997, remain undiminished. It’s an undeniably dazzling, polished gem of a show, the nearest thing you’ll get to a West End blockbuster in Bristol and something that should absolutely be experienced this autumn.

The Lion King runs at Bristol Hippodrome until 23 November

Previous
The thrill of Vegas