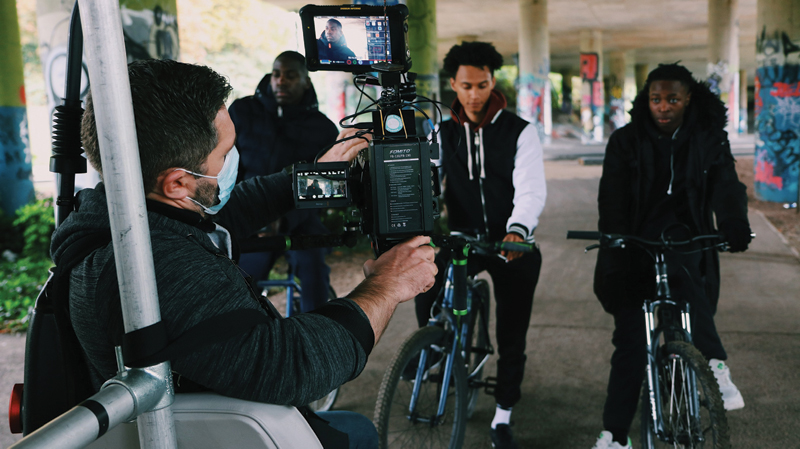 4 all of Bristol: Channel 4’s first year at Finzels Reach

Channel 4 got more change than they bargained for when they moved to Bristol in the year a pandemic struck. Nevertheless it’s brought out the best in the city, says the channel’s factual commissioner and head of the Bristol hub

Around a year ago, Channel 4 had just moved a huge swathe of its output – specialist factual, factual entertainment, features and formats, documentary, drama and daytime – to Bristol to help ensure a less London-centric future of telly-making and build on this city’s thriving TV production sector.

The year of the pivot for many people, 2020 was no different for the broadcaster, which faced a difficult financial period due to the pandemic but managed to end on a high with a healthy financial surplus. The pathway to its digital future, recently set out via a new five-year strategy, includes new targets to double viewing on digital platform All4 by 2025, and a global format fund to invest in UK-produced formats with worldwide potential. Future4 aims to increase content streaming with new revenues underpinning its reach and self-sufficiency. The idea is to ensure C4 can continue delivering distinctive content at scale, meet its public service remit in a more competitive digital viewing environment and create change through entertainment that challenges, and represents unheard voices. Founder of Marble Films, and now head of Bristol’s C4 hub, Sacha Mirzoeff told us more.

TBM: How’s the first year been? How did the pandemic reshape it?

Sacha: I was working as head of an independent TV company before this year, having lived in Bristol for over 20 years, then Channel 4 came to Bristol and got in contact. I thought them being here was such an exciting proposition – I’ve always believed in what they do and stand for, the way they take risks as a channel and give a voice to underrepresented people. I thought I should give it a go, and spent so long thinking through every eventuality about what the year might bring… Life is full of surprises and it’s been some year – I’ve spent three quarters of it in my own house! But it’s been brilliant; we’ve been able to continue with production in the vast majority of cases and had some outstanding films go out. It’s somehow brought out the best of British and the best of Bristol.

The Doghouse is a lovely, warm series made in Bristol by Five Mile Films about rehoming stray dogs but it’s really about the people who come and collect those dogs and what’s going on for them. We do feel people need the equivalent of a hot chocolate to take them away from the misery of the world at the moment. We have First Dates now being made out of Bristol – Twenty Twenty, the company that makes it, has moved fully down here, training up a load of editors to work on the show. That’s as important to us as the actual programmes, that we’re changing workforce on the ground here, and who’s working in the TV industry; bringing a wider range of voices from different communities.

Have there been any pandemic positives?

With Zoom, you can be a company in North Wales and have exactly the same kind of access to Channel 4 as a company in Soho; there’s a uniformity of access. The idea of the hubs was to cut down on all the travelling to London that independents were doing; for what was often a half-hour meeting with a pressurised commissioner. But our workforce is made up of freelancers – the creative blood of this industry, the people who make productions sing – and the past year has been extraordinarily challenging for them.

The Doghouse is a lovely, warm series about rehoming stray dogs but it’s really about the people who come and collect those dogs

What’s been your most fulfilling or feel-good factual commission?

The Year That Changed Love made by Bristol company Keo West. Positive, uplifting stories about love in lockdown; so sweet. Coming up in spring we’ve got a new craft show called Good With Wood made from Bristol by Plimsoll Productions. It’s really fun – the contributors produce extraordinary bits of work in a matter of days.

How’ve you integrated into the city? Has it been a warm reception?

Extraordinarily! We’ve been welcomed with open arms on every level; local government, community, individuals. People have been patient with us as well, it’s been hard to engage locally this year. We’re keen to find big, universal stories that still have a very local setting. Derry Girls is a good example; it works across the world but is so clearly set in one place. Part of the Bristol hub is about finding those voices; stories that are supremely local. I love working in communities that probably don’t get enough representation but have brilliant characters and brilliant stories to be told. Bristol has been traditionally known for a small number of areas in the centre and I’m equally interested in hearing about areas that don’t get the headlines. This has been a tumultuous time for the city, especially with the statue coming down; and I feel like we’re culturally leading the world in some respects at the moment which is very exciting.

How was it to be a TV maker in the thick of a global news moment?

It was a massive advantage. It was like it was meant to be; we were so aligned with what’s happened in so many ways. We were able to react very quickly so within a week of the statue coming down we were commissioning programmes, but we wanted a filmmaker with a real insight into the issue. We were fortunate to work with Michael Jenkins (Blak Wave Productions), who had been in the process of making a film about Colston for many years already. From within the community here, he knew the subject matter really well. Him doing that story gave it a different level of authenticity. He was out on the day filming anyway and we were able to tell his story, and the city’s story in a sense, with a series called Take Your Knee Off My Neck.

What actually happens in the new Finzels Reach hub?

No filming takes place in the Fermentation Buildings; we commission local independent companies to do that. It’s where commissioners and office staff work from. All being well, we’re due to open again early this year. It’s central and easily accessible and part of its purpose was to have a semi-open house. We wanted to hold events and have people in, engage with community and be more public about being here. We offer support and training for people coming into the industry through our new arm 4Skills. Although Bristol is a world-leader in film and TV, it’s a narrow section of society that’s traditionally worked in it and we’d love to facilitate different kinds of people coming in. There’s lots of brilliant work going on in that way already and we’re not looking to reinvent that or take over, but to work alongside it.

What will the new digital-first strategy mean for the viewer?

It’s an important change of strategy that has the viewer in mind. You should be able to binge more on boxsets, find what you like a lot easier; our digital platform All4 is going to have greater importance for us and should become more user-friendly. Figures there are booming but we want to future-proof ourselves. Our digital arm, now up and running, will be doing original content this year which is another different revenue stream for us.

Are you able to take more risks when commissioning for digital?

I think we should take risks across the platform and don’t think we’ve stopped taking risks on the main channel despite it being a challenging time, but yes. We’re working with a new talent in documentary terms, Yinka Bokinni – who did a brilliant film about Damilola Taylor and her reflection on that as a young child. She’d done a podcast, worked in music and radio then found TV and that development of talent through digital is really important for us. Often it’s hard to break talent straight away to our 9pm prime slot; digital allows us to engage with people closely in a meaningful way before they’re exposed heavily in the main schedule.

Our workforce is made up of freelancers – the creative blood of this industry, the people who make productions sing

Tell us about the Bristol recipients of the emerging indie fund

They’re four companies representing the breadth of talent in Bristol – drama company Indefinite Films; documentary companies Drummer TV (with a brilliant record of developing skills and nurturing talent) and Blak Wave (new, exciting and one year old, now, like us); history experts Proper Job, recently set up and run by long-standing Bristol producer-director Harvey Lilley and journalist Patrick Bishop. They’re happy not to be jumping on £100 trains to London anymore! Secret History is going through a big relaunch this year. It’s all about fresh journalist revelations on historical events that make us see them in a new light; see what we’ve learnt, haven’t learnt and can do better.

What impact has C4 Bristol had so far? What’s planned for its future?

I think we’ve landed really successfully given the extraordinary circumstances. Our team is strong, there’s a brilliant raft of films coming out of Bristol, some with first-time directors; a huge range of work. This year we hope to be far more engaged across the city and surrounding areas in terms of how we push out into the communities more, with a new workforce on top-level productions.

Next
The Velvet Mafia: The Gay Men Who Ran the Swinging Sixties
Start typing to see results or hit ESC to close
bristol gender film tv history
See all results