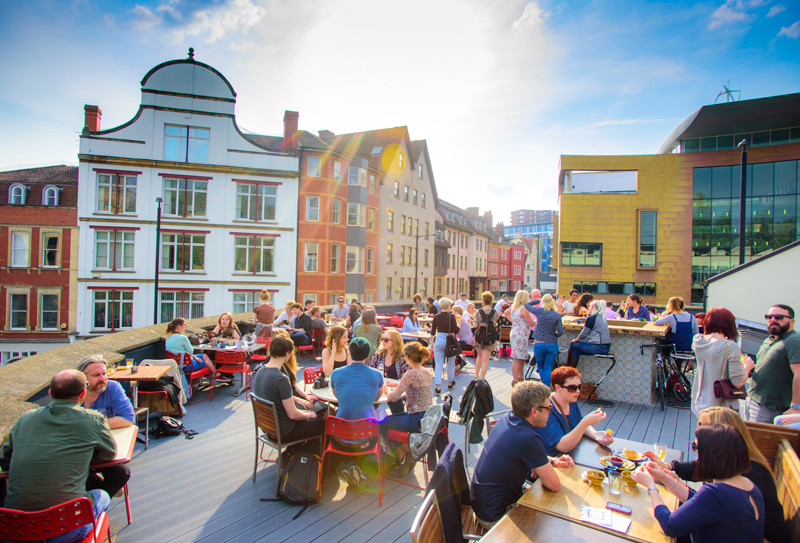 The simple joys of summer in Bristol are something we could wax lyrical about for quite some time – and right up there is the divine pleasure of sitting, supping and snacking alfresco in the outdoor spaces belonging to its brilliant bars and restaurants

Whether it’s a rooftop retreat at an inner-city oasis, waterfront idyll or pretty urban patio from which to watch Bristol buzz by, it’s a truth widely acknowledged that there’s nothing much better than a leisurely afternoon moseying around the city’s fine establishments when the sun shows its face.

Needless to say, there’s just not the page space to big up every spot that’s close to our hearts (especially at the rate they open here and, anyway, surely fun in the sun at Cargo and Wapping Wharf goes without saying) but this issue we’ve picked out a few choice suggestions from the plethora angling for your attention this season.

1) For: A tranquil harbour suntrap

Independent gem Broken Dock is top of many a local foodie’s to-dine list, and word has quickly spread of its award-winning roast dinners (think honey-glazed pigs in blankets, roasted root veg, goose-fat roast potatoes). Soak up the sun in the outdoor seating area overlooking the harbourside – such an enviable view – and if you fancy a few nibbles, take a glimpse at the grazing menu, with the likes of salt and pepper squid, parmesan chips and sticky ribs to name a few options. Delicious local ingredients feature across the menu, and whether you’re brunching with friends or enjoying dinner with a loved one, we feel quite strongly that you can’t let this summer go by without a visit…

2) For: Banging brunch and buoyant beats

Bambalan is a beloved part of the Hyde & Co family although no longer the baby, with Seven Lucky Gods having just come along in Wapping Wharf. This cool and colourful Colston Tower-based customer is, without doubt, the one if you’re in need of summer party vibes, with DJs on the terrace every Friday and Saturday. (Last month they had none other than Norman Jay MBE gracing the decks!) But there’s also a new summer menu – the new vegan bab is a stand-out dish with Vietnamese marinated tofu, Asian-style slaw and peanut vegan mayo – including sharing boards of sticky chicken wings, juicy meatballs and hot flatbreads with dips for chowing down on with an after-work craft beer or
cheeky spritz.

When The Ostrich – dating back to 1745 – was built into the sandstone cliff face of Redcliffe Hill, it became a firm favourite with the sailors, merchants and dock-workers who frequented the dock-side inn.

Some say it was named after the market stall that sat in front of the pub, selling only feathers. Others claim the name derives from Oyster Reach, by which the nearby Trimm Mills pond was once known. Perhaps, most likely, it got its moniker from the ship of the same name that would moor close by. Surviving a fire in Victorian times, and the demolition of many close neighbours, The Ostrich remains one of the city’s longest running establishments and, with its own cave connected to Bristol’s famous interlocking caverns, its walls are steeped in history.

Recently Butcombe Brewery got Joseph Hanna of The Cottage in as GM and revamped the place; it reopened in April with a fresh interior and new menu from head chef Jasper Prickett (previously executive chef at The Urban Standard). The outdoor bar and airstream van in its 482-seater garden serves Americana-style street food along the lines of loaded fries, soft-serve ice cream and boozy ice pops, while British pub classics, smoked, grilled and roasted meats, sharing boards and small plates are available indoors.

Perch on striped deck chairs and bright benches, among barrel tables and festoon lighting and enjoy a pint of the new Ostrich Ale, seasonals from the brewery, or your pick of over 30 rums as a nice little nod to all those sailors who passed through its doors back in the 18th century.

If you’re thinking less impromptu and looking to arrange a slightly more formal alfresco affair in advance – a place to take the team at work, perhaps – Brunel’s SS Great Britain is ideal with its charming views and different dining options for summer events. Think Pimm’s on arrival, tasty barbecue grub and a private bar, with entertainment options too. Or, if breakfast is more what you have in mind, try a ‘sunrise social’ on board – we can’t think of many more motivating backdrops. Nibble and network on the historic weather deck and start the day right with fresh breakfast rolls, granola, smoothies, fruit and muffins until 9am (from £25pp plus VAT for up to 30 guests).

Want to wow? Book exclusive use of the ship and host a first-class drinks reception on the sunny deck, among the serene swans swimming below and, above, hot air balloons floating peacefully by.

On 6 June, the Decks, Decks and Deckchairs event will feature food, drink and DJs for reclining guests (7-10pm, £8).

5) For: A hidden rooftop escape

Somewhere else to consider if you want to abscond from the daily hustle and bustle is the Urban Roof Terrace, tucked away atop the Bristol Marriott Hotel City Centre. A great shout for unwinding with an after-work drink with colleagues or friends, it has a happy-hour deal from 4pm to 7pm every day, when you can get two cocktails for the price of one – and this extends across the whole menu rather than just a few select libations. Inspired by Bristol street art from the popular local graffiti artist Cheo, and bedecked with twinkly lights, the space has super city views to offer as well as a relaxed ‘back garden’ vibe that draws families and couples up to terrace level for a game of table tennis or Jenga, followed by a slap-up meal prepared by the Marriott chef.

Main image: Bristolians in the know flock to Bambalan’s terrace for brunch and beats

Previous
Celebrating 50 years – Space Steps: The Moon and Beyond at Royal Photographic Society