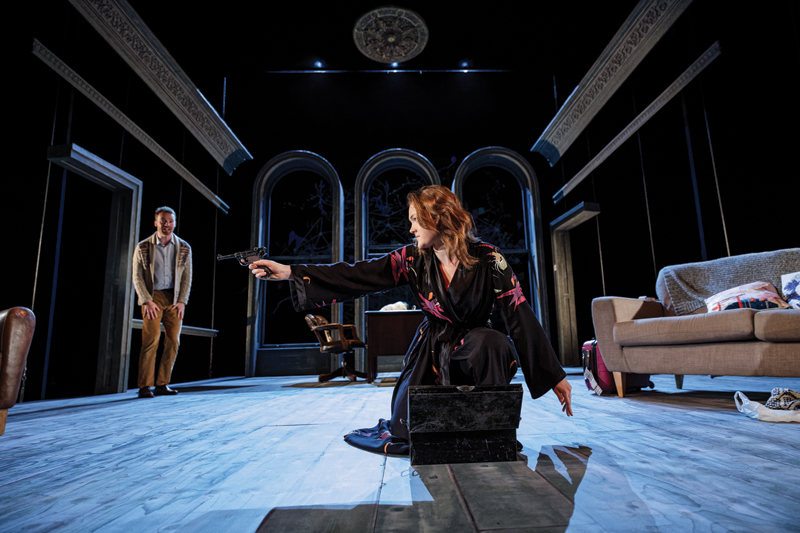 Bristol Old Vic Theatre School has clocked up 75 years producing the leading lights of the arts and entertainment industry. What does its diamond anniversary, and the post-Covid world, hold for the alma mater of Olivia Colman, Sir Daniel Day-Lewis and Sir Patrick Stewart?

Comparatively few Bristolians – adopted, or born-and-bred – realise the sheer number of stage and screen luminaries who have also called the city home while receiving world-class training. It’s often described as one of the city’s best-kept secrets.

Nestling on the edge of the Clifton Downs, and set back from the main road, stands a series of unassuming, late Victorian villas. Step a little closer and you may hear some melodic singing practice, or, in the summer months, glimpse sword fighting in the car park; venture closer still and you may just bump into a future household name. For Downside Road is the home of Bristol Old Vic Theatre School, a vocational training centre offering degree programmes in all things theatre, film and television.

The school’s alumni are in a league of their own: look beyond Queen Olivia Colman at the credits of Netflix’s The Crown and you’ll see that the up-and-coming generation of Josh O’Connor (Prince Charles), Erin Doherty (Princess Anne) and Tom Byrne (Prince Andrew) are all Bristol trained.

Step a little closer and you may hear some melodic singing practice, or, in summer, glimpse sword fighting in the car park

Drama school isn’t just for those hoping to be the next leading man or lady. Also squeezing in at the Clifton site, you’ll find those training to be future stage managers, set designers, directors, production electricians, prop-makers, costume makers, lighting designers… and the list of disciplines is ever growing with new courses in voice studies and playwriting launching last year. Those specialising in film production and radio drama can be found at the school’s Christchurch Studios in Clifton Village – the former flagship BBC Radio drama facility – while those carving out a career (sometimes quite literally) in scenic construction and scenic art are based at the school’s workshops in Bedminster. Numbers are deliberately small to ensure students have the individual attention required to flourish; just 180 students are on the Theatre School’s roll at any one time.

Together, staff and students function as a producing theatre company, taking shows across the city and the wider region, and inviting practising industry professionals in to support the realisation of these productions. Some 200 performances are presented to the public annually including at Bristol Old Vic (from whom the school became independent in the 1980s), Tobacco Factory Theatres, the Wardrobe Theatre in Old Market, The Redgrave in Clifton and Circomedia in St Paul’s.

The versatility of the school’s artistic programme is something to behold, with main-house productions, touring shows, and children’s theatre all in the mix. This spring’s offering includes a devised re-telling of The Pied Piper Of Hamelin (ACTA Centre, Bedminster), John Osborne’s disillusioned classic Look Back In Anger, through to Charlene James’s 2016 Cuttin’ It, exploring issues of cultural identity and female genital mutilation (both at Bristol Old Vic’s Weston Studio).

Those providing the magic off-stage or behind the camera are often the lifeblood of the arts industry. Look through the end credits of those shows that have provided much-needed escapism during lockdown and you’ll see BOVTS-trained creatives throughout: Dan Winch, executive producer for ITV’s millionaire-heist drama Quiz; Ita O’Brien the pioneering intimacy coordinator on BBC’s Normal People; and Erlend Webb, the head rigger in charge of the flying scenery on each Saturday outing of Strictly Come Dancing, to name but a few. In the 21st century the school’s name has become something of a misnomer, with graduates equally likely to be employed in the film and television industries as they are in theatre – welcome news for those looking for opportunities to be part of the creative economy.

Despite the live events industry being upended in the past months, 2020 proved to be an exciting year for the school. The summer saw the arrival of Fiona Francombe, the school’s first female principal and the founding director of Bristol’s Bottle Yard Studios; in autumn it unveiled plans for a new master’s programme in screen acting, the launch of which coincides with the school’s anniversary in October.

Look through the credits of shows that provided lockdown escapism and see BOVTS creatives: the executive producer for millionaire-heist Quiz; the pioneering intimacy coordinator on Normal People

Covid has done little to dampen its spirit, prompting an evolution of sorts in artistic practice. Starting with rehearsed readings over online platforms in the spring, progressing to pre-recorded streamed productions in the summer, autumn finally saw students treading the boards again for fully staged livestream productions which played to several thousand members of the public. Students confidently captured the magic of live performance for those watching from the safety and comfort of their own homes and look forward to in-person audiences again this year.

With this school an integral part of the creative fabric of Bristol, the future of the arts industry is in some very safe hands.

Previous
Not your muse: an interview with Celeste