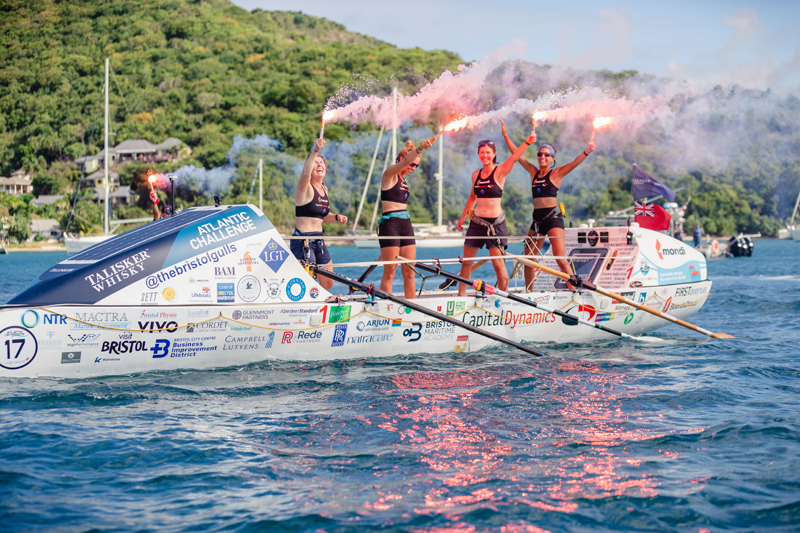 A moment in history: The Bristol Gulls’ eco-boat triumph

More people have been to space than rowed an ocean so when the Bristol Gulls became the first ever crew to row across the Atlantic in an eco-boat, history was made. Millie Bruce-Watt caught up with the trailblazers…

Bristol’s very own all-female four-boat, the Bristol Gulls, have made it into the history books after rowing 3,000 miles across the Atlantic Ocean – in a boat made of 10,000 recycled plastic bottles. For what has become known as the world’s toughest row, 20 boats took part in this year’s Talisker Whisky Atlantic Challenge, which saw Sofia Deambrosi, Lorna Carter, Phoebe Wright and Sarah Hunt spend nearly 47 days at sea.

The crews, which comprised of solo rowers, pairs, trios and fours, set off from La Gomera in the Canary Islands on 12 December, with the first boat arriving in Antigua just four and a half weeks later. Along with the Gulls’ eco-boat, this year’s race saw a number of world firsts. The crew named Row4Cancer became the fastest pair to row the Atlantic in just 32 days; Jasmine Harrison became the youngest woman to row solo across any ocean at just 21; Frank Rothwell, 70, became the oldest person to row the Atlantic solo; and the Gulls’ skipper, Sofia, is now the first Uruguayan to ever row an ocean.

Together, the Gulls survived seasickness; battled scorching temperatures; endured relentless 30-foot waves; and overcame capsizing to raise awareness and money for the RNLI in Portishead and Clean Up Bristol Harbour. Just a few days after the Gulls stepped back on land, we caught up via Zoom with Sofia, Phoebe and Lorna, who were at the harbour, enjoying the Caribbean’s sun-warmed waters.

“We all feel a massive sense of pride in ourselves,” says Phoebe; “it’s such a team effort. You’re totally alone out there so it was a massive achievement that we got through it, with amazing memories and still amazing friends.”

On becoming the first Uruguayan to ever row an ocean, Sofia beamed. “I’m just super proud. It’s awesome to be representing the country. We’re representing so many things; Bristol, Uruguay, England, Scotland for Sara but also we’re the first eco-boat to ever take part in the race – and hopefully the first of many.”

The Gulls’ eco-boat sits at the very heart of this adventure. Appropriately named Vaquita after a critically endangered porpoise found off the coast of California, the Gulls’ achievement proved that a boat made of sustainable materials could house and propel four people across the world’s second largest ocean – all while battling the unforgiving elements. The boat, built by Rannoch Adventure, was constructed using renewable energy. It had no engine; the crew used a solar-powered desalination unit to convert seawater into freshwater, and its foam core was made up of recycled plastic bottles. Their motto, painted down one side, read “trailblazing sustainability”.

“What that meant is that we’re willing to put ourselves in a more vulnerable position to try it out,” explains Phoebe. “We really hope that in following years, other rowing teams will see that it’s not that hard to be sustainable on the boat.”

“Rannoch Adventure basically took their standard model and just modified the materials and manufacturing processes to be more sustainable and have less impact on the environment,” adds Lorna. “Then they looked at their supply chain and spoke to more eco suppliers and introduced some plant-based resins – it’s really cool what they’re doing and it’s been really fun for us to put it to the test on the ocean. We really hope that the processes can be made more standard.”

Although the Gulls admit that not everything they used on the boat stood the test of time on the ocean, with some sustainable food bags failing to withstand the occasional leak on board, the team are proud to have taken the first step in pushing the marine industry into a more sustainable place. “There is a reason why the marine industry is a little bit lagging in terms of sustainability and we experienced it first-hand – some stuff got wet, some food got spoiled, and if it had been in more durable plastic packaging it would have survived. For us, it is awesome to have all these lessons learned and share the things that did work with other teams. And the things that didn’t work, we can go back and look at how they can be improved.
On their quest to revolutionise the industry, the Gulls also ensured they lived as sustainably as possible while on board. They went to local retailers to ensure that their clothing was sustainably made or second-hand and their food packaging was recyclable. They ditched single-use plastics and used sun cream that was ocean-friendly.

At one point, we were surrounded by orcas and had whales swimming under us. You just realise how human beings are so powerless in nature

“We wanted to prove that if you go to the effort of choosing things that are from a better place it’s not that hard to make a difference,” says Phoebe. “If everyone were to swim with sun cream that doesn’t harm reefs and didn’t buy new clothes for every single sporting event, we’d make a big difference.”

It was an unusual festive period on Vaquita – and although they spent Christmas Day battling strong winds, the crew managed to celebrate with a few traditional home comforts. “We did secret Santa and had Christmas cake and one half of a soggy mince pie, which was incredible! On New Years’ we learned Auld Lang Syne properly and we sang it, a lot. Every day was kind of the same, you only see a few new things so on New Years’ day we stopped and gave each other a hug.”

Rowing under the stars; learning to live in the small confines of the boat; feeling vulnerable to the sheer size and power of the ocean and the beings that live within it were all factors that needed to be overcome and experiences that made the adventure ever more unique. The team speak so vividly about the night sky, in particular, it was clear that it was a truly enchanting sight to see.

“Some nights the moon was so bright it was like dusk the whole evening – it was perfect brightness on deck – the night sky was one of the most incredible things. At the very beginning, there were quite a lot of meteor showers so seeing stars coming through the atmosphere was really incredible,” they explain.
“You do feel very vulnerable,” says Sofia. “You’d have these 20-30 foot waves rising up behind you and then crashing over you. It made us realise that we are so tiny and insignificant. The ocean has complete control over you. It’s very humbling. At one point, we were surrounded by orcas and had whales swimming under us. You just realise how human beings are so powerless in nature.”

One night, the Gulls did experience just how powerful nature can be. While Sofia was alone on deck, rowing through the night, Vaquita was destabilised by relentless rolling waves, forcing the boat to capsize.

“It was really rough sea so we couldn’t row two people up,” Sofia explains. “We had a bunch of waves that came together. The first one was really big and destabilised us and the second one just went over the stern completely. We were vertical and water just flooded the deck. The boat couldn’t handle it and it spun but by the time I realised what was happening, I was under the boat and then by the time I blinked the boat was turning again.”

In the retelling of the events, the team’s resilient mind-set and positive attitude shines through. Although they broke an oar and lost some essential items including food, gel seat pads and equipment to the Atlantic Ocean that night, their spirit never faltered.

It is no secret that the Talisker Whisky Challenge requires not only a high-level of physical strength but also unwavering mental durability. The Gulls rowed in two-hour shifts for the majority of the race and recruited Michelle Obama, Stephen Fry and Steve Backshall to keep morale high. “We listened to loads of audiobooks about adventurers. We tend to like books about inspiring people who have done cool things so there was a theme of that. We also listened to Mythos by Stephen Fry and we were looking at the sky while he was talking about the planets and the stars and I guess we felt really connected with it,” says Sofia.
Intense is how the Gulls describe the moment they saw Antigua on the horizon, after nearly seven weeks on board. “I got this weird flashback of two and half years of preparation and training,” says Sofia. “It all boils down to that second when you cross the finish line and you think, ‘I’m done’.”

“It was an amazing experience and the welcome was brilliant,” adds Phoebe. “The boats that were moored in the harbour were all beeping and cheering, the organisers did an amazing job with the welcome and with the flares.”

The race was unequivocally a life-changing adventure for every rower that took part, one that will never be forgotten. Each saw some of the most extraordinary sights that nature has to offer; they witnessed its power; felt its cruel sting; were humbled by its sheer size; and embraced its serenity and grace. As a pandemic continues to shake our world, the opportunity to connect with nature was undoubtedly a welcome tonic.

For the Gulls, some well-deserved R&R is on the cards. Vaquita? She is set to compete again next year, having been sold to a team championing sustainability in the marine industry and beyond. The money made from the sale will go towards the Gulls’ two charities, both of which are working tirelessly to raise awareness of plastic pollution and drowning prevention.

Over the years, the Talisker Whisky Atlantic challenge has seen ex-military personnel, athletes and sportspeople take on the task of a lifetime. The Gulls making their way to Antigua was an inspiration to all who watched. “For us, the point was that anyone can do it. We didn’t just think overnight we’re going to go and cross an ocean – it was a lot of hard work – but it doesn’t matter where you start, you can always get there.”

You can still donate to the Bristol Gulls’ two charities – Clean Up Bristol Harbour and the RNLI Portishead – at thebristolgulls.com