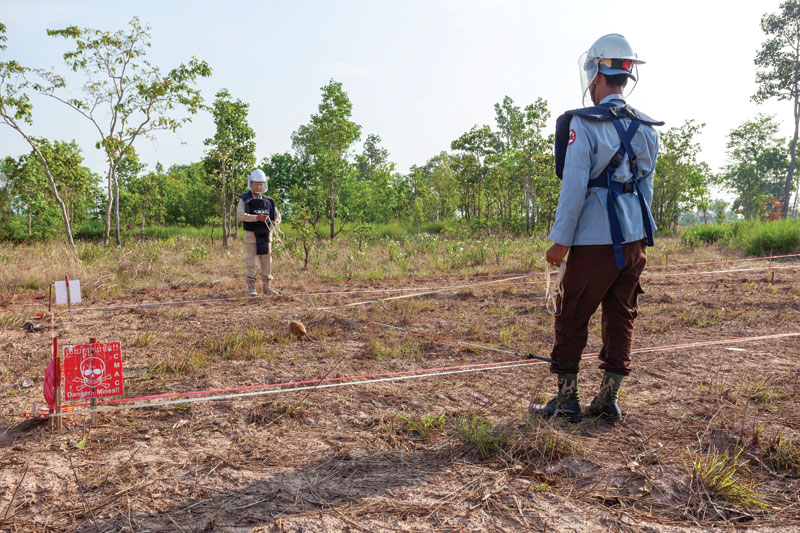 Following the 2020 BAFTA Student Film Awards, Millie Bruce-Watt speaks to finalist and UWE graduate Bethany Staley, whose short film documents one charity’s mission to clear Cambodia of landmines with the help from some furry friends

Aspiring environmental filmmaker and now student BAFTA-nominated director, Bethany Staley is part of the next generation of talented and innovative creators shining a light on some of the world’s most important yet largely untold stories. While studying a masters degree in wildlife filmmaking, Bethany set her sights on a Cambodian charity working tirelessly to rid its country’s landscape of unexploded ordnance that fatally injures men, women and children on a daily basis – 31 years after the Cambodian-Vietnam war came to an end. Bethany’s 12 minute and 17 second-long film, titled Scratching the Surface, delves into the work of the Belgian non-profit charity, APOPO – which has formed an unlikely, but vital, allegiance with African giant pouched rats – and follows the stories of those who live alongside the landmines and adapt to the devastating effects that they have on their everyday lives.

Having been interested in the idea of human-animal relationships since studying an undergraduate degree in human geography at Cardiff University, Bethany was drawn to APOPO after discovering its relationship with the rats. With an extraordinary ability to detect TNT from the ground’s surface and light enough to walk over the mines without setting them off, one rat can search the size of a tennis court in 30 minutes – an area that would take a human four days to negotiate.

“I knew I wanted to make a film about the relationship between humans and animals and I knew I wanted to explore that subject in a very positive way,” Beth says. “A lot of the stuff we see on TV at the moment is about human-animal conflict, about tigers in Indian villages, for example – and it’s really important to show the stories because they’re issues that we need to address – but, I thought, there are so many stories about humans and animals out there, how can I take this subject matter and actually flip it on its head and show human and animal cooperation and show how important animals are to us and the need to protect them?”

The giant rats are of invaluable assistance to the entire operation and, since APOPO launched in 1997, they have helped clear 13,200 mines from Tanzania, Mozambique, Angola, Columbia and Cambodia – saving countless lives across the world. “These animals are nocturnal so they can only work for about two to three hours a day from 4am to 7am. The rats’ ears and skin are so sensitive because they’re nocturnal animals – they’re not used to being out in the sun – so the handlers make sure they sun cream their ears and their tails, which is really sweet. They have a really good bond.”

After contacting APOPO, Bethany set up a crowdfunder for her shoot, before finally raising enough to fly to Cambodia in April 2019. “I spent about two and a half weeks out there, mainly in Siem Reap, which is where APOPO are based. I filmed on their training field and at the rehab centre as well. Then we went up to the north-west border of Cambodia, where it borders with Thailand. That’s an area called the K5 Mine Belt, still one of the most densely mined areas of land in the world. To see the work they were doing out there was just incredible.”

While filming on the mine belt, Bethany spoke to local villagers, farmers, parents and families whose lives revolve around the landmines, documenting their reality. “The amazing thing is I had no idea what a minefield would look like, really, and then I got out there and I just had in my head that it was going to be this kind of desolate area of land, there was going to be nothing, but when we got there, they were clearing the landmines in the middle of this village. There was an active minefield, which was all cornered off while they were working, but about 300 metres to the right there was a house with a family, with kids running around in the garden. They were running around happily but it was shocking that people still have to live in an area that is littered with landmines.”

While following the work of APOPO, Bethany also spent time at a rehab centre, set up by the Persons with Disabilities Foundation, where she documented the lives of survivors who are learning to live with their life-changing injuries. “It’s incredible to be able to talk to the villagers. I spoke to one man and got his perspective of what APOPO was doing with the rats and, firstly, he was so shocked that rats are clearing landmines, which you would be, but he was just so unbelievably grateful for the work that APOPO was doing out there because it means that, once his area is safe and the mines have been cleared, he can start farming again and he won’t have to worry about his kids and their future.”

It was Bethany’s course director, Peter Venn, who put her short film forward for the BAFTA Student Film Awards this year, unbeknown to Bethany until she received an email about being a finalist. Bethany was one of nine finalists selected from almost 700 submissions from film schools in 35 countries. “I didn’t actually realise he had submitted our films into the BAFTAs so when I got the email to say that, firstly, I was shortlisted and then that I was a finalist, I was just so shocked. I had to ring him up to ask whether it was all true.”

The young filmmaker credits the wildlife filmmaking course, which is partnered with the BBC Natural History Unit, for putting her in the position she is today and for the opportunity to make Scratching the Surface. “It’s an incredible course, I learned so much on it and they gave me the opportunity to be able to make this film in the first place. There’s such an amazing array of filmmakers, producers and production studios in Bristol focusing on environmental issues and we’re really lucky that we have this resource in the city.”

The BAFTA night itself was a very “Covid experience”, Bethany explains, as the official ceremony took place via Zoom. However, she still feels honoured to be following in the footsteps of so many great filmmakers that made their first appearance as a finalist at the BAFTA Student Awards, most notably Ryan Coogler, who went on to direct the critically acclaimed superhero film, Black Panther. “It’s such a privilege to be recognised in that way. The night was different because it was during lockdown. Normally what happens is the finalists fly over to LA for the ceremony but, unfortunately, they couldn’t do that this year and did it as an online ceremony instead but we still got dressed up.”

Bethany looks forward to delving deeper into stories of the natural world, raising awareness of organisations protecting those who are suffering. “I’m still very much at the beginning of my documentary career but making films and making stories about the natural world and how humans fit into it is what I really want to do. Hopefully now, with the recognition from BAFTA, I’ll be able to keep making films and exploring social and environmental issues and highlighting stories from around the world that really need to be told.

“I wanted people to understand the impacts of landmines and how they continue to devastate countries even after the war has finished,” she says. “I wanted to change people’s perception of rats and take them away from thinking that they are these smelly, diseased animals, which some are, but these ones are really intelligent; they can smell landmines in the ground, they can sniff them out and detect them, they are so intelligent. I’m just trying to emphasise the value in animals and wildlife so that we can carry on protecting them.”

It is thanks to filmmakers like Bethany, who emerges with the next generation of filmmakers and storytellers, that we learn of often unseen perspectives and are made aware of issues plaguing people’s lives. Ultimately, they make the world a better place.

Previous
Season of the new starter: an interview with headteacher Paul Dwyer