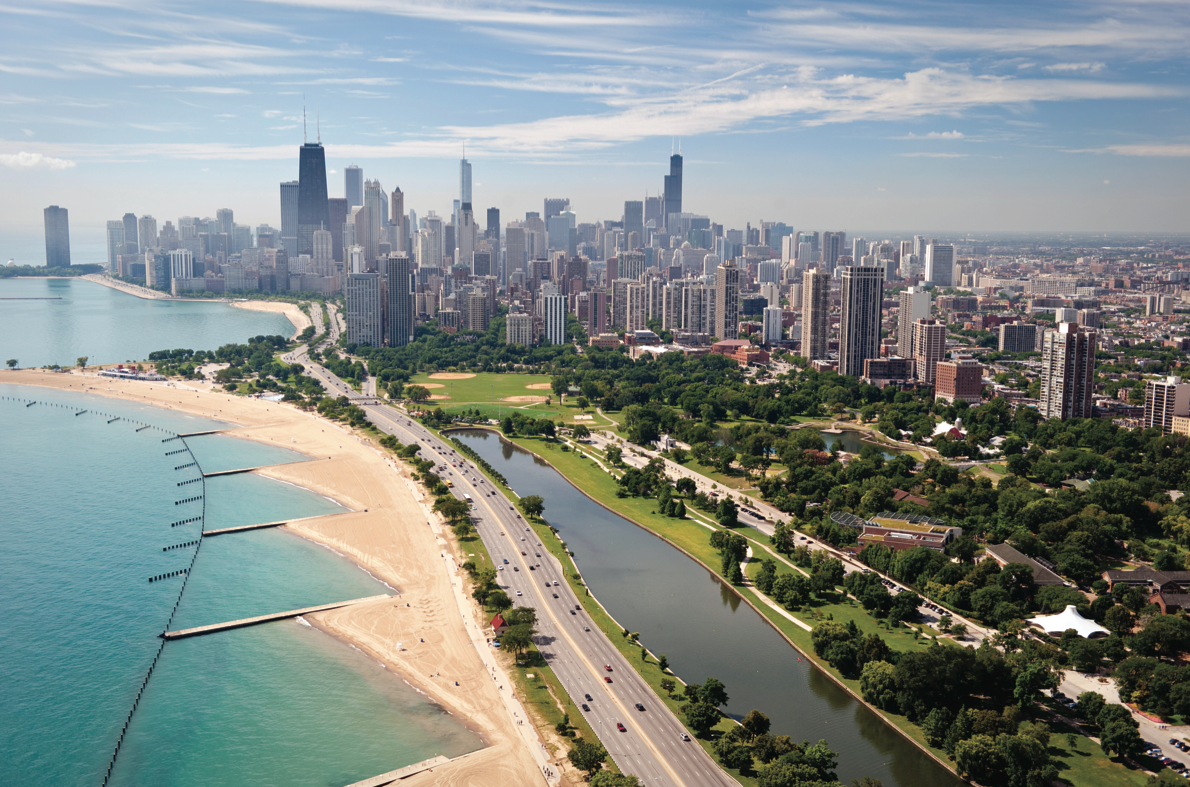 Travel: All the joy of Illinois

A charismatic cosmopolis of culinary, musical and sporting prowess, where beach buffs and suits hang out side by side: could Chicago be the States’ coolest, most underrated city? Amanda Nicholls is starting to think so

Chicago, Chicago; the toddlin’ town that baseball star turned preacher Billy Sunday – even with his smart little aptonym – could not shut down, according to Ol’ Blue Eyes. Sinatra was singing about the 15,000 or so underground speakeasies there were estimated to have been during Prohibition and, while the place is not quite as overrun now, it’s certainly not hard to find a party in Windy City. There’s even an Art Deco skyscraper (the Carbide and Carbon building on Michigan Avenue) designed to look like champagne bottle. Lively all-American watering holes blast out BB King and Buddy Guy as you pass by of an evening, if they’re not faithfully broadcasting the game for the baseball nuts tucking into beer and deep dish (the pizza-pie creation the region is known for). Meanwhile, a district along, you might happen upon a rich raft of craft breweries, comedy clubs and swanky cocktail-quaffing spots, ripe for exploration.

Yes, it might be a home of the blues (we defy you to discover a duff pub band) and the Midwest’s centre for music in general, as well as a major sporting city (it’s hot on basketball, football, hockey and soccer too) but there are far more strings to its bow and to size it up simply by its base elements would be to do it an injustice. Besides the melodies and the matches, any trip to Chicago should feature a thorough foodie odyssey, leave room to learn a little gangster history – more on Capone and cohorts later – and allow the architecture a look-in, at the very least.

Given the city’s reputation for structural design, it’s only right to allocate time to absorb it. Possibly the best way to do this is to wander down Wacker Drive and board the First Lady cruise, whose guides cheerfully interpret more than 50 buildings making up the Chicago River’s physical urban timeline.

Holiday romance: sailing through Chicago
“You just missed Beyoncé!” someone shrieks as we pass under one of the burgundy bascule bridges that straddle Chicago’s backwards-running river, our tour guide briefly pausing her explanation of how the city grew from a small settlement into one of the world’s largest cities in less than a century. We’re not sure if Mrs Carter is here on business or for pleasure but Chicago is a favourite vacay choice in the States, even if it’s still a little under the radar for Brits, and we’re quickly starting to see why it’s so popular.

It’s a visual feast, this little voyage, with Spanish Revival (see Wrigley Building, 1921) sitting shoulder-to-shoulder with a sundry of sawtooth edges from somewhere else entirely, and Romantic styles swirling round the melting pot with Midcentury Modern and Prairie. Greek, Roman, even Egyptian influences abound (the latter introduced after the discovery of King Tut’s tomb in 1922) while belvederes and flying buttresses borrowed from French Gothic cathedrals butt up against postmodernist ’90s creations, as we hear about the 1893 world fair and how the city erected the first Ferris wheel to show how much inward investment they’d attracted since the Great Chicago Fire.

Careful to protect their picturesque skyline, the Chicagoans have instated a conscientious caveat, we’re told as we sail by the Spirit of Progress statue, which means any commercial development attempting to muscle its way in must reserve a bit of the budget for public art. Poised to become a ‘megacity’ in the next 20 years, Chi-Town is seen as something of a laboratory for urban planning; and the weight of this is not lost on its placemakers. You only have to pop into its architecture centre (also on Wacker Drive) to see the thought that goes into its design today and why it really matters.

Another way to admire the metropolis is from the dizzying heights of Skydeck, found within one of the tallest buildings in the Western Hemisphere, Willis Tower. Whizz up to the 103rd floor in one of the world’s nippiest elevators and, if your nerves can hack it, step into glass boxes jutting out from the main building for panoramic views spanning up to 50 miles and four states.

To recap: it’s skyscraper central here. But that doesn’t mean you should visit Chicago sans swimsuit because there’s plenty of opportunity for indulging beach-bum inclinations with 26 miles of shoreline around the second largest of the Great Lakes – which actually doesn’t feel at all incongruous in the midst of the daily bustle. Lake Michigan tempts you with everything from volleyball and VIP cabanas to roller hockey, jetskiing and an 18.5-mile bike path with cycles for hire; who says you can’t have the best of both worlds on your city break? During holiday weekends such as Fourth of July you’ll see locals head out on the water on their little (or luxe) boats, racing about, diving off the sides, sipping on fizz and lounging like they’re Leo DiCaprio in The Wolf of Wall Street.

City of Neighbourhoods
This town certainly has its snazzy side. If you want to be ‘bougie’ there’s no shortage of hipster joints putting the chic in Chicago, delicately threaded throughout the City of Neighbourhoods, and each locale has its own distinct flavour profile. Don’t pass up the River North area and its antique stores, fine art and even finer dining, nor its sleek clubs and upscale wine bars. Cocktails at Sunda New Asian won’t go amiss (the Aperol, St Germain, blood orange liqueur, Moët, lemon juice and grapefruit bitters combo of Lady and the Champ is all sorts of lip-smacking); there you can also send for a super array of sushi or, maybe, plump for miso-bronzed black cod.

Also worth a gander is Wicker Park, for the nightlife alone. To achieve maximum buzz we suggest steamrolling some strangers at snooker in Nick’s Beer Garden before bar-hopping around clubs like Rainbo, passing gloved-up boxers sparring on the sidewalk as you go.

Despite all the towering edifices of downtown Chicago, it has a glut of green spaces – from Lincoln to Hyde Park and Humboldt there’s roughly 8,000 acres to explore. Even the rooftop of City Hall has itself some 20,000 plants; and all this illustrates another nickname in the collection; ‘city in a garden’. For a daytime stroll, you can’t go far wrong with elegant Millennium Park – where you can take in free classical concerts staged beside the steel sculpture and tourist magnet best known as The Bean – before you move onto a shopping spree along Magnificent Mile or nip up to Cindy’s Rooftop at the Chicago Athletic for a classy afternoon overlooking the leafy landscape. And if you overhear any discussions about the state of the LSD, don’t be perturbed: they’re only referring to busy Lake Shore Drive below.

Pitch perfect
You can easily spend a day in Wrigleyville, starting, if you’re wise, at Kanela Breakfast Club where you can order Greek doughnuts with honey and toasted walnuts or crab cake Benedict, and spicy feta omelette. Like your leisure time slightly rough and ready? Even if you don’t, stop in at Sluggers for a go in one of the batting cages and hone your baseball swing, or clap eyes and ears on its duelling pianos. Just across the street is the stadium from which this perky little pocket of Lakeview gets its name, Wrigley Field itself; built in 1914 in just four and a half weeks and one of the most storied stadiums in sporting history. The site of alleged ‘called shot’ in the 1932 World Series, it has played host to some of the game’s great moments; as well as Pelè, who made his first Chicago appearance there; and 40 ski-jumpers who once competed on the ramp they decided to put in.

We pass a group of pretzel-like locals doing yoga outside as we head in for the tour and soon see why sports enthusiasts should stick this one on the itinerary – followed, we reckon, by tacos and tequila at Big Star, the late-night honky-tonk opposite. The boutique place next door; that’s Hotel Zachary, inspired by the stadium’s renowned architect Zachary Taylor Davis. There was a real boom in new hotels in Chicago last year and this one, a few minutes from bustling Downtown and vast Lake Michigan, blends new and old, refined and comfortable with thought and character. During baseball season rooms start from $309 ($209 off-peak) but if you’re just passing by, it’s a good shout for a strapping coffee fix too.

Walk as much of the city as you can, but as with many sprawling US cities, you will find yourself tempted to taxi here, there and everywhere due to the sheer scale. Mix things up by making use of the overhead metro line that weaves its way around the city, propped up by iron arches that give the streets below a hit of extra character. Rattling along on the L (short for ‘elevated’) à la Rhett Miller, you can plan out your day – pie and biscuits (more of a bready, savoury scone to us) at Bang Bang on North California Ave, or a stroll around the vintage shops. Later, dinner and a show…

A colourful past
2019 is Chicago’s year of theatre and during the past few years, the diverse offering has developed to such a degree that it’s now seen as a match for New York. To feel fully immersed in American history, nab tickets for Hamilton (at the CIBC Theatre until January 2020) and watch the story of the USA’s founding father unfold to a dynamic musical score of hip-hop, jazz, blues, rap, R&B, and Broadway – learning how the West Indies immigrant became George Washington’s right-hand man and later embroiled in the new country’s first political sex scandal. Another theatre to pencil onto the to-do list is Victory Gardens, or the Biograph as it was known in its former life as a movie cinema – where notorious gangster and bank robber John Dillinger, who underwent plastic surgery to evade police, was finally shot down by FBI in 1934 after popping to the flicks.

To really delve into the city’s darker depths, hop onto one of its fun and informative gangster tours and swot up on the crimes that contributed to its chequered character – notably the St Valentine’s Day Massacre, after which Chicago became a symbol of corruption in the US. It’s interesting to discover that Capone only really became poster boy for the underworld because, rather than being its undisputed king, he could never keep schtum or resist boasting about his exploits. Other highlights include the fast-food joint with the special extra on the menu and Frank Nitti’s vault, with original newspapers from the period as well as a secret passage used for dodgy dealings.

With a stately urban skyline offset by lush greenery and vast water features, plus flourishing foodie talent and pitch-perfection in terms of music and sport, just for starters, it’d be a wonder if you didn’t want a piece of Windy City. As palatable for city slickers as for those into their sun, sea and sand, Chicago is a serious contender for coolest and most underrated US destination.

Whistlestop foodie tour?
A few more places to consider when dining out