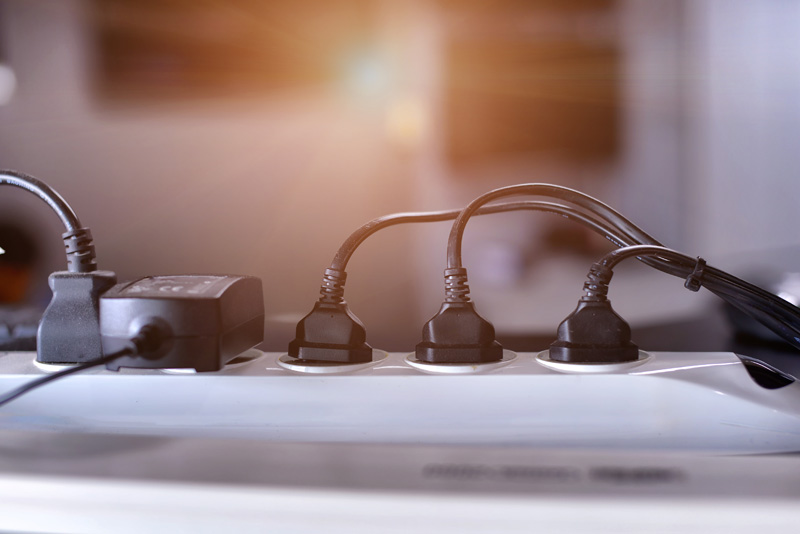 All wired up at home

Maria Samuels is worried about wires. They seem to be taking over. Or is it just that she is spending too much time at home and is noticing them more?

The other evening my co-worker (as in family member who I am isolated with) tripped over the very sturdy flex that is running from our living room by the TV through two doors to a socket in our kitchen. It was quite dramatic. The fall went as follows: trip, lunge face first, and skeleton ride along part of polished boards of hallway with file of papers as a toboggan. My co-worker wasn’t hurt, just a bit shocked and surprised.

I’ve no idea why this flex is there, but another co-worker tells me that it’s essential to getting a good reception on the TV. This flex is a very assertive sort of flex, the emperor of flexes, as it were. It is so thick that it can do a curl mid air, several times from its lengthy passage from one room to another. Which makes it much easier for the flex to entrap and trip up innocent passers by.

The problem with the emperor flex, apart from the tripping hazard thing, is that it’s impossible to close either door that it passes through. And it often gets trapped beneath one of the doors as someone tries to ensure a little privacy in their co-working haven so it’s quite hard to move the door at all. I know (because I’ve seen pictures) that some houses secure such flexes neatly at the base of their skirting boards with little flex clips, and drill neat holes to feed essential flexes through from one room to another. I am even told that it is possible to buy special contour skirting boards to hide electric flexes – but I suspect this only works for new builds, as you’d have to be very short of time to remove all your existing skirting boards and replace them with contoured ones.

Certainly none of this disguising of flex activity goes on in our house. In fact every room apart from the bathroom (please note thorough research) has a wire-based installation of some description, often with very three-dimensional qualities. The flexes and wires range in thickness from a few millimetres to almost a centimetre and in colour from red, yellow, white/dirty, black, grey and some of them have a sort of twisted slub arrangement for extra snazz.

Being wireless is a good thing, my co-worker tells me. But it seems like in order to be wireless effectively, you need lots of wires to back it up. Wireless communication – otherwise known as ‘over the air’ – is the transfer of information or power between two or more points that are not connected by an electrical conductor. Which is all very well, but why then do we have so many wires everywhere?

These things are accentuated in a Corona world. Gone are the days when I could leave the wild flexes in the morning and go to work where the flex arrangements are neater and less irksome. Now, they punctuate my every activity. They make hoovering difficult, they look unpleasant, and they seem to multiply day by day as our co-working activities become more established. Even the dog (in order to have a pee) has to step over another monster flex that comes from the router (enabling internet and wifi) and then passes the back door in an airborne way, wends its way behind the dustbin, in front of the fireplace to an extension lead by a workstation.

I’m also aware that we have various boxes and drawers full of redundant undercover flexes, which we keep because nobody knows what they are for and they might come in useful one day, but as far as I know they never have. Better keep them in case though.

My co-worker who is responsible for technical operations in our workplace/house points out that many of the flexes around our house don’t relate to being ‘wireless’. They are charging phones, or plugging in gaming systems, or are connected to headphones, or are light flexes, or extension cables so that any required electrical activities can happen in the right part of every room. But the irony remains; none of us are wireless in the most obvious sense – we are wired up all over the place.

“What we need,” says the technical operations manager knowledgeably, “is an electrician”, as he wanders off to watch the next episode of The Kingdom on Netflix.

I do hanker for a slightly more flex-free home life. But on reflection, being wire-full (the opposite to wireless) is a sacrifice worth making to keep connected with the world on as many levels as possible in these strange Corona times. Now, where’s my phone charger…?