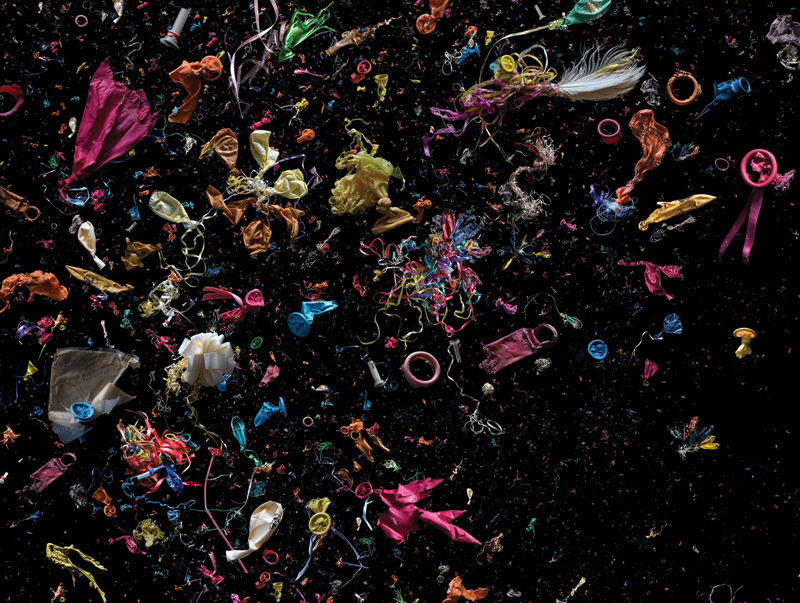 “Disturbingly beautiful photographs,” reads a comment written in the Altered Ocean exhibition guestbook. “Hauntingly beautiful images telling a distressing story,” is another. Although the exhibition only recently opened, the guestbook is filled with comments praising the breath-taking aesthetics and powerful message beneath it.

The gallery is filled with large-scale prints – immersive and thought-provoking. Each photograph shows plastics suspended in space, creating an impression of galaxies comprised of plastics. Each object – ranging from balloons to fishing line, toys, straws and even footballs – has been retrieved from the world’s oceans and individually photographed to create gorgeously detailed images. This is a beautiful show with an important main takeaway to transmit via engaging aesthetics – on how plastics are destroying the environment.

Altered Ocean is the current exhibition, by artist and environmentalist Mandy Barker, at the recently opened Royal Photographic Society gallery within the Paintworks creative quarter. Mandy Barker (b. 1964, UK) is an international award-winning photographer whose work investigates the issue of marine plastic debris. Working with scientists, she aims to raise awareness about plastic pollution in the world’s oceans to highlight current research on the effects on marine life and ultimately ourselves. Her work has been exhibited globally and published in over 40 different countries.

The show highlights how marine plastics are destroying the world’s oceans, and could not be more timely, with David Attenborough’s Our Planet recently launching on Netflix (see also p50) and Sky Arts’ Deep Ocean Live highlighting how our oceans are being destroyed. The Foresight Future of the Sea report, by the UK government chief scientific advisor, projects that plastic in our oceans is due to treble by 2025, and also states that plastic does not decompose; merely breaking into smaller pieces. The full effects of these plastic particles on sea life are not yet known.

Initially the Yorkshire-born photographer Barker began collecting rubbish in the 1980s as an art student; one assignment in which she was briefed to lay out rubbish in the colour of a rainbow really stuck with her. In 2010, prompted by the growing amount of plastic rubbish she was finding on beaches, and learning it could take centuries to degrade, she began to photograph it. “To begin with I tried photographing the objects I found hung on fishing line, and I tried floating them on water, and on white backgrounds, but the black seems to work best because it makes the objects look as if they are in suspension,” she recalls.

In 2012 Barker was awarded the RPS/The Photographic Angle Environmental Awareness Bursary, which enabled her to sail across the North Pacific Ocean as part of a scientific research expedition to photograph recovered plastic from the tsunami debris field.
“For plastic researchers it was an interesting phenomenon because for once they knew how long the objects had been in the ocean; they could measure the rate of deterioration.”

Having spent almost 10 years collecting objects to photograph (and storing these, archived and organised, all over her home) Barker now only visits the beach every few months and always finds plenty of material to work with. “Every time I go collecting I find something that makes me think ‘I don’t believe it’,” she says.

Among the visually arresting prints and displays of objects at Altered Ocean there are also tips on how to reduce plastic usage, so that visitors leave both motivated and empowered to make a change. Ultimately Barker’s work aims to shock people into action over this critical issue, to consider the impact their personal use of plastics causes and to inspire others to lobby for change.

• Altered Ocean is on display until 23 June at The Royal Photographic Society, 337 Paintworks, Bristol (open Thursday – Sunday). Plan your visit and find out more about upcoming events exploring photography and the environment, including a ‘meet the artist’ event with Mandy Barker on 18 May at rps.org/mandybarker

Previous
Craft beer: sisters are brewing it for themselves