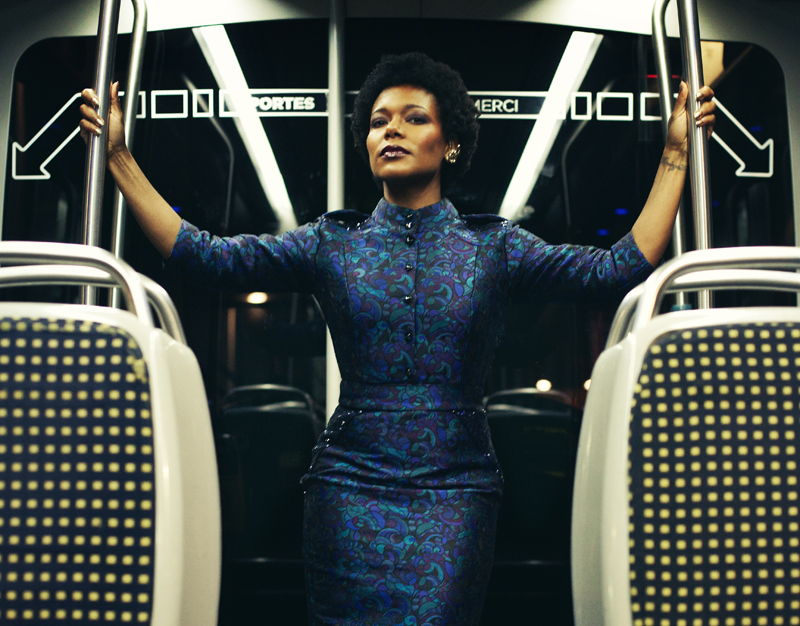 A hand-picked orchestra with a superb local string section performs Billie Holiday’s brooding final album as part of the city’s annual celebration of jazz and blues this month. Up front, and playing her first Bristol gig, a charismatic vocalist putting her own stamp on the sumptuous arrangements

China Moses is keeping to her kindest vocal register when we call her in Paris for a morning chat about her upcoming Bristol International Jazz and Blues Festival appearance. “I’m gonna try and speak real low and real soft; I just have to remind myself not to get too excited,” she laughs slightly hoarsely – trains, planes, automobiles, back-to-back concerts and radio shows will do that to you. It’s almost immediately clear that it’ll be much easier said than done – her infectious energy and enthusiasm begins to crescendo as soon as she begins talking about her Billie Holiday tribute at St George’s.

So, why the focus on Billie’s final album Lady in Satin?

Denny [Ilett, the festival’s artistic director] invited me to do it via my pianist Mike Gorman who is a good friend of ours and I thought it would be fun. I mean, I don’t sound anything like Billie Holiday and I really suck at imitation, so it’ll definitely just be me! But I thought it was an interesting challenge to learn, by heart, that mythical album. What’s funny is that my mom Dee Dee Bridgewater won a Grammy Award for her tribute to Billie and did a one-woman show on her that won an Olivier Award. So I know a lot about Billie’s life from just watching her learn her stuff and I thought it was a nice way for me to do it without trying to be like my mom. There’s always that comparison, which I don’t mind – she is fricking awesome and I’m so proud to be her daughter – but I try to keep the confusion minimal!

…The tunes Billie Holiday participated in artistically are the most poignant; about this conflicting love and vulnerability a woman like that could have at that time…

What can the Bristol audience expect?

The first half is going to be intimate, more like an introduction, with the reasons why we all decided to do this. I think it’s really important to tell the story in music; more so now because our attention is so dispersed between our phones and the information that we get all day. When you go to a concert you need a second to sit down and get into that moment. And sometimes I find that the music alone does not bring you out of your daily world; sometimes you’ve got to talk straight to people and actually ask them; “Hey, how was your day? Everybody okay? Before we get into this, let’s shake it off and relax together, forget about everything.” Because we take in a lot of information and thank goodness there’s art to relieve us.

Which artists do that for you; bring you out of your daily world?

Minnie Ripperton. Chaka Khan. Millie Jackson. I just released a new live track, a Janis Joplin tune, for her birthday because I’m also a Capricorn girl and love Janis. I have two radio shows; Jazz FM Love and also TSF Jazz on a national French station so I spend my time in the world of other artists when I’m doing the programming for those. I don’t often have the time so dive into people’s albums as I want to but I can still fangirl off of one song. One of the coolest albums of the last year for me was Joe Armon-Jones’ Starting Today – Joe has been playing with me for two years so we saw him go through all the demos while we were on the road which was super exciting, and I remember listening to the finalised album and getting hooked on this one song called Almost Went Too Far. Even when he was around I played it on repeat. I’d say, well, you play my music every night. Same thing! His song is in my new-music top five, next to Little Simz who I adore. (“I’m a boss in a dress” – yes!)

Any other exciting new musical discoveries to speak of?

I’ve been back and forth from Paris to London for about a year and a half now so I’ve been thrown into the UK scene. The other day I went to the showcase of this American guy named Jalen N’Gonda who just moved to London; amazing voice, amazing composer, multi-instrumentalist. I get excited about things like that. At the same time I just finished doing some gigs with the legend Pee Wee Ellis and Ian Shaw, one of my favourite vocalists of all time, so I’m surrounded by great artists and music and colourful people.

Yes! The festival has a wonderful line-up; Pee Wee’s playing the next day and I’ve never been to Bristol so I’m going to stay to see that concert. When I went to Ireland to play Cork Jazz Festival I ended up staying to see Maria Schneider. I think it’s important for artists to be able to stay when they have time. You can really catch the vibe of a city. I look forward to Bristol; because I know where it is on the map…but that’s it!

Do you have a favourite Lady in Satin song to perform?

You’ve Changed. And You Don’t Know What Love Is. But my overall favourite Billie tune is Don’t Explain; It’s brilliant. I think the tunes she participated in artistically are the most poignant because most of the time it’s about this conflicting feeling of love and vulnerability that a woman like that could have; what it was to be a woman at that time. You had to be married. There are so many things that we can’t fully imagine; how she navigated all those restrictions. She talked about that complicated, painful love. That line that basically says “I know you cheat but it doesn’t really matter as long as you’re here with me…” If somebody came out today singing that sentiment of “hush now, don’t explain; it’s okay, forget the lipstick on your collar,” that woman would be heckled as anti-feminist. But I think it’s truly, honestly feminist to accept that there are situations that we know very darn well aren’t good for us but somehow we have to get through it. Now there’s this whole “girl, he did you wrong, you must leave him” thing. Often it’s so much more complicated. So songs like that, to me, are very powerful.

…Do I just sing ballads or do I let all the influences of my black American history come out and not give a f***?…

What would you say to those who think jazz isn’t for them?

I’ve only been singing jazz for 10 years; of course I grew up in that world but my music was hip-hop. When I was an MTV presenter, people always told me they didn’t like jazz. And I would say; you know jazz is just the pop music of the Forties, right? That Alicia Keys song you love so much, Fallin’, is based on an old James Brown tune. Of course you love jazz. You may not love five-minute solos, and not everybody does, especially if the soloist isn’t good! I think everybody who says they don’t like jazz needs to go to a festival like Bristol’s, like all the wonderful festivals there are all over the world, and realise how large jazz is and how much it is at the base of all things pop culture, more than people know.

There are definitely parallels with more recently established genres!

Oh yeah, I used to have a bass player who was totally into Nine Inch Nails. Those basslines are no different to Herbie Hancock’s; there are bass gods in metal music that know jazz. The changes in NIN tunes are really complex; they make it sound easy because there’s all this power guitar around it. Also when you hear organic electronica music, R&B, hip hop, it’s a lot of jazzcats doing it. Look at what Robert Glasper did. You hear records and you can tell it’s where they got their inspiration; it may only be a 10-second sample but it’s there.

Alive: I’d love an all-girl power group with Lianne La Havas and Laura Mvula; that would be so awesome. Dead: that’s harder. I would love to have been able to work with great jazz arrangers like Nelson Riddle and Oliver Nelson. I do a lot with symphony orchestras and big bands so I’ve had my music arranged and the more I do it, I realise that they are basically the remixers, the DJs, they put the spin on the tune. So you are only as good as your arranger. Soon we’ll get back to the importance of the arranger. I think it needs to come back to that.

A new album. I did my first in London with British musicians so I’m continuing that, working with a guy named Oli Rockberger who also works with Laura Mvula. We’ve been coming up with some really cool stuff that walks the fine line between what a modern jazz singer is – do I only do ballads and try to sing cool or do I let all of the influences of my black American history just come out and not give a f? And I’m at the point where I’m not giving a f. I’ll be releasing some live recordings I’ve done with the band – Joe Armon-Jones, Ashley Henry, Marijus Alexsa, Neil Charles and Luigi Grasso and they all have their own solo projects. These guys have been by my side for the past two years. We did one session a year ago when I decided to get an apartment in London and I still love the sound that they gave me so I want to share it!