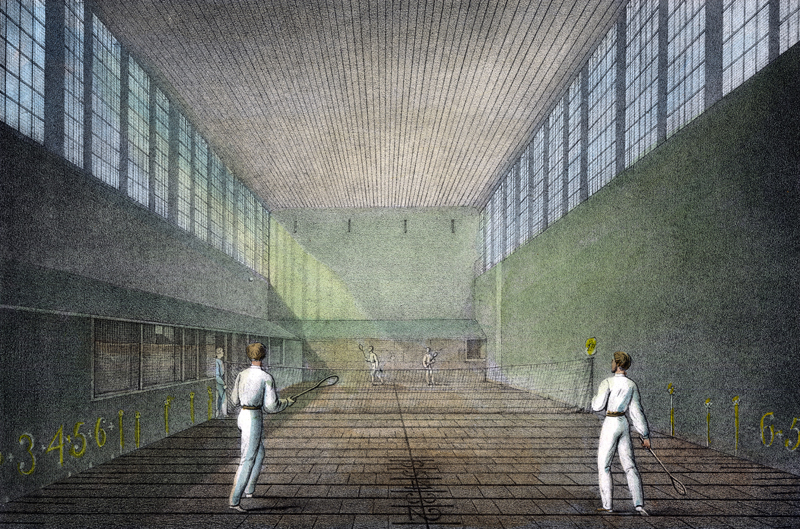 Anyone for real tennis?

Is it time to perfect your ‘poop’? Bristol Real Tennis Club gets us up to speed on the tricky, frustrating, exhilarating, satisfying, age-old sport being played over in Abbots Leigh and making lawn tennis look like a fresh-faced baby

Wimbledon fortnight, a British delight: baize-like grass, sporting gladiators sweating it out, pricey Pimm’s, strawberries, clotted cream, the politest of queues and the annual soon-forgotten thought: wouldn’t it be good to have a game of tennis…

How did our nation, and the world, become so keen on this game? The answer lies just across the Suspension Bridge in Abbots Leigh, where the oldest racquet sport in the world is being played on a daily basis. Yes, Bristol has a ‘real tennis’ court – for playing the original racquet sport from which the modern game is derived – but not many Bristolians know it. In fact there used to be at least 13 courts in the city, mainly attached to inns, just like skittle alleys. Hotwells Road, East Street in Bedminster, Ashton Gate, Limekiln Lane below Brandon Hill, Old Market, Upper Easton – courts, players and drinkers were aplenty.

The court is certainly not as old as others in the UK – some have links back to the 16th century – but the game being played is the same that Henry V, Henry VIII, Cardinal Wolsey and all his ecclesiastical chums, Elizabeth I, Francis I and many medieval drinkers and gamblers would have enjoyed watching and playing. Shakespeare wrote about it, Pepys diarised it: real tennis was common throughout Europe and hugely popular. Paris, before the French Revolution, had 250 courts; indeed one was the location for the signing of the Tennis Court Oath that helped kickstart the revolution. Playing the game is like a physical history lesson.

Despite this popularity, real tennis is really rather peculiar. For starters, the ball, racquet and court are asymmetrical. The balls are still handmade – before Melton started to produce today’s felt-like covering, the material came from monks’ discarded robes. The professional at the court not only has to be a great real tennis player, but rather handy at needlework too – 60 stitches go into making just one ball. Only two companies in the world make the racquets – one in Cambridge and another across the pond.

The court itself is more like a strange stage set than a tennis court and no two in the world are exactly the same. Penthouses (derived from the old awnings over medieval shops and medieval monastery cloisters) line three of the four walls; points are won if you hit a bell and make it ring, if you hit the ‘grille’ or whack the ball in the dedan (viewing gallery).

How about practicing your ‘poop’, ‘giraffe’ and ‘bobble’? These are all types of serve. The saggy net is supposed to be saggy and an attractive basket gathers the balls when needed. We won’t go down the scoring route but you soon get to grips with the very basics – double bounces are allowed and these, in turn, produce chases and hazards which give you a second chance to win the point.

Some compare the game to chess, others to cricket and golf and there are obvious comparisons to squash, racquets and fives as these are all long-distant derivatives of the game. It’s tricky, frustrating, exhilarating, satisfying and fun all at the same time. There aren’t many other racquet sports where men and women can compete against each other; the helpful handicap system makes it possible. Men and women of a certain age can often run rings around the younger generation too; knowledge of where the wonky ball is heading is everything. Interestingly, real tennis also has the longest line of consecutive world champions of any sport in the world; dating from 1740, it makes lawn tennis look like a fresh-faced baby.

The real tennis world is small and friendly and can take you to remarkable places – from Tasmania to New York, Lord’s Cricket Ground to Fontainebleau. Courts are housed in schools, universities, palaces, country houses and sport clubs; there’s even one on an island off Ireland. Clubs welcome members from other real tennis clubs if you’re in their area and fancy a game.

The Bristol real tennis court was built in 1997, thanks to lottery funding and the enthusiasm, vision and dedication of a small group of West Country players. It has a calendar full of fixtures and is open to everyone of all abilities, with the youngest player aged just 12 and the oldest in his mid 80s. The club is also hoping to offer real tennis as an activity for the bronze Duke of Edinburgh Award.

If you’d like to try it out, the club organises regular taster sessions, and the racquets and handmade balls are provided. Go on, get real and give old-school tennis a go! To book a taster session ring the court on 0117 973 3444.