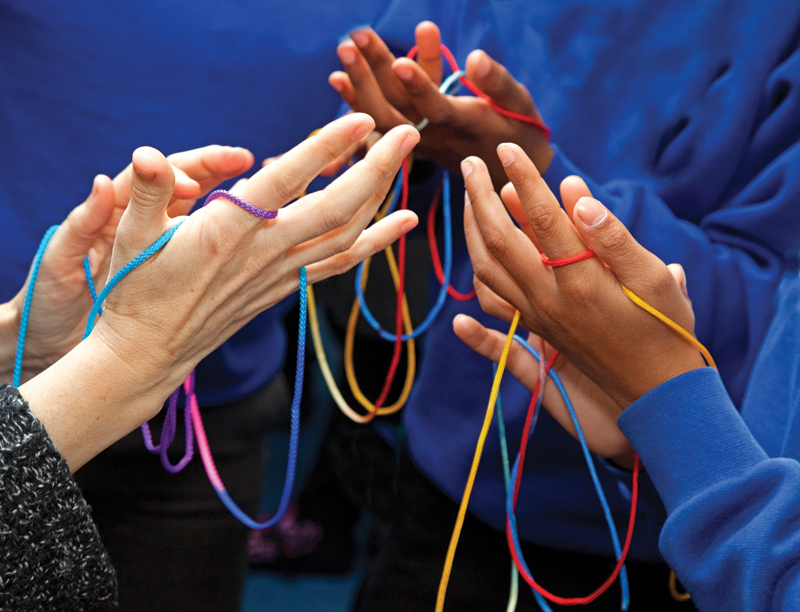 Art at the heart of education

Lizzie Lloyd looks at the valuable creative work Foreground has been doing with Bristol schools lately. Photography by Jamie Woodley

Over the past two years a council-funded arts initiative has been taking place at primary schools across Bristol. The projects include nationally and internationally renowned artists such as 2009 Turner Prize nominee Roger Hiorns, Peter Liversidge, Wood and Harrison and Daphne Wright, both of whom are based in the city. Simon Morrissey, director of Foreground – one of the organisations involved in commissioning the projects – talked to us about the importance of bringing art to primary schools.

Lizzie Lloyd: Can you begin by introducing us briefly to the project?

Simon Morrissey: The idea is to work with leading contemporary artists to make permanent works for schools, working directly with their communities – teachers, pupils and parents.

Foreground is used to commissioning art for unconventional gallery spaces; what appeals to you about working with schools in this case?

Well, the way we describe what we do at Foreground is that we make new art for new audiences and the way we do that is by locating art in the physical and social structures of a community, which is precisely what a school is. There is no more important place to do that than in a school where the impact might have a lasting effect, allowing future generations the opportunity to encounter art in their ordinary lives and everyday environments.

What really interests me is the timing of this programme; I’m thinking of the much-reported squeeze on creative subjects in the national curriculum at a primary and secondary state school level

Absolutely, and as it happens, although the schools programme takes place across the city, lots of the schools are located in poorer areas of the city where visual arts are less accessible. In fact, lots of the children in these neighbourhoods have never been to an art gallery.

Can you give us an idea of the physical outcomes of the projects?

How do you define ‘permanent’ artworks?

In a very broad sense. We don’t commission the kind of public art you find in city centres across the country. We’re not interested in creating something monolithic. It’s more about how a community like a school can own a piece of art that is meaningful for them in the long term for the whole community of the school. 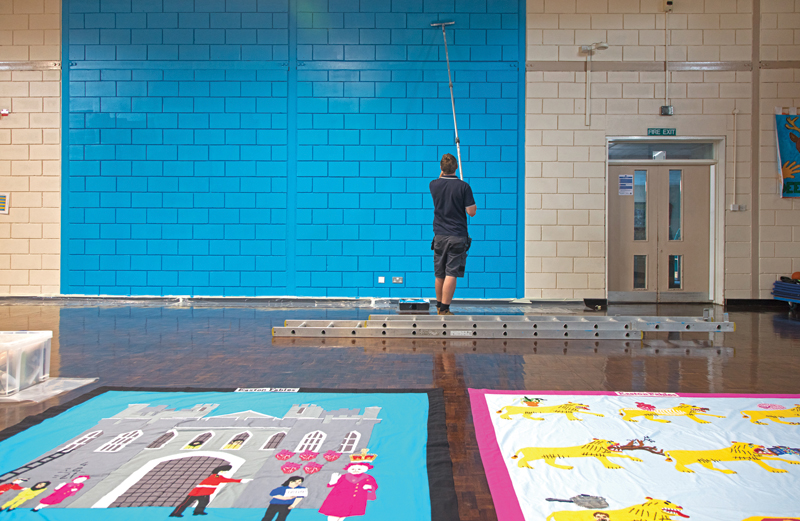 Is it difficult to anticipate what might constitute ‘meaningful’?

Yes, so one of the things that we like to do is make sure that our commissions are active rather than passive. We’re always very keen not to take a one-size-fits-all approach but instead to marry up artists that we commission with the particular priorities of each school. In most cases this is driven by its teaching or social philosophy. At Kingfisher School in St Anne’s Wood, which is a really economically deprived part of the city, the school wanted to make a demonstrable statement about art’s importance within their community. So we’re commissioning Richard Woods to make a big intervention within the structure of what is a new, multi-million pound, school building. He’s doing a decorative tiled facade at the front entrance of the building so everyone will see this as they take their children to school; day in, day out.

How have your other commissions developed?

We began by visiting each school. Through these visits we got a feel for the physical context which will give us some sense of the form that a potential project might take. But we also speak with the senior management team and specific teachers to get a sense of how each school sees itself and its specific interests, needs and priorities. Through those discussions we get an idea very quickly about which artist it would be good to work with.

How much did these discussions vary from school to school?

Interestingly, given that the nine primary schools are coming out of the same city, they had very different atmospheres and approaches, each dealing with particular social and financial pressures.

Can you give us an example?

We’re also working with Easton Academy which is something like 90% black or minority ethnic and 85% muslim but within a Church of England managed school. Many of these children are first-generation immigrants who have come from conflict zone areas and speak English as a second language. So there’s really specific texture to the children’s experience.

You mentioned that sometimes the project develops as a result of the particular interests of the school too?

Yes, Bishop Road School is very committed to how stories open up experiences for children; it’s key to the school’s pedagogical approach. They have a brilliant library and employ a school librarian, which is very unusual for a primary school – every subject is taught through stories. We needed to find an artist equally interested in what stories can do which is why we suggested they work with Heather and Ivan Morrison who build really rich worlds in their work around the idea of narrative.

After you have seen the school, what happens next?

Again, it varies. At Bishop Road, Heather wanted to meet and talk to every single class. It was directly through these conversations that Heather and Ivan developed their idea.

So what was the physical outcome in this instance?

The school is an old Victorian building with an empty bell tower which Heather and Ivan decided to make a new bell for. There are lots of interesting things at play with this project. The bell is a sculpture – a physical and quite traditional object too. It’s functional – rung twice a day (you can hear it for about a mile around the school). And, though you can see it from the playground it’s not physically accessible to the children but it’s got all sorts of stories for the children embedded in it.

What do you mean by ‘embedded in it’?

Heather and Ivan are really good at spinning ideas and stories around the objects they make. The conversations around the bell are as important as the making of it. Heather’s talking to the classes in the school was a way to fold the children into the work’s narrative.

The bell itself was cast in Loughborough by the last remaining bell foundry in the UK so we did a trip to the foundry with about 30 children from the school council and watched the bell get cast. This was an amazing experience which the children relayed to their classmates through an assembly to the rest of the school. 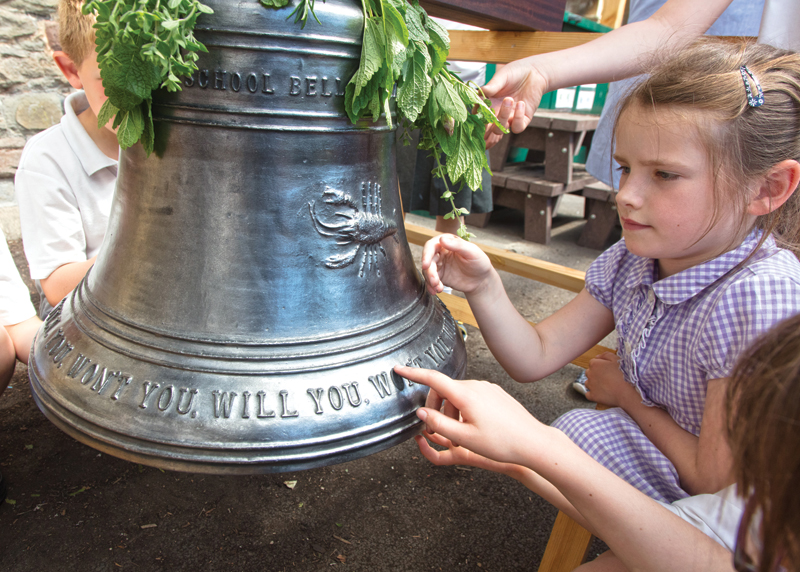 When the bell was finally brought to the school, Heather led two ‘welcoming ceremony’ assemblies. She told the children about a French folklore which says if a bell is right for a place it will grow wings and fly to it. She followed this with what she called a ‘bell dressing ceremony’ taken from an old English tradition, bringing herbs and wild flowers, and the children processed round the bell, laying flowers and garlands. Heather told them they had to call to the bell, and if it speaks it means that it’s the right bell for the place. So then we had 300 children calling out ‘Will you won’t you, will you won’t you?!’ until Heather gave the bell a big whack with a lump hammer. The resounding of the bell at this moment left the children speechless – it was magical! So what I mean is this is all part of the work. Through the story of the bell’s making and arrival the children gain this incredible attachment to it.

How does this compare with, say, Olivia Plender’s project in Easton?

Olivia wanted to work directly with a small group of children in a workshop situation to create an idea together. Coincidentally this project ended up being about stories too. Olivia wanted to find a structure on which the children could project their own stories so we did a workshop with string games; cat’s cradle and the like. Almost every culture has a version of string games because these games spread throughout the world, partly passed on by sailors learning them on their voyages and taking them to new places, creating variations of the games. So there was a neutral universality to this structure that felt really apt…

Especially as English wasn’t the first language of lots of the children?

Exactly. But what was really interesting is that this project took on its own momentum and direction. We thought that it was going to be a book, like an instruction manual, full of string games that the children had invented themselves. In fact most of them weren’t really games at all but more abstract…

Sometimes with four hands just sticking out of them! But the children started to give them these amazing names like ‘The Hexi Monster’ and ‘The Rainbow Knot’. Olivia started to realise that the project wasn’t really about these string games or objects per se but a springboard for something else. So the children came up with six or eight ‘games’ but through follow-up workshops they began to make up stories around them which we later compiled and turned into an illustrated book as well as two large appliqué banners that are hung in the school’s main hall.

Well sometimes really surreal and dark, like fables or fairy tales. There was one – I’m paraphrasing here – about a cup and how you could fit the whole world in the cup and when you did the world felt safe. That was it, just a few lines but they were incredibly moving; about how to make a world that feels incredibly vulnerable, safe.

You’ve talked a lot about the ongoing impact of these projects to the schools; what steps have you taken to ensure the projects’ legacies?

I think the important thing here is the emphasis that we put on embedding the projects within the lives of the children and schools. Daphne Wright, for example, was determined that her work for Cabot Primary would be useful to the school on an everyday basis. She is making what she calls ‘speaking sticks’. These brightly coloured ‘sticks’ are cast in a high-density rubber material – they’re very tactile – and sets of them are kept in each classroom. They look like microphones, wooden spoons or Barbara Hepworth sculptures. Daphne was particularly interested in the structures in place in schools, to get the children participating in lessons. The ‘speaking sticks’ are intended to legitimise and focus on the activity of speaking and listening. This is what I mean about a work becoming part of the everyday; if it’s used in the daily activities of the school and is core to the behaviour and pedagogical ethic of the school this artwork will be used for years to come.

So what’s next for the schools programme?

This series of commissions is drawing to a close in the autumn but the project has received a lot of interest across Europe and the UK for its uniqueness as the largest coherent commission of contemporary art for primary schools in Britain. We’d love to continue our work at other schools across the city and also in other areas of the South West, but this is all very dependent on funding. In a couple of years’ time there is going to be a programme of secondary school renewal in Bristol with major new schools being built. If the council still has the same commitment to culture and contemporary art then there is the potential for another series of schools projects to unfold, focused on older children and that would be a really exciting challenge we’d love to be involved in.