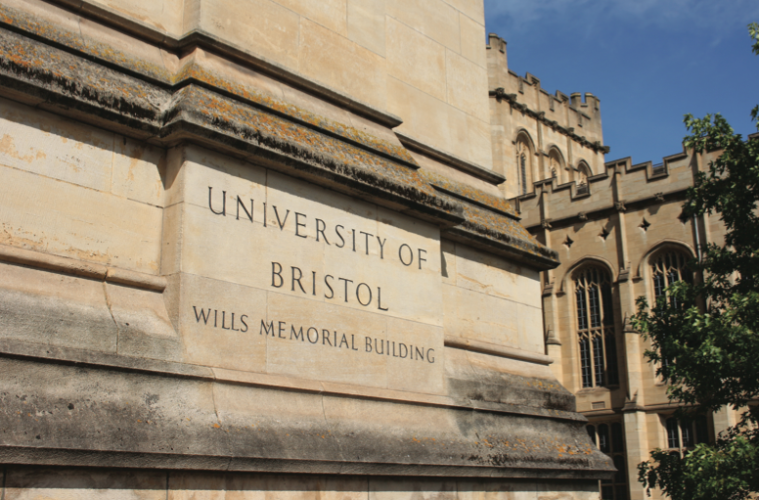 Why the University of Bristol is the
place to be

As term time begins again, thousands of University of Bristol undergraduates will leave the nest for their new home away from home. With Bristol alive again with academia, Malcolm Croft reveals the reasons why the UoB is the place to be in 2020

Bristol is home to two world-class universities, so it’s never short on students. University of Bristol and University (UoB) of West England (UWE) have had an affectionate rivalry ever since the latter set up campus in 1992, a century later than the former’s 1876 founding. Considered the ‘posh’ alternative to the largely Frenchay-based UWE’s ‘edgier’ vibe, with both sides gently teasing either each other for those same reasons, Bristol has long been a favourite among private school students, with its main campus and halls of residences around affluent Redland, Cotham, Whiteladies Road and Clifton – currently undergoing major construction with the aim to pedestrianise the area and create more of a community vibe.

Campus of the future

Construction of University of Bristol’s brand new Temple Quarter Enterprise Campus is underway on the east side of Bristol Temple Meads station – in the disused Post Office site that has been begging for development for 20 years. The construction has been deemed one of “Europe’s biggest regeneration programmes,” helping transform one of the city’s “most neglected areas into a vibrant new quarter,” (so says the website). This campus will be the envy of every UK university with tech innovations driving its purpose and students tackling the challenges of tomorrow such as driverless cars and ‘the future of work’. The campus, near Barton Hill, will house 3,000 students, and is intent on opening up the infamously “symbolically posh” (so says The Guardian) university to local people on “the wrong side of the tracks” where only 8.6 per cent of school leavers go on to higher education, unlike Clifton, where 100 per cent of school leavers go on to university.

The Guardian’s long-revered university guide has ranked UoB as the 23rd best university in the UK, out of 130. The university featured in the top 10 for 12 subjects (with six in the top five) and second overall for two subjects – engineering design, and film and television. The newspaper ranks universities on the quality of teaching, student satisfaction and employability; the three main issues important to students when choosing where to study. Also, as revealed by international league table QS World University Rankings 2020, UoB is, from 2019, the 49th best university in the world. Each year, 90,000 academics and 45,000 employers assess the world’s top 1,000 universities across 85 countries, and QS also positioned Bristol as the ninth best university in the UK; 11th overall in Europe. “Bristol is renowned for its academic excellence and we are delighted to be ranked within the world’s top 50 universities,” said Hugh Brady, vice-chancellor and president of the University of Bristol. “I was particularly pleased to see how highly regarded we are by top employers, which is testament to our exceptional students.”

The Graduate Market Review 2019 – a major new study of graduate vacancies, starting salaries and undergraduate work experience programmes at the country’s top 100 employers – revealed that UoB students are the second most targeted by Britain’s top 100 employers, including PwC, HSBC, Unilever, the BBC and the NHS. University of Manchester took the top spot. The review also highlighted that the median starting salary for UoB graduates joining the nation’s leading employers in 2019 is £30,000.

Students of the UoB are among the highest paid in the country within three years after graduating, according to the Longitudinal Education Outcomes (LEO) report released by the Department of Education this year. This data reveals that UoB graduates in subjects across engineering, science, arts and social sciences are among the top 10 highest earning graduates in the UK. “The LEO data is significant because it reveals, for the first time, information about graduate earnings and employment based on HMRC administrative data, rather than self-reported surveys,” said Hugh Brady, before concluding: “University is, of course, about more than securing a high graduate salary and at Bristol we pride ourselves on our proven track record of producing well-rounded and independent students who are equipped to succeed in a dynamic world.”

Best place to live for graduates and under 26s

Bristol has been regularly voted, ranked and honoured as ‘the best’ in a diverse multitude of awards. The city has been named by various sources as the happiest city in Britain, one of the best European cities to visit, the kindest city in the UK, vegan capital of the world, the UK’s most environmentally friendly city, the fourth most inspiring city in the world (ahead of all other UK cities) and the best place to live in Britain – all within the past three years. More importantly for students, however, this year Bristol was voted the best place to live in the UK (outside of London) for people under the age of 26, according to a BBC Newsbeat survey, which included rent, transportation, mental health, music events, sports facilities and 4G strength among its determining factors. In 2019 Bristol was also named the fourth best city in the UK for graduates, based on monthly rent, year-on-year wage growth (4.1 per cent!) and employment rates, beating Manchester, Leeds and Birmingham to the punch. Proof, were it needed, that smaller cities such as Bristol are starting to provide better opportunities for younger people than larger cities. The average monthly wage for graduates in Bristol is currently £2,189.

The academic reputation is second to none. But for the 15,000 students who like to sweat outside of the exam room they are rewarded with more than 60 university-led sports clubs. There are also more than 330 societies for students looking to expand their learning – from the strange (Brizzlepuffs Quidditch Club, the Bristol University Zombie Apocalypse Network) to the straight (Philosophy Society, Real World Economics Society) there is something for everyone.

An equal split of male and female highlights a well-rounded course structure; apt as Bristol was the first HE institution in England to enrol women on an equal basis to men

Gone are the days of gender inequality at UK universities. In 2019, University of Bristol has a fair ratio of girls to boys and an approximate 55:45 split. The gender make-up of each university is influenced by the type of subjects on offer, so an equal split of male and female highlights that the university has a well-rounded academic course structure. This is apt considering the university, founded in 1876, was the first higher education institution in England to enrol women on an equal basis to men.

A university for everyone

University of Bristol remains a leading voice for the LGBTQ+ community. They established the Trans Students Network, which secured huge wins for trans students such as gender-neutral toilets – one of the first in the UK – and inclusive health service registration.

Best student union in the UK

Located on Queen’s Road, UoB’s SU at the Richmond Building is the largest purpose-built student union in the country. And, as the union’s ‘wall of accomplishment’ currently tells us, it is also the ‘fastest improving’ union in the land too, with a 14 per cent increase in student satisfaction from 2018 – the biggest for any university SU in the country. The results come hot on the heels of the SU’s revamped bar, new student aid strategies, and refurbishing of its image with the opening of the fair trade, sustainable and healthy Source cafés campus-wide. Legend also tells us that the floor area of the Richmond Building is equivalent to four full-size football pitches!

Parents, put your mind at rest. The UoB is one of only two universities in the UK that runs its own full NHS doctors’ surgery dedicated just to students. This means that all new undergraduates enrolled are automatically registered at the university’s GP practice.

Last year, UoB championed the Fossil Free Bristol campaign with the aim of fully divesting all of its £2million investments in fossil fuel companies by 2020 – the first of the prestigious Russell Group of universities (to which UoB belongs) to do so. The future starts here.

The university has more than 200 degree courses covering a broad range of subjects. In 2019, QS World University Rankings revealed that 27 of the courses taught at UoB – including English, philosophy, anatomy, physiology, education, social policy and geography – are rated within the world’s top 100. Nine of its subjects were ranked in the top 50 with two placed inside the top 20, putting UoB on a par with world-leading universities such as Princeton, Stanford, UCLA, Oxford and Cambridge. The best performing courses were Earth sciences (ranked 15th best in the world, and third in the UK) and veterinary science, ranked 19th in the world.

In 2015 University of Bristol was voted the best in Britain for best city life, as revealed in the Whatuni Student Choice Awards survey conducted with 40,000 university students across the country. Another trophy to add to the gleaming cabinet! The legendary UoB institution (and sadly now shut) kebab van ‘Jason Donervan’ may have been responsible for most of the votes that year. In 2019, the UoB had again been nominated but came third behind Northumbria and Edinburgh. All eyes are on 2020…

It isn’t just pioneering tech and coming first that makes UoB stand out from the pack. One of the institution’s most celebrated quirky facts is that, in 1998, its scientists discovered the perfect technique for dunking biscuits in tea. (They didn’t say which brand of tea, or biscuit.) They concluded that the perfect dunk is a smooth submersion at an angle, followed by a slow twisting of the biscuit 180 degrees, so that the dry side bears the load of the soaked side. Do try this at home.

The University of Bristol is famed for its celebrity alumni including Simon Pegg, Derren Brown, Matt Lucas, David Walliams, Emily Watson and James Blunt. More importantly, however, there are 12 Nobel Prize laureates who used UoB as their foundation stone to greater success, including Winston Churchill and Dorothy Hodgkin, the first – and, still, only – woman to win the Nobel Prize for science.

Often called the ‘Indecision Steps’, for the awkward and unnatural one-and-a-half steps per step, the Cantock Steps, near the Queen’s Building and Principal’s House, are one of the UoB’s more curious creations. Sadly, there’s no shortcut to the top of hill, leading to much frustration for those students running late to lectures.

In the past half-century a staggering amount of world-changing inventions have been pioneered at UoB. From the NHS’s famous five-a-day healthy eating campaign to non-stick chewing gum, the first Wi-Fi brainwave to the first mobile phone, Ribena to Olympic-standard bicycles, when it comes to bringing the best out of its students, UoB’s proof is in the pudding.

University of Bristol is one of 24 universities selected by the Russell Group, a prestigious research-intensive organisation committed to providing an “important part in the intellectual life of the UK,” as well as offering outstanding teaching and learning experience with unrivalled links to business and the public sector. The group guides its universities by suppling strategy, policy development, intelligence, communications and advocacy. The UoB is in very good company, with Cambridge, Oxford, Edinburgh, Leeds, Kings College and Manchester also part of the team.

For all those who have wandered the hallowed halls and Clifton campuses, it’s obvious that UoB is an enviable place to elevate your higher education. Earlier this year, Times Higher Education voted the university the ninth most beautiful in the UK thanks to its stunning fusion of Gothic and heritage architecture, large open garden and park spaces, and buildings designed by noted visionaries Charles Dyer and George Oatley. But, as the only university in the world that can boast Isambard Kingdom Brunel’s famous suspension bridge as a backdrop, it’s little wonder the university, and its graduates, are inspired to achieve greatness.