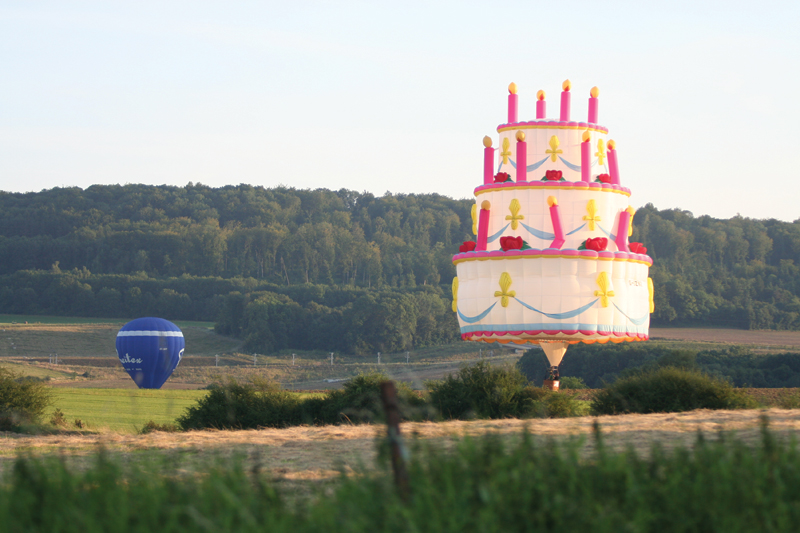 When people think of this neck of the woods, they think of hot air balloons. Fact. Having been a silky part of the city fabric for decades, Bristol International Balloon Fiesta celebrates the big 4-0 this month – but how clued up are you on the eventful history of this staple summer event?

Yep, Europe’s largest annual meeting of hot air balloons is having a gert big birthday party this year, and we’re all invited. Here are a few things you mightn’t have known about the famous event…

1. The idea of the Fiesta first came about over a beer in a pub between members of the Junior Chamber of Commerce, including Don Cameron.
2. The very first one took place from 7 – 9 September 1979.
3. Fiesta founder Don Cameron once delivered post to Malta, taking off in his balloon from the deck of an aircraft carrier.
4. Don was also the first person to cross the Sahara and the Alps by hot air balloon.
5. All balloonists carry landing gifts in their baskets to offer to landowners when they touch down.
6. Although regularly shortened, the Fiesta’s full title is Bristol International Balloon Fiesta. 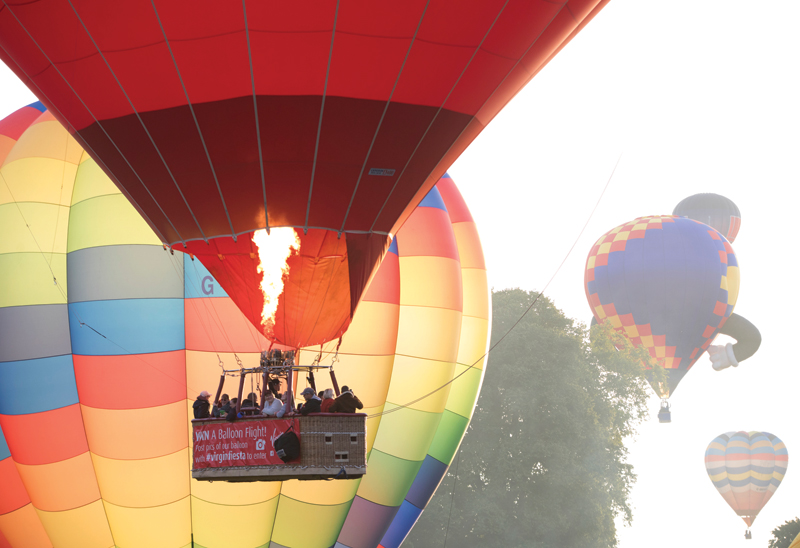 7. In 1979, on the Tuesday before the Fiesta, a pre-event flight took place from College Green to build anticipation for the coming weekend – this is a tradition that continues today.
8. The founding principle of the Fiesta was that it was free for the people of Bristol and remains so even now.
9. The inaugural Fiesta saw just 27 balloons in attendance, making more than 100 flights over the city.
10. By 1980 the Fiesta had grown significantly, with more balloons and more than 50,000 people visiting.
11. 1982 saw the number of balloons participating increase once more; at one point, 42 balloons flew in a mass ascent. This was the largest number of balloons ever seen over Bristol.
12. In 1985, due to the growth of the event, a barrier was installed around the launch field for safety.
13. In 1987, pilots from nine overseas countries took part. A total of 256 balloon flights were made on the Saturday, 129 within 65 minutes during the morning launch, setting a new world record.
14. In 1989, HRH Prince Edward visited the Fiesta. Unfortunately, poor weather made for a tethered event.
15. The first night glow was held on Durdham Downs the weekend before the Fiesta in 1990. A big hit with the crowds, it wasn’t until seven years later that it was incorporated into the main event.
16. The ‘special shapes’ launch was introduced as the first flight of the Fiesta in 1997, showcasing the skill of the balloon designers who had made flying vessels in the form of floating cars, food and drink and even toilet rolls. Floating over the city, they signal that the Fiesta has begun. Try and spot the new birthday cake this year! 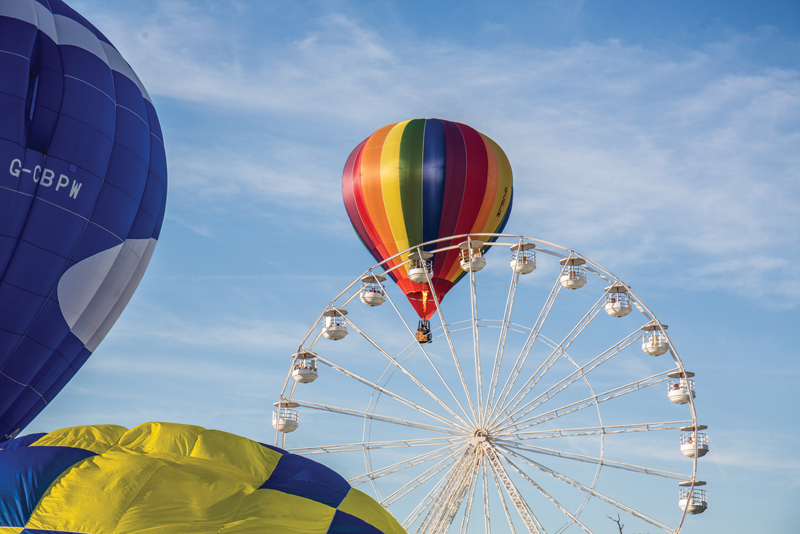 17. In 1998, Thomas the Tank Engine joined the growing number of special shapes for which the Fiesta was becoming famous.
18. The next year, the Breitling Orbiter 3, a Rozière balloon built by Cameron Balloons, made the first non-stop flight around the globe.
19. Also in 1999, a vintage balloon tether featured eight balloons from the original Fiesta, including the first-ever balloon built by Cameron Balloons, the Bristol Belle.
20. Fast-forward to 2017 and the Bristol Belle made a grand return to the Fiesta to make visitors smile once more.
21. New European ballooning records were set at the Millennium Fiesta which attracted more people than ever before. On a single day, 150,000 people attended on the Saturday, bringing the total attendance to almost half a million.
22. The same year, 132 balloons launched in 55 minutes, breaking the 1987 record. The European density record was also broken, with 117 balloons taking to the skies in just 30 minutes.
23. A second night glow was introduced on the Saturday night in 2002 and attracted crowds of 100,000. The Fiesta staged the final flight of the famous BBC world balloon, star of the TV idents.
24. The Bristol Balloon Fiesta broke the record for the largest number of balloons alighting in a single field in 2014. 90 balloons landed at the site of the old Cadbury Factory in Keynsham.
25. In August 2015 Fedor Konyukhov broke the record for a non-stop global balloon flight in a Roziere 550 built by Cameron Balloons. 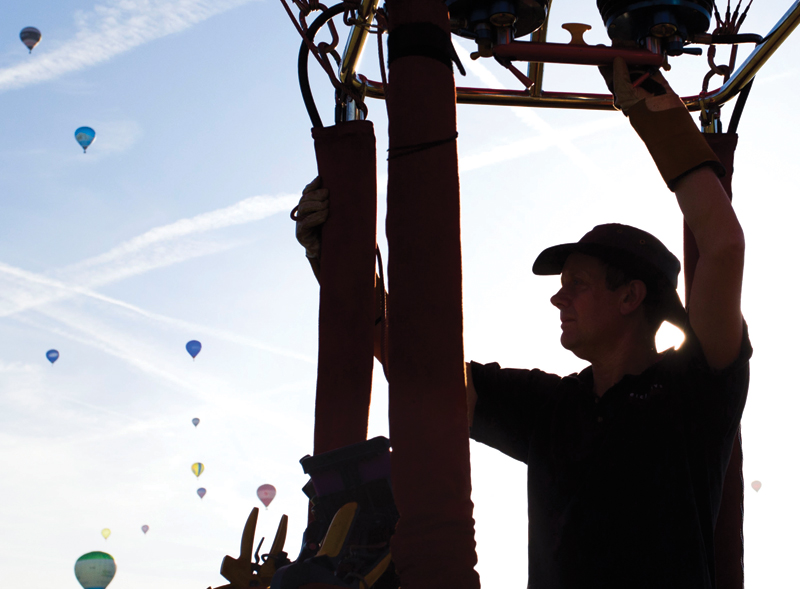 26. In the history of aviation, only three balloons have ever completed this round-the-world flight, all three were built by in Bristol by Cameron Balloons.
27. To celebrate Bristol’s status as the European Green Capital, the 2015 Fiesta saw the maiden flight of a unique creation, the hybrid solar-powered hot air balloon.
28. The Fiesta is twinned with ballooning events in Switzerland, France and Belgium.
29. It takes a full year to plan the Fiesta; planning literally starts the day after the event closes.
30. The Fiesta costs more than £750,000 to stage each year.
31. The event is organised by a committee of 12 volunteers, supported a team of two full-time staff.
32. It takes a team of 800 volunteers to make the Fiesta happen, that’s a massive 32,000 hours of volunteer time given freely.
33. The Fiesta has hosted plenty of famous faces, from the Tellytubbies to Richard Branson and Michael Eavis.
34. Members of the event team function on an average of 16 hours of sleep over the four days.
35. In 2016 Melissa Joan Hart (aka Sabrina the Teenage Witch) attended the Balloon Fiesta during a break from filming.
36. On average, 580 flights happen during the Fiesta.
37. 52,000 rolls of toilet paper are used over the course of the Fiesta.
38. A total of 4,500 bacon rolls are served to balloonists and visitors during the Fiesta.
39. 30,000 pints of Thatcher’s cider are pulled during the event.
40. Every £1 spent putting on the Fiesta generates a further £20 being spent in the local economy, equating to a whopping £15m net economic benefit to the city!
• bristolballoonfiesta.co.uk

Previous
Bar 44: From Catalonia to Clifton