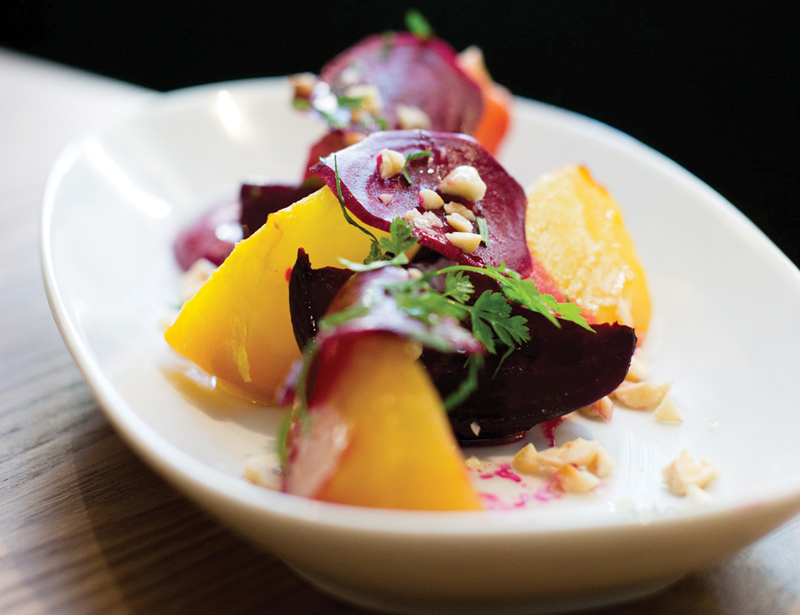 Bar 44: From Catalonia to Clifton

All the authentic Iberian background behind the Village’s latest opening, Bar 44. Words by Velimir Ilic

For food, Spain is one of the best countries in the world at every level, from local, mama-style cooking to that casual, modern tapas bar style, and right at the top, the gastronomic end.” So says Owen Morgan, co-founder (with brother Tom and sister Natalie) of Cardiff and Vale of Glamorgan-based tapas restaurant group, Bar 44.

An ardent Hispanophile, he should know what he’s talking about. Never happier than when extolling the virtues of his favourite country, and fuelled by an unbridled passion for Spain’s colourful food, drink and culture, he and his siblings have poured heart and soul into the project, combining artisan ingredients from the finest independent suppliers and producers, both Spanish and local.

The restaurants have been a real game-changer for the food scene in South Wales. Cowbridge, a small, traditional market town seven miles or so west of Cardiff – where the Morgans grew up – might seem like an inconspicuous place from which to start a Spanish tapas business, but since opening their inaugural venue there in 2002, the trio have carved out quite a reputation for their modern, authentic and imaginative take on time-honoured Iberian dishes, winning a heap of awards and plaudits in the process.

Recently, there was yet another award to put on the shelf, with Owen voted renowned drinks industry website Imbibe’s Restaurant Personality Of The Year in recognition of his standing among his peers, and of Bar 44’s remarkable ascendency.

The journey, and the brothers’ love affair with Spain, started early. “It comes from growing up in a food-crazy family, and eating together on a regular basis,” says Owen. “On family holidays, we would often go to different parts of Spain – the ‘non-package’ areas – which fuelled our passion hugely. Then when I was older, summer jobs in Spanish bars and restaurants just kept feeding the bug.” 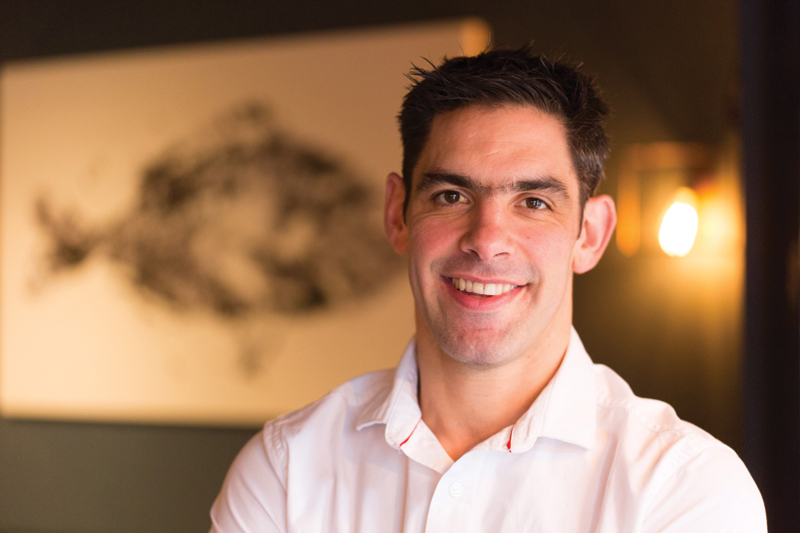 Owen’s something of an authority on trendy tipple sherry

They’ve been wholly committed to the cause, mucking in and doing whatever it took to succeed. Owen clearly remembers their inauspicious beginnings in Cowbridge, and getting the keys to their first site. “The restaurant was in a derelict social club on the High Street, and a tapas bar seemed completely alien to people,” he recalls. “It was on the first floor, with no real shop front or presence. Everyone thought we were crazy. Three times, in that first month, the chef didn’t turn up, so we were in the kitchen ourselves, doing all the cleaning and the toilets, washing the pots, doing the bar, cashing up at the end of the night, and starting again the next morning. That’s how we cut our teeth – you just grow by your mistakes.”

And grown they have; what seemed like a huge risk back then has paid off handsomely. Having also opened their Penarth outpost and flagship Cardiff restaurant in recent years – plus their northern venue, Asador 44, grilling meat, fish and veg over charcoal and woods – they’ve proved those early doubters wrong.

With their latest branch in Clifton Village opened in July, showcasing their take on Spanish food to a new clientele, another chapter beckons.

Having spent their formative years in Bristol, studying at Clifton College, Owen and Tom are clearly still in love with the place; there’s a definite sense of unfinished business. “It’s just a great city, full stop,” says Owen. “We’ve always wanted to open in Bristol, because we have a personal connection from living here in the past – we very much see it as our second home. Clifton Village, in particular, is a big draw for us because it’s such a beautiful part of the city.”

It helps, of course, that they’re already immersed in Bristol’s vibrant independent food scene, with well-ensconced fellow Spanish eateries such as Paco, Poco, Muiño, Pata Negra and others.

“We have a lot of friends here,” says Owen. “We know a lot of restaurateurs, chefs and suppliers, and always love coming to eat and drink. There are so many interesting areas and neighbourhoods, which have allowed a lot of start-ups to set up bricks-and-mortar restaurants. Bristol’s always been a creative city, whether that’s arts, culture or music, and the food scene is an extension of that. Cardiff’s food scene is great, but it’s much further ahead in Bristol, and we really want to be part of that mix – it seemed like a logical next step to come over the Severn Bridge.”

There’s a palpable excitement about the space they’ve inherited on Regent Street. But their ambition, says Owen, is not driven by taking shortcuts. Despite Bristol being their fifth restaurant, don’t expect a chain mentality or formulaic roll-out. “Rather than simplify and compromise, we’re very conscious of not standardising,” Owen insists. “If anything, we’ll be pushing harder to be even better in quality and process.”

As with the other Bar 44 venues, Bristol has its own unique character and theme. Having undergone a redesign, it has a striking feature wall by Stokes Croft-based Spanish artist Andy Rivas – think urban street art meets rural Spain. There’s also a new bar and, for special occasions, two private dining rooms downstairs in the old bank vaults, one of which will be entirely based around sherry… 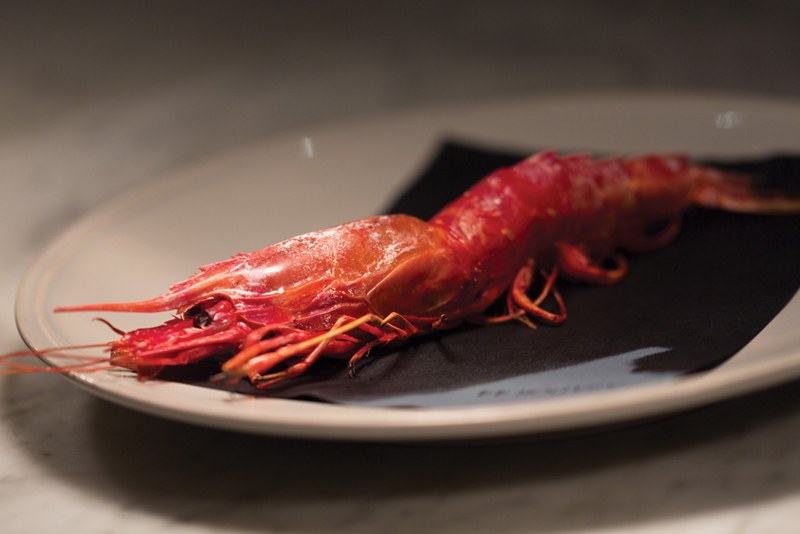 The Bristol menu is eclectic, inspired by Owen and Tom’s regular research trips across Spain and featuring both small-plate grazing and larger sharing plates (‘raciones’). Expect Galician beef, chorizo and different types and grades of jamón (there are even plans for a special ‘jamón room’) plus unique shellfish and Sanlúcar king prawns, prized cuts of Ibérico pork (served rare, like a steak) and other such epicurean goodies. “Our modern take on the Spanish classics,” says Owen, “that a cosmopolitan Spaniard, walking in, would appreciate. We’d like to think that our offering could sit comfortably in Madrid or Barcelona.”

Vegetarians and vegans are well catered for, with dishes based on Spanish staples such as broad beans and different tomato varieties, plus vegan wines, sherries and even the odd vegan dessert. “At Asador 44, we do a blackberry ripple vegan ice cream made with avocado, which you need to make it creamy,” says Owen. “It comes with a chocolate gazpacho, and we do a blood orange salad with it.”

Presentation, meanwhile, is typically simple. “The further we go, the more things get pared back to the ingredients on the plate,” he adds. “Two or three elements, maximum – no fuss. If you’re doing an asparagus dish, that ingredient should be the star, with one or two accents.”

As with the Bar 44 restaurants in Wales, head chef Tom Maynard – who has worked with Stephen Terry at The Hardwick in Abergavenny, and at Scott’s and J Sheekey in London – will create new dishes every week. “Tom is exceptional, really strong on fish and seafood,” says Owen. “He has a really light touch and creates great flavours. Our relationship is great – he understands us, and how we work.”

That understanding takes in an array of food influences that chime with them both; a roll-call of Spain’s cutting-edge chefs, restaurateurs and gastronomic innovators trip off Owen’s tongue, including Ferran Adrià (El Bulli), whose influence has rippled down through all levels of cooking; the Roca brothers; Andoni Luis Aduriz at Mugaritz; Juan Mari Arzak in the Basque Country; and down south, Ángel León’s three-Michelin-starred Aponiente, to name a few.

The more Owen speaks, the more you realise how well-connected he is. He cites “amazing Spanish chefs in London that we get on really well with” such as José Pizarro, Nieves Barragan [ex-Barrafina chef, who recently opened her Sabor restaurant in Mayfair] and Angel Zapata Martin at Barrafina itself. “We’re sending some people up to him in a couple of weeks,” he says. “The scene is really inclusive – they’re not too protective about Spanish gastronomy, and just want to spread the word. They’re a great inspiration.”

The Morgans promise family-friendly event days in Bristol, such as the big fiesta they had in Penarth for International Sherry Week last year, or a calçotada, a Catalan-style barbecue during which piles of giant green onions (calçots) are grilled over a hot fire. “They’re just so much fun,” laughs Owen. “It’s all about getting your hands dirty, making a great romesco sauce to go with the onions, and washing it all down with a glass of good Catalan wine.” 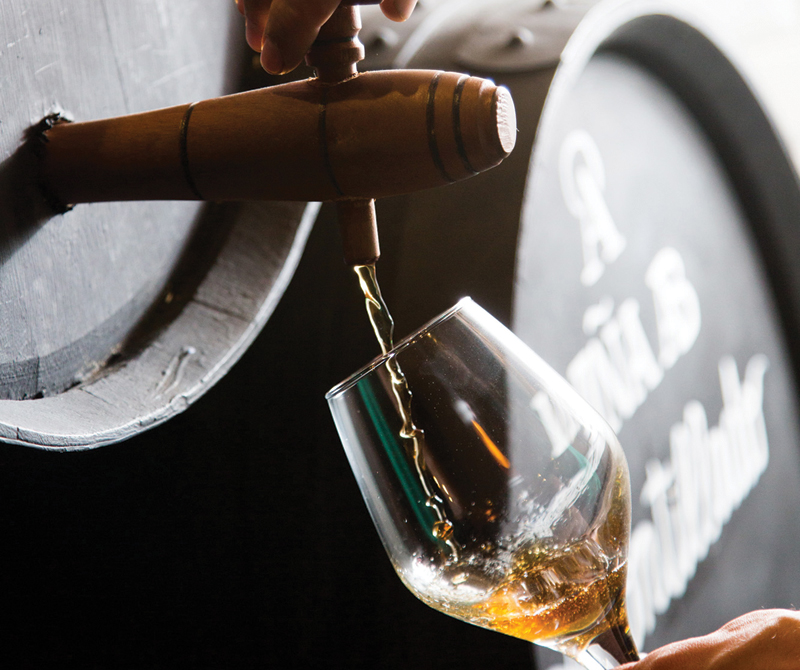 Expect extensive sherry options – the most food-friendly wine there is, according to Owen

Talking of wine, as one of only a handful of certified sherry educators in the UK, Owen is also a leading authority on this most versatile of tipples, having trained in Jerez, southern Spain. Forget about the much-maligned stuff your nan used to drink at Christmas – sherry has evolved into an altogether more alluring drink. Along with good jamón, says Owen, it’s an ingrained part of Spanish life – “‘last meal’ food and drink,” as he calls it.

“People have learnt to trust us about sherry – through our tasting menus, for example, with six or seven plates and sherry samples,” he says. “We cook a lot with it and also serve sherry cocktails, which are huge around the world now – we’ve been doing them since we first opened. You can have sherry in a mojito, different types of Martinis, or in an Old-Fashioned. I’ll eat my hat if can’t find a sherry to suit everyone, whether it’s sweet and sticky, or super-light and dry, and the best food to go with it – it’s just the most food-friendly wine in the world.”

So, while Bar 44 Cardiff is the only venue in the UK to pour three different sherries from full-sized aged barrels behind the bar, plans are afoot for some sort of ‘sherry museum’ in Bristol, featuring old historic sherry bottles and labels sent over from Spain. Naturally, there’s a huge sherry list – including a selection of rare ones – with wine preservation systems to keep them at the perfect temperature.

It forms part of a broader drinks list, featuring an extensive selection of gin tonicas and infusions, bespoke cocktails, Spanish vermouth (‘vermut’ – very fashionable right now) and interesting organic and biodynamic wines from all corners of Spain. “There won’t be Champagne or prosecco,” says Owen. “If you’re coming here, it’s Spain all the way! Sparkling Spanish wine is incredible, and a fraction of the price of Champagne.”

And so, with this hot new opening, the future looks rosy. Success in Bristol, says Owen, would be a “busy, buzzy, ‘go to’ tapas bar – a real hub of the community. If you want something enough, you just have to put everything into it and back yourself to make it work.”

Success is never guaranteed, of course, but given the Morgans’ previous form – driven by that forensic attention to detail, total dedication and hardened willingness to win – you probably wouldn’t bet against them…