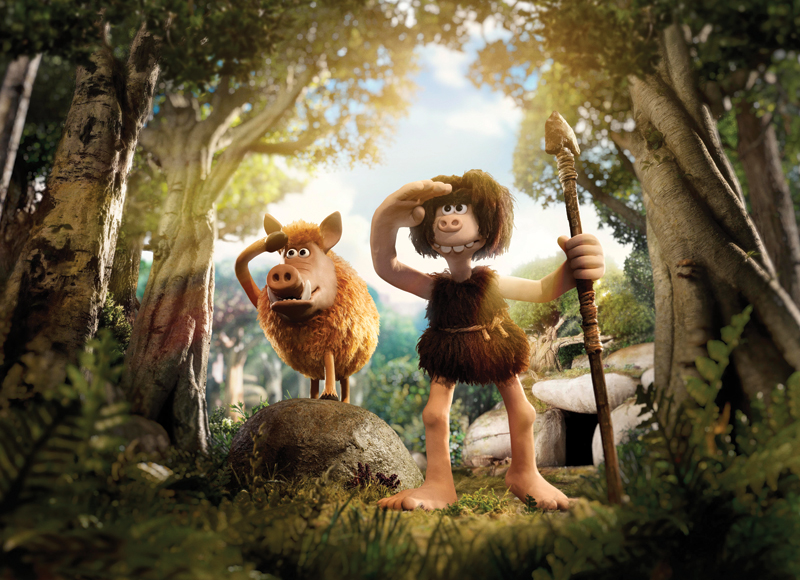 Take a team of 420 creatives, a bunch of Neanderthals, a discussion about national identity, and throw in a football match, and what do you get? For many this could sound like the beginning of a disastrous film, but under the dutiful care and precision of the clever minds at Aardman, you know you’re in for an hour or so of charming storytelling, quick wit and extraordinary animation.

The award-winning Bristol-based studio has been engaging audiences since the 1970s with its fun and insightful films, television programmes and advertising, and is most famous for creating the much-loved double act Wallace and Gromit, as well as hit films such as Chicken Run and the Shaun the Sheep Movie.

Then, in the depths of last year’s dreary January, Aardman launched its first feature film directed by Nick Park since the Academy Award winning Wallace and Gromit: The Curse of the Were-Rabbit in 2005. Four years in the making, Early Man tells the story of courageous caveman Dug (voiced by Eddie Redmayne) who lives with his Stone Age tribe. When their home is threatened by the evil leader of the Bronze Age army, Lord Nooth (Tom Hiddleston), Dug challenges him to an almighty game of football to settle the dispute over their home.

…The longest scene, which features in the exhibition, is 42 seconds long and took six weeks to shoot…

With a cast featuring the likes of Timothy Spall, Maisie Williams, Miriam Margolyes, Richard Ayoade and Rob Brydon, the film is set thousands of years ago and yet it touches on themes that resonate profoundly in the present day including debates around national identity and community.

Now there’s a chance to get a look at what it’s like behind the camera and see the remarkable work that goes on at Aardman’s studios at a new exhibition at M Shed. Ahead of the opening this month, we got a sneak peek at ‘Aardman: Animating Early Man’ from exhibitions officer Karen MacDonald…

What can visitors expect to see at the new show?

Get ready for original puppets, exquisite sets, tiny props and lots of behind the scenes footage – plus there will be some original Stone Age and Bronze Age objects from the museum’s stores, and two loans from The Ray and Diana Harryhausen Foundation. Visitors will get a flavour of how things look during the making of the film, in the model-makers’ studios and on the film set.

And it’s not just things to see – there are loads of fun things to do as well, from making your own mini stop-motion to dressing up as a member of Dug’s tribe in some fabulous outfits made by our wonderful volunteers.

What will visitors take away with them from the exhibition?

An understanding of all the many creative roles and processes that go into a film like Early Man – it’s so much more than the model makers and the animators. There is a small and very busy army of set dressers, designers, riggers, lighting technicians, sound engineers, camera operators, editors. And also the huge amount of fun they have alongside the hard work. Creative industries thrive in Bristol and we hope we’ll inspire young people to be the animation stars of the future.

Is there anything on display that will surprise visitors?

They might be surprised by the differences in scale of the sets. One is three metres tall, while others are tiny. Visitors will also get to discover what the sets and props are made of, which can sometimes be surprising – for example, the soap bubbles in a bathtub scene were made using a combination of glass beads, hair wax and Vaseline.

How many people worked on the making of Early Man and how long did it take to film?

The final credit list is around 420 people. There were 22 model makers and at the height of shooting there were 33 animators working simultaneously. The shoot itself took a year, but the whole process was about four years including writing, pre-production, production and post-production. The longest scene, which features in the exhibition, is 42 seconds long and took six weeks to shoot.

Where did the idea for Early Man first come from?

Director Nick Park made his first caveman film as a teenager (which you can see in the exhibition), so the roots of the idea go back a long way. He was starting to draft the characters that became Early Man well over 10 years ago while working on other films like The Curse of the Were-Rabbit. He says that it came partly from the nature of the clay itself – it’s ideal for Neanderthal expressions.

Why do you think stop-motion animation continues to be a popular form of film-making?

I think it has a really relatable, human element to it and a charm that just can’t be replicated with pure CGI. You know that you’re looking at something that has been lovingly made. Particularly with Aardman’s style of claymation – you can even see the animators’ fingerprints. As Nick Park says, it lends an inherent humour and warmth. The puppets, sets and props bring their own character, which comes with physical restrictions that require problem-solving. Maybe part of the draw is that it reminds us of playing with toys and puppets as children.

Did the film’s creators use any new technology or techniques?

Early Man is the first Aardman film to make significant use of CGI. There really wasn’t any other way they could create a football stadium filled with 30,000 Bronze Age football fans! But the traditional hand-crafted methods still take centre stage.