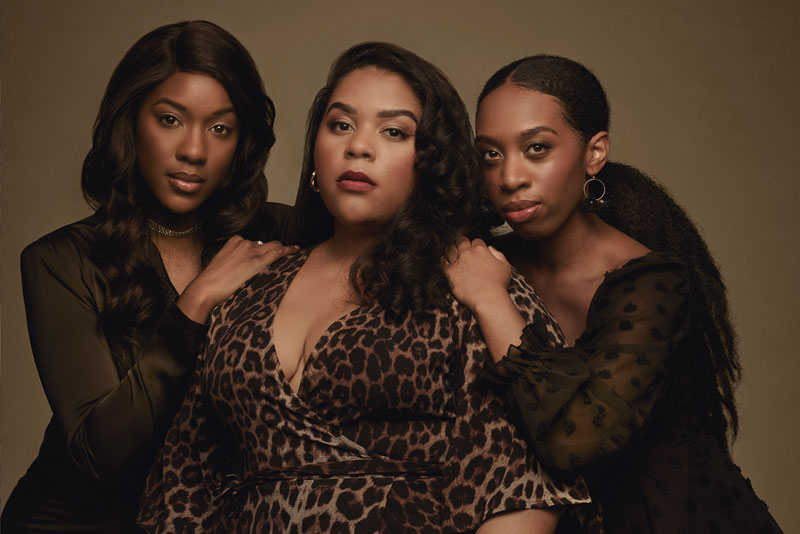 Beyond the Dreams: an interview with the cast of Dreamgirls the musical

Direct from the West End, the cast and crew of the Tony award-winning musical, Dreamgirls, are currently
preparing to dazzle audiences at Bristol Hippodrome in January 2022. After the first week of rehearsals,
Melissa Blease sat down with the four powerful women playing The Dreams to chat about the extraordinary story,
the unforgettable soundtrack and what it takes to deliver a showstopping performance…

Three young women, three exceptionally powerful singing voices, one big dream: you could say that’s the start of the story of every Girl Group since the all-American, all-female trio the Three X Sisters (formerly the Hamilton Sisters and Fordyce) shook FFup Vaudeville variety across the USA, Europe and the UK as early as 1923.
As the decades rolled by, the Girl Group genre moved with the times from The Andrews Sisters to Zhané taking in legendary, iconic GG acts including The Supremes, the Spice Girls, Destiny’s Child, The Shangri-Las, En Vogue, The Nolans, The Pointer Sisters and many, many more along the way; the list is endless and can never be fully comprehensive, while much controversy rages regarding which GG’s lead the ultimate top ten.

But beyond the gloriously glamorous outfits that are as intrinsic to the Girl Group genus as the big, BIG ballads are, one core fact remains the same: if the girls in any given Girl Group didn’t have the drive to follow up on their ambitions, they were never going to get beyond wannabe category. So, given the backstories woven into the very fabric that sticks the sequins to those slinky dresses, the real-life dramas behind the rise of the Girl Group were never destined to stay backstage.

And so it came to pass that, in 1981, Broadway audiences packed the Imperial Theatre for the premiere of Tom Eyen and Henry Krieger’s Dreamgirls: a lavish musical based on the real life stories of acts such as The Supremes and The Shirelles, following the tale of a young female singing trio from Chicago (The Dreams) on their journey to stardom. Dreamgirls was nominated for 13 Tony Awards and won six before being adapted into a 2006 film version starring Jennifer Hudson, Jamie Foxx and Beyoncé.

But as spectacular as the film is, Dreamgirls aficionados (and their numbers are legion) will tell you that you simply cannot beat the live show experience… and in January 2022, you can test that theory for yourself when Dreamgirls comes to the Bristol Hippodrome.

“The amazing thing about Dreamgirls is that the story is so real and relatable,” says Natalie Kassanga, who plays Deena Jones in the current touring production of the musical. “It really portrays the struggles for women within the music industry, especially back in the 1960s and 1970s when we simply weren’t able to have a voice, or stand up for ourselves, or navigate our own journeys without manipulations from other people, including managers who almost tried to build women into something that they’re not, or an artiste that they didn’t want to be.”

“Because all the lead principal roles in Dreamgirls are females who succeed despite the pressures around them, it’s a very empowering story, which is so important not just for a younger generation but for women of all ages, and men too,” adds Nicole Raquel Dennis, who plays the ineffable Effie White. So we’re definitely on role model territory here, then? “For sure!”, says Paige Peddie (Lorrell Robinson); “for me, seeing Dreamgirls when I was younger, and seeing women who looked like me going through their journey – I wanted to be like that! And now I’m an actual Dreamgirl too.”

As you may have gathered, we’re lucky enough to be talking to all three Dreamgirls for this interview… with a fourth thrown into the mix for extra-added sparkle. Without giving any of the plot away (there will be no spoiler alerts here, folks!), Effie – one of the original band members – is replaced by Michelle Morris before the group go on to achieve international stardom and a string of chart-topping hits.

Because all the lead principal roles in Dreamgirls are females who succeed despite the pressures around them, it’s a very empowering story, which is so important not just for a younger generation but for women of all ages, and men too

“Michelle is kind of the fourth “Dream”, stepping in to fill Effie’s shoes after all kinds of plot twists and turns force the change,” says Brianna Ogunbawo, who is herself stepping into new shoes in the role. “She’s very excitable, and understandably nervous about being the new girl in the line-up; it’s a completely new experience for her, and she’s trying to navigate it.” An interesting role indeed – but then again, none of The Dreams are one-dimensional.

“Our characters are so complex, so human, so relatable,” says Nicole. “In a nutshell, you could say that Effie is the sassy, ballsy, feisty one – really determined and hardworking, but often misunderstood.” “Lorrell is the kookie, excitable one,” says Paige. “In some ways, she’s the problematic one too. But she really speaks her mind, and goes for exactly what she wants.”

And Deena? “She’s the enthusiastic one,” says Natalie. “She’s very loving too. To Deena, The Dreams are her family, and she really reflects and concentrates on the relationships she has with her ‘sisters’ despite the fact that she too has a keen eye on turning her dreams into reality.”

Are there any aspects of the four actors’ own real life personalities in the roles they play? “I think I’m quite similar to Lorrell,” says Paige; “I sometimes think she’s just a bigger version of me,”

“In my real life, I don’t think I’d want too much of Effie’s attitude,” says Nicole. “But since starting rehearsals, I can definitely feel her in the way I carry myself with more confidence, off stage. It’s hard not to draw on your own experiences in a show like this, but as actors, it’s important that we separate the two; we can’t base our roles on our own lives, because we’re telling their stories. But I think the one thing all four of us have in common is that we all always wanted that kind of Dreamgirls success. I know for sure that when I was younger I definitely wanted that kind of visual, that Dreamgirls vibe. And now we get to be like that, we get to be them… and it’s very humbling.”

Strength, sass, sisterhood and sparkle: so far, The Dreams and I have discussed every component of the perfect recipe for ultimate Girl Group stage musical success… except one. A major part of this fast-paced, deliciously dramatic, diva-led drama is, of course, the music – and fans of the jukebox musical will be delighted to hear that there are around 34 unforgettable songs packed in, around and through the Dreamgirls dialogue and action, taking in everything from soft ballad to high energy, full-on dance floor anthems along the way. I Am Changing, Listen, One Night Only – even if you think you don’t know the greatest hits, you do. But there is one soaring, spectacular song that stands alone as the ultimate Dreamgirls moment.

“And I am Telling You I’m Not Going is a truly iconic song,” says Nicole (who, by the way, as a 2019 finalist on ITV’s The Voice, wowed viewers and judges alike with her rendition of the same song, which she duetted with team mentor Jennifer Hudson herself). “As Effie, I get to sing it every night. It’s one of those songs that you can’t ever plan in advance, or think about coming up – you have to do it in the moment, and commit to it in that moment.” And when she does, I guarantee that there’s not a dry eye (let alone an undropped jaw) in the house. And when the tears have been dried, the jaws re-hinged and the music stops: what can audiences expect to take away from the Dreamgirls experience?

Brianna: “On one level it’s quite educational, because the costumes change and the musical styles change as The Dreams move with the times. Dreamgirls tracks a music business evolution and, in a way, a revolution.”

Nicole: “It’s a jukebox musical, but the script is phenomenal, and the characters so fleshed out, so unique. The actual story at the core is incredible.” Paige: “It’s definitely a feel good show for every generation, for all ages. Some people will experience a sense of nostalgia for the Motown era, others will be introduced to
a brand new sound. But overall, the Dreamgirls vibe is exciting, uplifting, thrilling – it’s just beautiful.” n

Dreamgirls will be showing at Bristol Hippodrome from 5–22 January 2022. Book your tickets at: atgtickets.com/shows/dreamgirls

Previous
One World: Wildlife Photographer of the Year