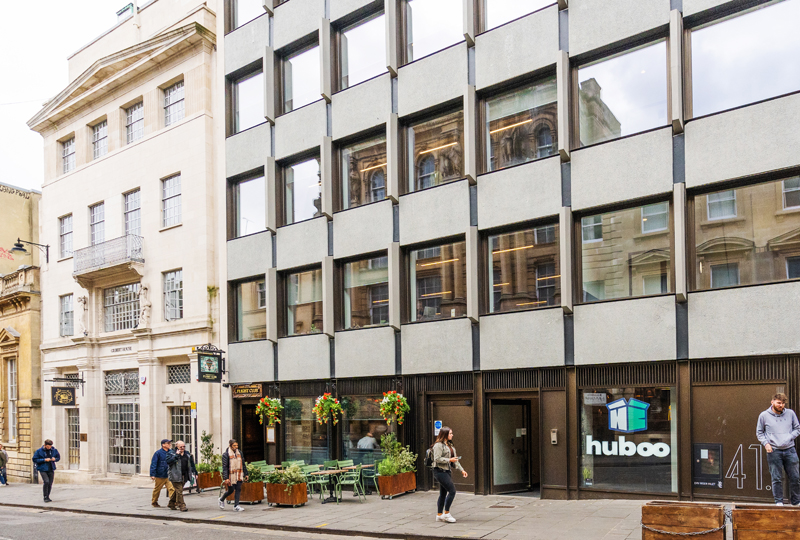 As one of the country’s fastest-growing e-commerce fulfilment firms becomes the principal sponsor of Bristol Sport, we find out all about the booming Bristol business, Huboo. This month, we sat down with co-founder Martin Bysh, who has been breaking boundaries to do business better…

If you’re not yet familiar with the name Huboo, now’s the time to get acquainted. Recently named as one of the best places to work in Europe, the Bristol-headquartered e-commerce fulfilment firm is one of the fastest-growing fulfilment companies in the UK. Born out of a secure storage room at a Safestore in Bath, Huboo has blossomed into a 600–strong team spread across the UK and Europe. After recently hitting the headlines with the news that it will become the principal partner for all five of Bristol Sport’s professional teams – a UK-first for a sporting group – we thought it was time we found out more about this extraordinary local success story.

On a particularly wet April afternoon, we sat down with CEO and co-founder Martin Bysh at Huboo’s HQ on Corn Street – an office that oozes contemporary class and creativity. He explained exactly how – in just five short years – he and fellow founder Paul Dodd managed to create a multi-million pound empire; one that has become known as the Amazon of the West Country.

Where it all began
Like all great ideas, the concept of Huboo derived from a conversation Martin and Paul had while standing on the side-lines of their sons’ Saturday morning football match. Frustrated by the lack of quality, trusted multi-channel fulfilment providers, they saw an opportunity to bring their entrepreneurial background and technology experience together. With complementary skills, they were able to create the company that we know today – a reliable enterprise that helps online businesses of all sizes grow by taking care of their e-commerce order fulfilment needs.

Since 2017, the founders have been refining their craft, creating an optimum customer experience and a failsafe business ecosystem. They have employed hundreds of new starters, won a multitude of awards – including the Global Business Excellence Award for Outstanding Innovation – and opened further warehouses in Chippenham, Eindhoven, Netherlands, Madrid, Spain and Leipzig, Germany. But what was the key to their exponential growth, we hear you ask?

First and foremost, Martin and Paul rebuilt the warehouse model from the ground up. They introduced micro hubs into the traditional warehouse model and powered each hub with an intuitive software that provides everything from transaction management and quality control to integration with popular marketplaces, such as Amazon, eBay and Shopify. From the get-go, this model dramatically improved the fulfilment efficiency and kept costs down.

What’s more, the founders designed well-rounded jobs to keep their employees happy. In turn, they found that their clients were eager to return. Moving away from the way in which fulfilment companies traditionally employ staff, hiring pickers to walk an average of 10 miles a day while preparing items for shipping, Huboo employed hub managers to carry out a range of different tasks within the micro hub setup. As a result, their days were kept varied and interesting. Managers would open up in the morning, lock up at night, stay in regular contact with clients and provide a personal service that ultimately allows businesses to grow and succeed at a faster rate.

“We have happy people that want to come to work and enjoy what they do,” Martin says. “We also have happy clients who get to speak to the people in the warehouse when normally there’s a barrier. Warehouse churn rates [the rate at which customers stop doing business with a company over a given period of time] are traditionally awful, whereas our churn rates in the micro hubs are near to zero.”

To prove that Huboo’s clients are, in fact, happy, Martin explains the company’s Net Promoter Score (NPS) – an index ranging from -100 to 100 that measures the willingness of customers to recommend a company’s services to others. It is used as a proxy for gauging the customer’s overall satisfaction and the customer’s loyalty to the brand.

“Our warehouses are at 56, which would be staggering for any business,” says Martin. “The highest score in the entire company, however, is the first micro hub we ever rolled out. It has an NPS of 76. Hardly any businesses have that score, whether they are office-based or work in luxury. We’re creating great jobs for great people. Unlike many fulfilment companies – we have nothing to hide – we’re proud of every part of our business.”

What makes Huboo particularly unique, however, is how it helps people move up through the ranks dynamically, allowing people to progress, learn new skills, and even forge a career path in a separate department.

“Warehouses are typically dead-end jobs. In the last year, we have had 50 people move from the warehouse to other parts of the business. People have moved into tech, into marketing, into sales and we actively try to help them do that. That’s the thing that myself and Paul enjoy more than anything else. Our position is: if people are really great, we just want to hang on to them. If they’re not happy where they are, we need to try and find a place that suits them.”

Harnessing the Huboo culture
After inventing an ingenious micro hub methodology, Martin and Paul implemented a culture of fairness, openness, collaboration and fun into their business; an environment where people can be themselves, work together and meet the needs of clients. The fifth floor of the Bristol HQ houses a working bar, climbing wall, games consoles and rooftop balcony, which allows a natural space for colleagues to meet and socialise, producing a real sense of community within the company. Every month Huboo also has a “Town Hall” meeting, hosted by the founders themselves, which is live streamed across all the offices and warehouses.

“You can’t run a white-collar organisation without caring about people,” says Martin. “We have 100 developers employed in this building and they could go anywhere tomorrow because they have lots of choices. What’s more challenging and what happens much less as a consequence is building great jobs for people who have fewer choices. Warehouse jobs are a great example of that. When we decided to build this business, we wanted to tackle the problems in this market. Typically people would innovate people out of the business – they would bring in technology and automation. They tend to have this assumption that machines are better than human beings. We do have robots because there are some jobs that you are just much better off getting robots to do. For instance, stock checking in our pallet warehouses. Asking a human to stock check can be both dangerous and tedious so it’s about having the right tool for the right job. We quickly realised that the ultimate multi-purpose tool, if you treat them properly, is a human being. You have to innovate around them; think of ways to make them happy and bring out the best in them.”

Bristol: home of innovative tech
Huboo has succeeded tremendously off the back of hard work, innovation and a genuine care for its employees and clients, but its location is arguably pivotal to its fast progression. Last year, Bristol was named as one of the UK’s fastest-growing tech hubs after firms attracted more than £100m in venture capital funding. Bristol is a start-up haven for so many reasons.

Firstly, the city is home to numerous leading universities and higher education institutions, which pump a pipeline of extraordinary talent into the city. This alone attracts a mix of tech companies to Bristol every year.

Secondly, Bristol is awash with hubs in various guises. The city’s incubator organisations, innovation centres and co-working spaces allow the tech community to thrive collaboratively and collectively. In turn, this creates a supportive start-up culture that nurtures each and every brand.

Furthermore, the city has a long history of technology and engineering innovation. From Brunel’s suspension bridge, to the aerospace industry and Rolls-Royce’s pioneering technologies, the city has been an engine of innovation for centuries. Civil Engineering was even among the first departments when the University of Bristol was born in 1909.

“Bristol has a great entrepreneurial network and this area punches above its weight from that point of view. We often get involved with the universities, mentoring students that are interested in being entrepreneurs and we try to utilise that early talent.

“Bristol is also a fabulous part of the country, a stunning place to bring up kids and an exciting place to be. The city will only get better as the government recognises that something exciting is happening here – more funding will come this way.”

Doing business better
As the European Green Capital, Bristol has pledged to become carbon neutral and climate resilient by 2030. This means the city’s businesses must help in every way they can to ensure that the city reaches its goal within the decade.

As more and more customers and employees also seek to buy from and work for organisations that align with their social values, support a better way of doing business and a better future for our planet, there is a real focus on what businesses are doing for the greater good of the environment.

“We try and think of these things holistically,” says Martin. “We think about what we can do now – we don’t obsess about things that might happen 100 years from now. In our warehouses, we have introduced Falk panels and made sure that all our vehicles are electric. We also have a no waste policy – if a client goes out of business, the goods are sold and the money is given to charity. At every stage of the business, we try to make sure that we’re essentially creating as little damage as we can and tidying up after ourselves where possible.”

Given the incredible rise of the company, not least five years packed with milestone achievements, you wonder how far this company can continue to grow at such a speed. Yet, Huboo was recently identified in a government report as one of three companies within Bristol’s burgeoning tech sector expected to attain a ‘unicorn’ valuation of more than US$1bn over the coming years. Martin and Paul are just getting started. Remember this name.

Next
City of Hope: in conversation with Mayor of Bristol, Marvin Rees
Start typing to see results or hit ESC to close
bristol gender film tv history
See all results