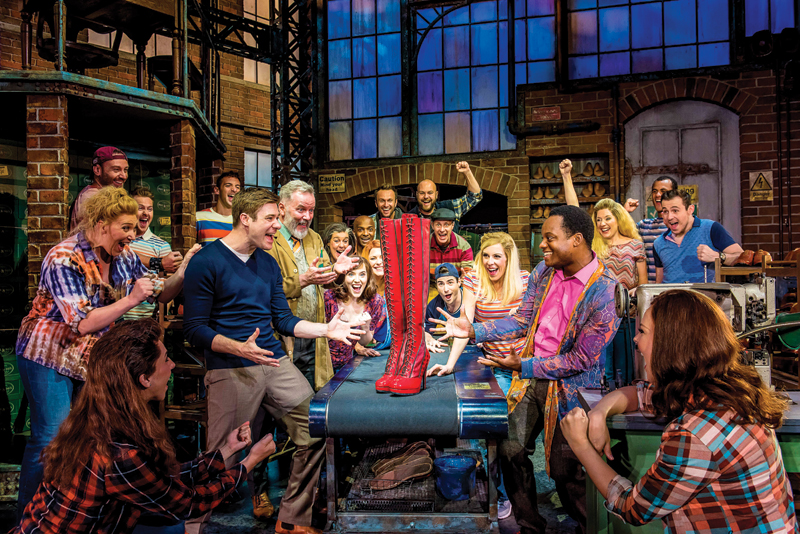 There’s no book, no bible, entitled How to Be Famous for Dummies – that’s according to Cyndi Lauper who, at 65, has not lost her New York drawl. “So you just do what you can,” she says. “All of a sudden you get to the top of the mountain and everybody around is like; ‘You can’t do that! Don’t do this! You’ll be ruined!’”

Above all, the Eighties’ punkiest pop queen who was catapulted to stardom with Girls Just Wanna Have Fun and Time After Time, was warned off musical theatre. “I was always being beckoned,” she remembers. “But I was like, ‘I can’t, because if I do my career is over.’ I would lose my credibility in pop. It was really a big divide. After a while you then get to a point where you think, ‘Well, I think I’ve been ruined enough, it doesn’t matter now, I can do whatever the hell I want.’”

The result is Kinky Boots, the musical mega-hit that conquered Broadway and the West End, now on a tour of the UK. The songs were written by Lauper, and in New York they won her a Tony Award for Best Original Composition. In 2016 the show went on to win three Olivier Awards – for Best New Musical, Best Costume Design and Best Actor in a Musical.

She had never written for theatre before, and became the first woman ever to win the Tony in the Best Score category on her own. “What I was really taken with was how that community accepted me,” she says. “To have these people, literally in my own backyard on Broadway, take me in was what got me.”

Aptly enough, acceptance is the take-home message of Kinky Boots. “Accept yourself, you’ll accept others,” says Lauper. “It’s a very important show at this time in the world.”

The show is loosely inspired by the story of an old family firm of Northampton shoe manufacturers that was about to go under, only to discover a new niche in the market: ladies’ footwear worn by men who like to dress up. The BBC told the story of the firm’s rebirth in the series Trouble at the Top. In 2005 it became a charming independent British movie which starred Chiwetel Ejiofor as Lola, a fictional cross-dressing diva demanding sturdy stilettos. But the ultimate destiny for such a fabulous story was always the stage. Kinky Boots the Musical, which explored the unlikely friendship between Lola and straight-laced factory owner Charlie, opened in Chicago in 2012, moved to Broadway the following year, and made its way to the West End in 2015. It’s also gone all around the world to territories including Canada, Australia, Germany and Japan.

…It’s a story about friendship and there’s a great redemption at the end. I’m a sucker for redemption…

But now it’s come home: the tour opened at the Royal & Derngate in Northampton, the quiet town in Middle England where it began.
“I would have liked to have been there, because I just think that part of it is special,” says Lauper. But she advises against thinking of Kinky Boots as a specifically English show. “It’s a story about a really great friendship and two very, very opposite people and there’s a great redemption in the end. I’m a sucker for redemption.”

Perhaps there has been some redemption for Lauper too. She was a huge star in the Eighties but, as with most of her contemporaries bar Madonna, gradually slipped from the top of the chart. She was thinking of creating a musical about her upbringing in Queens when she got a call from her friend Harvey Fierstein – theatre royalty, writer of the hit play Torch Song Trilogy about a gay drag performer, and the cross-dressing star of the musical Hairspray.

“He said, ‘I’m doing a show called Kinky Boots. Would you like to write the music for me?’ I thought, ‘Wow’. He told me I had to watch the film. I loved it. I thought, ‘Oh I get it. He wants me to write 12 good pop songs with a good hook.’ I figured, I could do that. Then I realised you have to move the story along.”

She set about composing anywhere and everywhere. “I brought my phone along with me and I recorded melodies on it. I belonged to a gym where they had a track on an upstairs roof and I would walk and sing and write. When I woke up in the middle of the night I picked up my iPhone.”

The product of four years’ development is a string of catchy numbers from wig-out dance anthems to heart-stopping ballads, among them The Most Beautiful Thing In The World, The Sex Is In The Heel and Not My Father’s Son. Ideas came from surprising sources. She thought of the shoe factory workers as Monty Python’s knights of the round table. The History of Wrong Guys, a comic scene-stealer about a woman who has bad luck with men, was inspired by a line from Kung Fu Panda. “I gave everybody a different style because everybody has a different jam when they’re in the shower singing.”

She didn’t really think about writing for specifically English characters. “When England started doing pop music it sounded like American music. Their translation of Duane Eddy and the Everly Brothers and Chuck Berry was the Mersey Beat. It was different but still based on rhythm and blues. It wasn’t like Harvey asked me to write some foreign stuff. You’re not going to ask me to write an opera. I don’t study opera.”

What she did study as a child was her mother’s record collection, which was full of musicals such as My Fair Lady, another study of the English written by Americans. “I did what kids do: I would play each character. I sang Stanley Holloway’s part, Rex Harrison’s part and Julie Andrews’ part.”

At the Tony Awards in 2013, Kinky Boots was up against Matilda the Musical, with words by Tim Minchin, which was considered the favourite to win. “I was constantly asking Harvey if it was a hit and he was saying, ‘I don’t know yet, Cyn. We have to win Best Musical.’ So when it won Best Musical I said, ‘Is it a hit now?’”

See it and judge for yourself. You’ll never think about shoes in the same way again.

Featured image: The show is loosely inspired by an old family firm of Northampton shoe manufacturers that was about to go under, only to discover a new niche in the market: ladies’ footwear worn by men who like to dress up (photo by Matt Crockett)