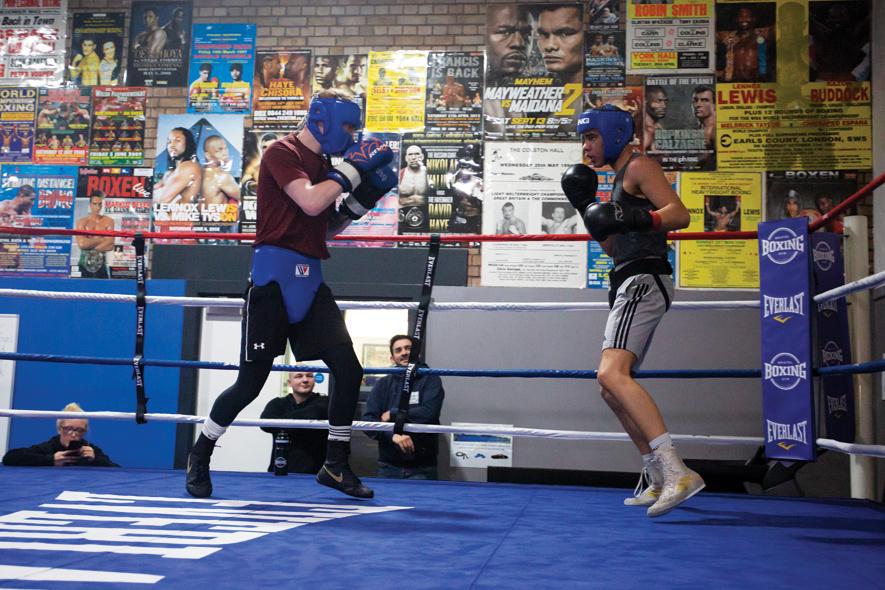 A local charity has helped some of Bristol’s most vulnerable young people to stay out of gangs and remain in education. Following a recent royal visit, Jessica Hope met co-founders Martin Bisp and Jamie Sanigar to discover how they are making a real difference to young lives

Boxing is just a small part of what Empire Fighting Chance does. By providing mentoring, education support, sports therapy and careers guidance, the Bristol-based organisation helps young people aged eight to 25, from the city’s most deprived areas, to build their confidence and aspirations, while encouraging them to stay in school, and assisting in overcoming mental and physical health problems through a range of programmes.

Based at the Bristol Boxing Gym in Easton, it sees more than 3,500 young people through its doors every year – referred through schools, pupil referral units, and Avon and Somerset Police. Most come from challenging backgrounds – poverty, difficult family situations, parental unemployment, nutritional deficiency, crime and drug abuse are just some of the issues they face. Many have behavioural issues which have resulted in exclusion from school, and suffer from anxiety, depression, anger and low self-esteem or motivation.

But the boxing gym offers a chance to change that. By creating the UK’s largest non-contact boxing school engagement programmes, the charity not only helps these young people boost their fitness through non-contact boxing sessions in the evenings and weekends; they can also get assistance with their education through English and maths sessions and homework classes; work with a qualified therapist; train alongside boxing champions and professionals (Commonwealth Super Bantamweight Champion Ashley Lane and the first female British European Super Flyweight Champion Ashley Brace just to name a couple); and get the vital support they need to find work experience and progress into a career.

It’s through this combination of services that co-founders Martin Bisp and Jamie Sanigar see significant changes to these young people’s attitudes and outlook on their future. The children quickly learn that when you’re in the gym, there’s no swearing, no smoking, no shouting over each other or the coach. “What we do here is built on respect and improving behaviour,” says Martin. “A councillor visited the club recently and said how shocked they were that despite many of these kids being involved in local gangs, they were silent when the coach was talking – it’s all about respect.” And it’s these changes in attitude that the young people can then apply to their lives outside of the gym.

“We get them to do things that challenge them and it builds their confidence because if you don’t challenge yourself, then you won’t learn,” says Martin, referring to a new programme where a number of the teenagers are currently teaching cricketers from Gloucestershire Cricket Club how to box. “They were terrified at first, but after the first session, their confidence grew and they were loving it.”

And the results show just how these programmes are making crucial differences. 92% of the young people targeted saw an improvement in their attendance at school, 88% were no longer deemed at risk of exclusion, and 81% felt more positive about their future. This reflects the charity’s key value regarding education. “Most importantly we encourage them to stay in school. If you stay in school and get an education then you are on the right track,” says Jamie.

Rolling with the punches

Achieving these remarkable results, and having recently got the nod of royal approval during an official visit from the Duke and Duchess of Sussex, Empire Fighting Chance has come a long way since Martin and Jamie first started up more than 12 years ago.

From 2004, Martin (who was working in the corporate world as a business analyst) had been voluntarily running the Empire Amateur Boxing Club which had been going in inner-city Bristol for more than 50 years, producing numerous national boxing champions. On the other hand, Jamie followed in the footsteps of his dad (boxer, trainer and gym-owner Chris Sanigar) and had been on the Bristol Boxing Gym scene from a young age, helping to train and promote local boxing talent.

The charity’s story begins when, one night at the gym in 2006, Martin and Jamie noticed two young men dealing drugs nearby. “I’m not sure what motivated us that day, but we decided to intervene. We invited them into the gym for a personal boxing session and were surprised to find that they agreed. Word of mouth spread and over the following weeks they kept coming back, bringing more and more friends with them,” says Martin. Six weeks later, he and Jamie were unexpectedly teaching 50 young people how to box.

“We were just a little boxing club doing a community job. We never imagined it would get this big…”

Quickly they discovered that what they were doing was having a positive impact on these children’s physical and mental health. A teacher approached them both to tell them their student’s behaviour had changed significantly and asked if more students could get involved. “We were just a little boxing club doing a community job. We never imagined it would get this big,” says Martin.

Despite getting positive results fast (more students were staying in school, their concentration had improved and many were less likely to join gangs), Martin and Jamie soon found that it wasn’t just boxing that a lot of these young people needed – many urgently required emotional, medical and education support that they just couldn’t get through local services. So they began providing tuition and plans to help those in need of mental health support, and for around six years they voluntarily ran these services for the local girls and boys before setting up Empire Fighting Chance as an official charity in 2013.

As demand grew, they moved premises to a new building on Lower Ashley Road – the ideal location between some of Bristol’s most deprived wards including Lawrence Hill, Ashley and Easton. “The building had been the main youth centre in the local community for the last 40 years and was closing down. So we salvaged it and were able to continue its place in the community,” says Jamie.

With the help of a grant from the Big Lottery Fund, and support from trustees such as the former MP for Bristol North, Charlotte Leslie, the charity has developed rapidly over the years and now employs 22 people, from coaches to boxing therapists. And in recent years the trustees were even able to persuade Martin and Jamie to stop voluntarily running the place and come on board as CEO and COO, respectively.

With its modern facilities, the gym has been able to extend its classes to appeal to more members of the local community, and to include a weekly boxing session just for Muslim women. It’s run by coach Shiren, who is a #BristolGirlsCan representative (part of a national campaign to encourage women to get active and break down barriers), and during these sessions the windows to the training room are covered up and the women have access to a female-only changing room next door. News of this class quickly spread and now at least 15 to 20 women attend regularly each week, allowing them access to a private and safe space to train and build their confidence, as well as their fitness.

The charity also now has strong links with local businesses and national companies which help with setting up work experience for the teenagers and young adults involved with the club. “We bring it back home for local business leaders and show them how there are these kids living in deprivation just half a mile away from their offices, and that they could help make a positive impact on their lives,” says Jamie.

As part of the charity’s careers programme, 14 to 25-year-olds can visit companies such as the DoubleTree Hilton Hotel, Rolls Royce, Tobacco Factory Theatres and Bristol Rovers Football Club and see, first-hand,
the work people do there. This experience inspires these young people to think about their future career path – something which many of them may never have imagined before.

As a result, 90% of targeted young people involved with Empire Fighting Chance have progressed into employment, training or further education, and 88% say they are more confident – demonstrating how initiatives like these are vital in encouraging aspirations and developing workplace skills that can help them in the future.

The remarkable effect the charity is having on these young people hasn’t gone unnoticed, especially during the Duke and Duchess of Sussex’s recent visit to the boxing club. “We hoped it would be Prince William or Harry visiting because of their work in promoting the connection between sport and mental health,” said Jamie, speaking about being approached by Lord Lieutenant of Bristol, Peaches Golding, about a possible royal visit.

Despite the threat of heavy snow, the royal couple was undeterred and the visit was a resounding hit with the children. “Harry and Meghan got exactly what we’re trying to do here. And they gave those kids a day that they won’t forget,” says Martin. And for those who have been involved in crime or excluded from school in the past, the visit has changed people’s perceptions after seeing them in such a positive environment. “The visit has even made some of the parents look at their children in a completely different way after seeing them talk with the Duke and Duchess and learning about what they do here at the club.”

After being thrust into the national news, Empire Fighting Chance has been inundated with requests from coaches across the country, enquiring as to whether the charity’s unique programmes could be implemented in other cities to help more young people around the UK. While it’s already working in areas across Bristol, South Gloucestershire, North Somerset and South Wales, there are plans in the pipeline to expand its programmes into Devon and Cornwall, and it wouldn’t be surprising to see the charity expand nationally in the years to come.

If you’re looking for recommendations for the unsung hero accolade at the next Sports Personality of the Year awards, you don’t have to look much further than the dedicated co-founders and staff at Bristol’s Empire Fighting Chance. Learning how to box is just the start of what can be a life-changing experience for a young person when they walk through the doors to that gym. Now, pass me those gloves…

Photography by Gareth Aldridge/Down and Out; downandoutmedia.com; and Kane Rich – Empire Fighting Chance

Next
Nuffield Health: Meet the experts who could improve your health
Start typing to see results or hit ESC to close
bristol gender film tv history
See all results