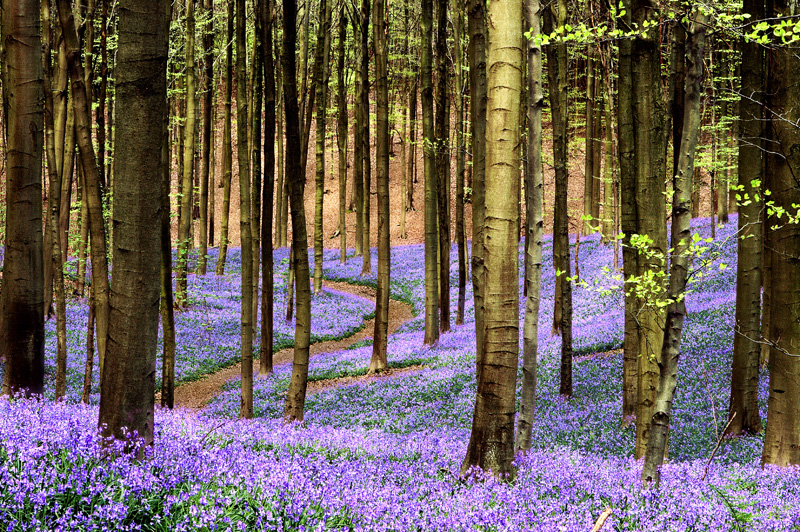 This month: bluebell woods to make you go “Wow!” Words by Pete Dommett

Flowers? That’s a bit boring, isn’t it?” This was a friend’s response after I told him what I was writing about this month. And while I agreed that wildflowers might not have the obvious wow factor of some of the other wildlife (like kingfishers, otters and peregrine falcons) that has featured in this column, I challenged him to visit a bluebell wood in full flower at the end of April and not be immediately moved by its beauty.

Walking through a woodland carpeted with countless numbers of these famous blue blooms is one of the simplest joys of spring. And it’s a very British thing – thanks to our moist and mild climate, the UK is home to around half the world’s bluebells and the most spectacular displays. The best time to view them is on an overcast day, especially after an April shower. Close your eyes halfway and the flowers fuse together in a sea of the purest blue. On sunny days, the haze of colour takes on a purplish hue.

Get down on your hands and knees and have a close-up look at an individual flower. You’ll count somewhere between five and 15 ‘bells’ at the top of each stalk, the weight of which causes the bluebell’s distinctive droop. These open in a strict sequence, with the lower flowers first to unfurl and the bells at the very tip of the stem being the last to flourish. Then there’s their scent: a delicate, sweet perfume that pervades the air around you.

Bluebells grow across the country but, as spring spreads slowly northwards, we in the West Country get to enjoy them before most people. Mass blooming usually begins by the middle of the month, but this depends on our increasingly unpredictable weather. In 2018, the Beast from the East smothered new shoots with a blanket of snow and delayed displays. Conversely, an exceptionally warm end to the winter this year could mean an early show.

Bristol is surrounded by some brilliant places for bluebells. These include Prior’s Wood and Weston Big Wood (near Portishead), Dowlings Wood at Folly Farm (near Pensford) and Lower Woods (near Wickwar), which are all managed by Avon Wildlife Trust. The National Trust’s Leigh Woods and Tyntesfield estate are also good spots to see them. If you visit any of these areas, then stick to the paths to avoid trampling on the plants. Damaged leaves can affect the ability of the bulbs, hidden underground, to reproduce and generate flowers for next year.

…Thanks to our moist and mild climate, the UK is home to around
half the world’s bluebells and the most spectacular displays…

Bluebells can be found in good numbers nearer the city – in Arnos Vale cemetery and at Ashton Court, for example. But in urban areas, they face a more insidious threat. The Spanish bluebell is a cultivated and vigorous variety – bigger, straighter, more variable in colour, but with little scent – that has escaped over the garden wall and now crossbreeds with our native plant, producing hybrid flowers with ‘watered down’ features. The charity Plantlife claims that one in six British woods have been invaded by the Spanish species. Avon Wildlife Trust’s Willsbridge Valley reserve, near Longwell Green, is just one local example of where the plant is now present. If this hybridisation continues, our beloved British bluebell could, one day, be lost completely. So get out there this month and find some ‘proper’ bluebells while you still can. Squint at them, sniff them and say “wow!” to these wonderful wildflowers.

• Keep up-to-date with bloomings at naturescalendar.woodlandtrust.org.uk

Featured image: The best time to view bluebells is on an overcast day, especially after an April shower. Each has between five and 15 ‘bells’ – the weight of which causes the flower’s distinctive droop