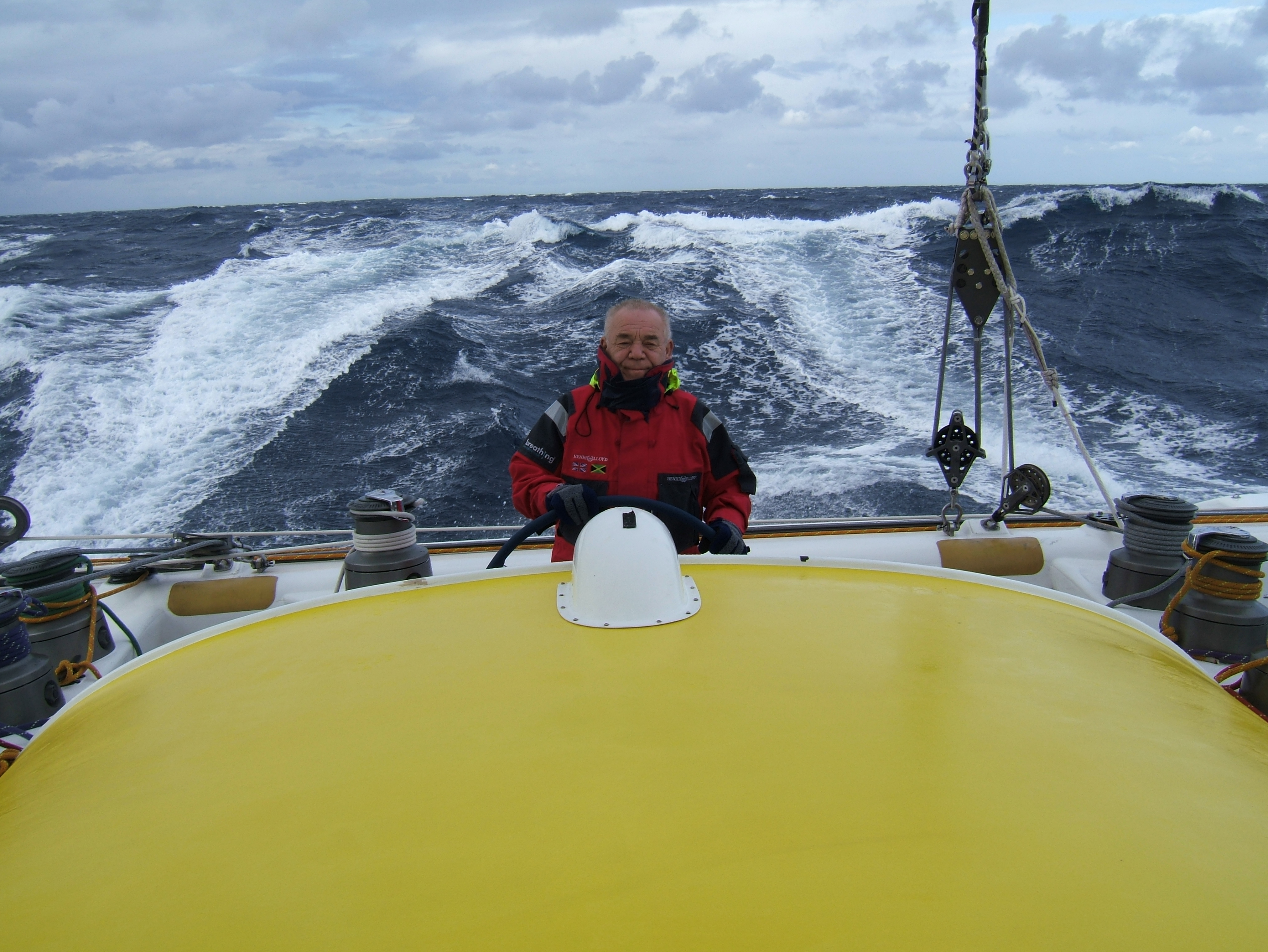 It’s 20 years since round-the-world solo yachtsman Tony Bullimore survived six days trapped in freezing waters under his capsized boat. Emily Horton finds him ready for his next adventure; his appetite for the high seas unabated

They call him the Bristol bulldog and it’s easy to see why. Music maestro, community champion and solo sailor, Tony Bullimore is a man of many guises and a giant of life’s adventures. In 1968, he co-founded the city’s famous Bamboo Club which became one of the country’s leading venues for Afro-Carribean music. Initially established as a place that the city’s black and immigrant residents could celebrate their musical heritage, it became a beacon of social cohesion at a time when discrimination against non-whites was commonplace. It went on to become so feted that even Bob Marley graced its stage twice.

Then, in his thirties, the nightclub proprietor took up sailing and in just 14 years, rose to the top of his class to become Yachtsman of the Year in 1985. But it was narrowly escaping death during a solo, round-the-world race which catapulted him into the public domain and became his most formidable feat to date. As I speak to the ebullient sailor from his home in Stoke Bishop, he is in reflective mood.

“It has been 20 years since my accident, but it never scared me into giving up sailing,” Tony says with the characteristic courage and determination that got him his nickname.“Traversing across the world’s oceans – come rain or shine – is what I do.”

It was January 1997 when the then-58-year-old was plucked from the depths of the Southern Ocean after surviving five days in an air pocket of the upturned hull of his yacht, the Exide Challenger. The long-time Bristol resident had been competing in the Vendée Globe single-handed, non-stop round-the-world race when the boat capsized in a freak storm.

Known as the toughest yacht race in the world, the four-month event had started from Les Sables d’Olonne in Western France in November 1996. Tony hadn’t had the best of starts, but conditions seemed to be improving. He had seen in the New Year and was enjoying good weather when he had spoken to his wife, Lalel, on 3 January. Then, the next day, his fortunes changed.

With his weather report machine broken, and being unable to request up to date reports on the conditions – without contravening race rules, Tony had no warning of the massive storm which was heading his way. “Mariners of years past would say that when you’re 40 degrees south of the equator, you’re ‘in the roaring 40s’ as conditions become evermore precarious. If you continue to 50 degrees South, they call it the screaming 50s; and if you dare to venture further still to 60 degrees south – well, then you’re in the impossible 60s…” he recounts with a chuckle. It’s where the fearless Tony was when he hit the mother of all storms. “I remember looking towards the southern horizon and seeing a sliver of black clouds. It was a major weather front that would soon be playing its part in creating a massive storm that meteorologists refer to as a ‘bomb’.

“I then saw a dirty grey mass stretching right across the horizon in an unbroken line… It was a rogue wave, some eight storeys high. Billions of gallons of water were rolling across the ocean and looking for something to slow it down,” he recounts. “Then I saw another…

“When the waves first hit, it was like the biggest of rollercoaster rides,” he muses, “but soon I had 60ft waves coming at me from two different directions and I realised that it would take just one of those mammoth waves to catch the boat at the wrong moment for me to be in serious trouble.”

After several gruelling hours at the helm, trying to fend off the pitching waves, Tony retreated into the cabin for some much-needed food and rest. “Realising that the storm could continue for days, I got the boat to sail by herself on autopilot so I could scramble downstairs and get some food,” he recalls. A long-time fan of reggae and ska music from his days running The Bamboo Club, Tony put on some favourite tracks and opened a bottle of rum that was given to him by friends back in Bristol. As Tony recalls, when it’s getting hairy up above; “A strong coffee, lashed with the best of Jamaican rum, certainly does the trick…” But his respite wasn’t to last long.

“I heard an almighty crack and suddenly found myself sitting on the ceiling with the floor above me; foam and water surging beneath the windows under my feet.”

The yacht’s keel – which gave the boat its buoyancy and ability to right itself – had snapped off, flipping the boat upside down. “I was marooned some 1,500 nautical miles off Australia in the general direction of Antarctica and a further 1,500 miles from the nearest shipping lane,” he says ruefully. “In the pit of my stomach, I knew that I was knocking on death’s door.”

Born into a working-class family in Essex in 1939, Tony recalls how he had always set tests to challenge himself from a young age. “Ever since I was a boy, I have tried to find my limitations and pushed myself out of my comfort zone. I remember taking cold baths because I thought it would toughen me for what might lie ahead in my life,” he chuckles.

Bringing that early premonition to fruition, the boat’s boom – now banging against the underside of the boat – punched a hole in the deck, plunging the cabin into darkness and allowing icy water to surge in, submerging Tony to his chest. “I kept telling myself that thanks to the law of physics, the boat was not going to sink and the water would stop rising at the waterline…”

Luckily, Tony was able to trigger his EPIRB, a satellite distress beacon, which was picked up by maritime rescue. But before he could see dry land, he had lost part of a finger and hypothermia had taken hold. “To access my liferaft, I had to open a door submerged underwater,” he continues. “As I went under to pull it open, a sudden surge of water forced the hatch shut with an incredible pressure – my hands slipped and I felt a jolt of pain… I brought my hand out of the water to see a stub of jagged bone and blood where one of my fingers used to be,” he recalls, matter-of-factly.

Eventually, after five days, Tony received his salvation – the Australian Navy which had been travelling for three days at sea to search his boat for life within, finally reached him and started banging on the upturned hull for signs of life. With his body battered and bruised, it was time to make a last-ditch attempt to escape his icy cell and swim to the water’s surface. “I had sailed more than 35,000 miles in Exide Challenger since her launch and I knew every creak, groan and whisper. She was my world,” he says. “But I tell you, I owe my life to the guys aboard HMS Adelaide, I really do…”

After respite in hospital and treatment for hypothermia, Tony returned home to his beloved Lalel, but, unsurprisingly given his bulldog nature, it wasn’t long before he was back at the helm.

He is now organising his next racing project and will soon be back on the high seas, but before he does, the drama of his Southern Ocean survival is being played out on stage in a new musical by Roxanna Panufnik. The International Youth Arts Festival in Kingston-upon-Thames, Surrey, is hosting Upside Down Sailor which reenacts Tony’s dramatic rescue. And naturally, keen not to miss out on the action, Tony will be attending the gala performance on 7 July and doing a public Q&A beforehand.

As our conversation draws to a close I realise that Bullimore is the perfect name for this capable, tenacious sailor; for he will always be after more of life’s adventures, more of its challenges and more of its passions. Watch out for this loyal son of Bristol because – aged 78, and with plenty of ideas, drive and energy for public speaking events, business ventures, charity work and transatlantic races – he hasn’t had his fill of life’s challenges just yet.

Previous
Travel: Hip to be in Hamburg