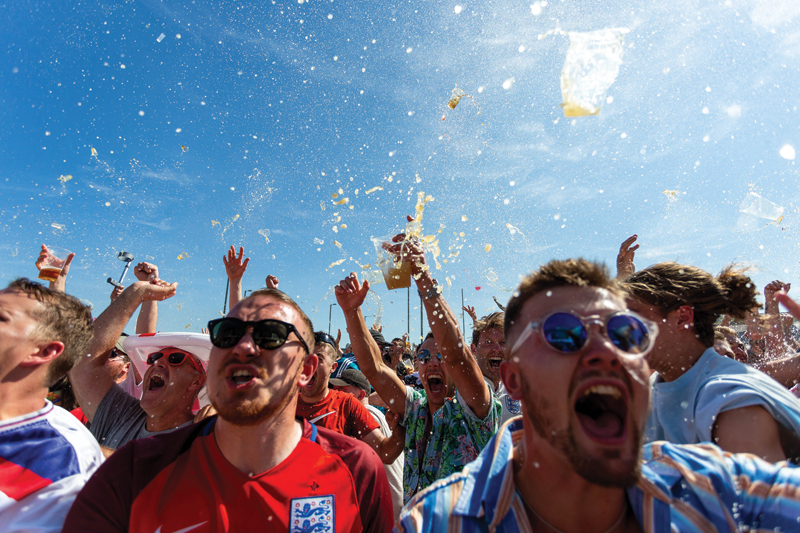 Still riding high from England’s sensational run at the World Cup, we look – a little closer to home – at the challenges ahead for Bristol City as the new Championship season kicks off this month. Words by James Crawley

Ashton Gate Stadium is traditionally known as the home of Bristol City (and, since 2014, the newly named Bristol Bears rugby team) but for the best part of a month this summer, it became known as the place to watch the World Cup.

With England’s run all the way to the semi-finals, it felt like the nation collectively held its breath, cheered and ultimately sobbed when it all came to an end, during their last performance against Croatia.

Anyone watching news coverage of various fan parks around the country couldn’t have failed to see the jubilant beer-throwing moments of celebration when England scored, and Ashton Gate was no exception. 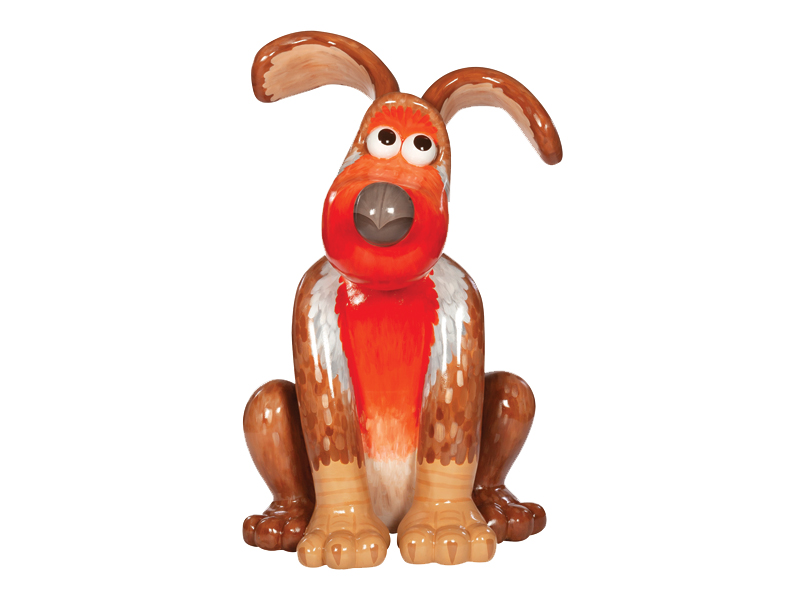 The transformation from car park to fan village was astounding and meant that, despite the off-season, the stadium was bursting with activity. Indeed, the fan village, sponsored by Gorilla Grass, was such a success that it welcomed more than 30,000 fans to BS3, with the last few England games ticket-only affairs.

With a choice of two enormous permanent screens (one inside and one outside) it meant that fans could opt for sunshine or shade (who would have thought we’d have such good weather for watching the World Cup for once?!) and the event underlined the stadium’s reputation as the place to watch the big sporting moments.

Of course, just as the World Cup kicked off so did Bristol’s Gromit Unleashed 2 trail; once again Ashton Gate is proud to play to host to one of the memorable sculptures. Visitors to BS3 are now able to spot Gromit sporting a Rockin’ Robin theme to ensure he settles well into his surroundings just outside the sports store. 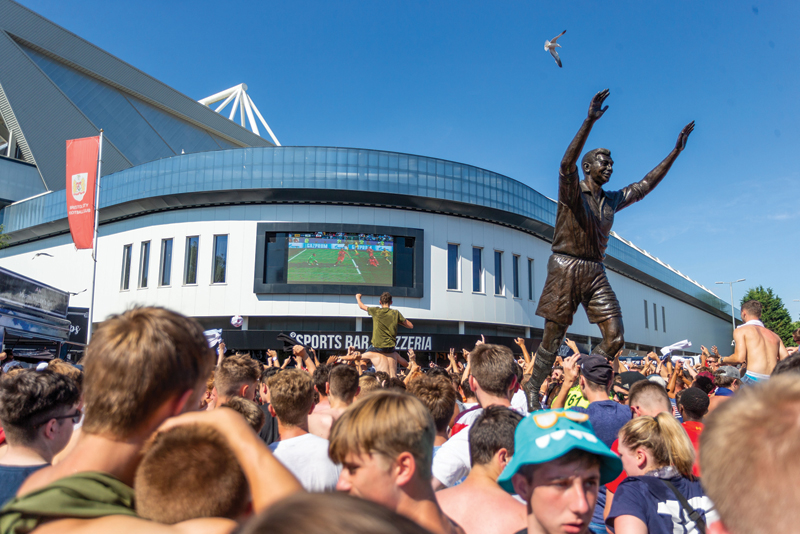 The outdoor section of the fan village

With the World Cup over for another four years, attention has now turned to what promises to be another action-packed campaign for Bristol City.

The new season arrives with Lee Johnson’s squad fresh from their highest league finish for eight years, having fought in a season-long play-off challenge during 2017/18.

Of course it was a year of ups and downs but what the City head coach achieved in only his second full-season at the club was more than admirable. In fact the style and tempo of the football played suggests bigger and better things may be on the club’s horizon.

Away from the Sky Bet Championship, City made history as they reached the semi-final of the Carabao Cup for the second time since 1989. Eventual Premier League winners Manchester City proved a step too far but the Robins more than matched their opponents over the two legs in January, which included a first-ever packed-out away end at the Etihad Stadium.

The memorable cup run saw Bristol City dispatch four other Premier League opponents en route to the semi-final, not forgetting a magical night at Ashton Gate as the team overcame Jose Mourinho’s Manchester United in the quarter-final round; Korey Smith’s 90th-minute winner will no doubt be replayed many times in the years to come.

They bring a wealth of Premier League and Championship experience and arrived for the beginning of pre-season, giving them time to adjust to new surroundings and bond with teammates ahead of the 2018/19 season opener against Nottingham Forest at Ashton Gate on Saturday 4 August.

Behind the scenes, the staff said goodbye to head physio Steve Allen and welcomed two new experienced additions to the medical team in Andrew Rolls, who recently departed Arsenal, and Andrew Proctor from Oxford United.

Andrew Rolls brings with him almost two decades of experience with clubs in the top flight, while Andrew Proctor played a significant role in the development of the medical department at United, which saw the League One club share promotion and two Wembley finals. 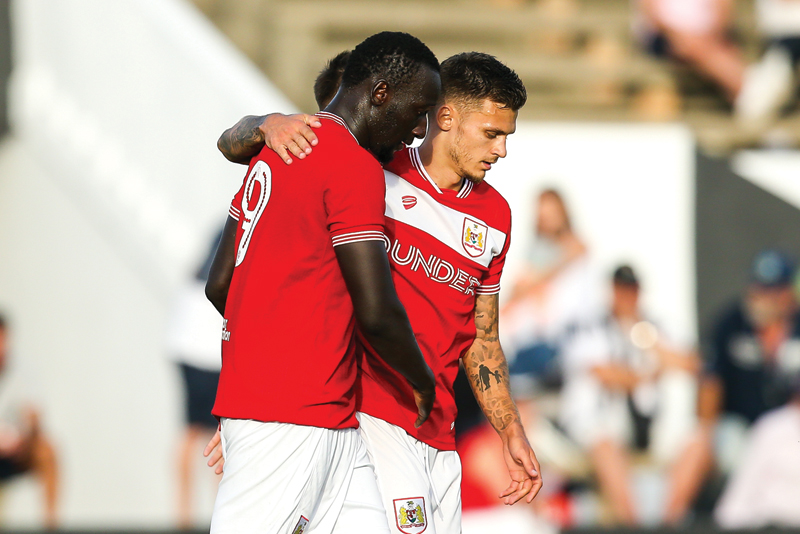 There have also been more exciting developments off the pitch with the launch of a new, bespoke club mobile app which will both enhance fans’ matchday experience and bring the traditional matchday programme to life in the forthcoming campaign.

The app offers the club’s in-house video interviews and breaking news at the swipe of a finger, as well as making use of augmented reality which will work in conjunction with both the programme and elements of Ashton Gate as fans walk around the stadium on a matchday.

The summer of exciting launches didn’t end there either, as the club has unveiled new-look home, away and third kits. As the purple and lime colours switched to become City’s third strip, the club revealed a fresh-looking white strip for away trips in 2018/19.

This kit, alongside the anthem jacket and training wear, exclusively welcomes the return of the Robin crest. It hints at the kit of the late 1980s, an era which saw City lift the Football League Trophy in 1986, followed by promotion from the old Third Division in 1989. 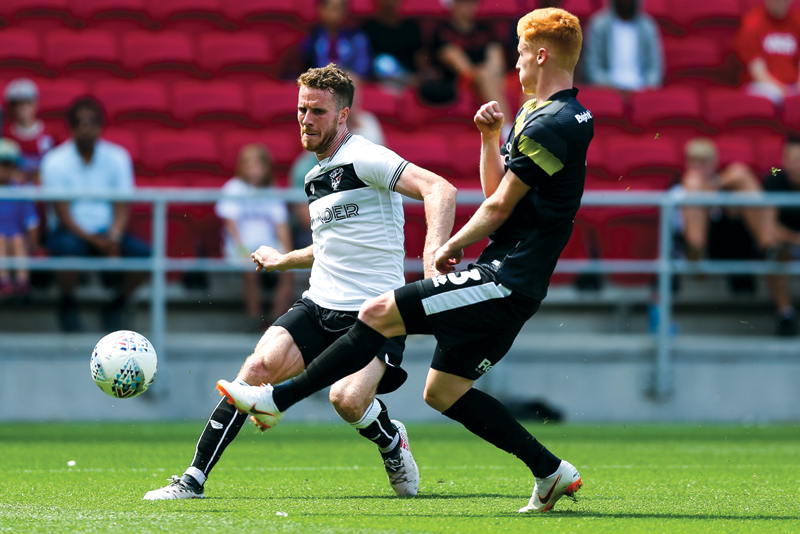 So there is plenty to be excited about as football returns to the red half of Bristol, and everybody at City – the fans, players and staff – are relishing another promising adventure.

The club will look to learn the lessons from last season but knows it has the capabilities to compete with the best. If Bristol City can figure out that perfect formula, which they are more than capable of doing, they could just be about to make yet more club history.