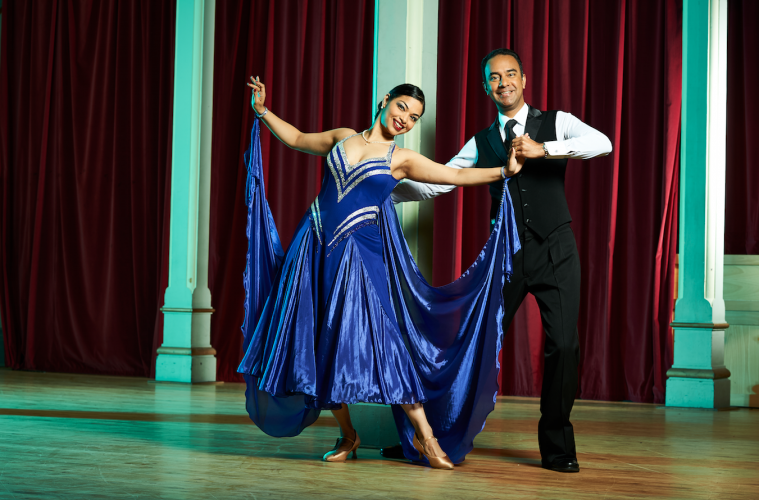 A local couple make their television debut tonight in The Secret Life of the Ballroom – which follows five pairs of amateur ballroom dancers as they prepare to embark in competitive ballroom dancing for the first time. The series, on W, follows them over three months as they attempt to master six classic routines, including samba, jive and the quickstep, while pulling together show-stopping outfits to help them impress the competition judges. Vanessa and Paul, the contestants representing Bristol, told us more… Where in Bristol are you from?

Paul has been part of the community in Bradley Stoke for over 15 years. His bass voice has been shaking the rafters in the parish choir at Holy Family church, Patchway for nearly as long. Vanessa moved down a few years ago from Glasgow and their voices have both featured regularly in the Sunday choir. In the summer and autumn you’ll find them foraging for wild apples and blackberries or swan-watching around the Three Brooks Nature Reserve in North Bristol. Sometimes you’ll find them antique hunting at the car-boot sales in Whitchurch or Easter Compton, or having a quiet saunter around the Floating Harbour, getting a cheeky masala dosa in Easton, or nosing around the independent shops on Gloucester Road. Vanessa grew up in Oman; and Paul in Kenya, so their tastes are pretty diverse.

Why did you both decide to take part in the show?

Paul: Since we first met, and went for a ceilidh on our first date in Glasgow, it was obvious that dancing was in our blood. I’ve dreamed about us participating in ballroom competitions together since I first met Vanessa and discovered she was crazy about dancing. But we never did anything about it as, well, life got in the way.

Vanessa: When I saw an ad on Facebook inviting auditions for the show, I thought it was now or never, so I grabbed Paul, went to London to show off our skills and the rest is now history!

You both have busy working schedules, how hard was it fitting training into your day to day lives?

Vanessa: It was extremely challenging, both emotionally and physically. I found it hard being away Monday to Friday, which meant we had very little time to practice together. Learning a routine in a cramped hotel room = stubbed toes!

Paul: With Vanessa travelling all week for work, it was hard enough to get some quality time by having dinner together on Skype. But try actually practicing a dance routine on Skype with Vanessa in her hotel room and me in our living room….you get the idea of how hard it is!

What have your colleagues said about you appearing in the show?

Vanessa: I didn’t say much to my colleagues about the show while we were filming. Now that ads for the show are on air, colleagues are surprised to learn of my double life – business strategy consultant by day and ballroom dancer by weekend!

Paul: Actually I kept it fairly low key at work during the filming. But somehow word got around. I was  surprised by how many people came up to me and shared their own latin and ballroom dance class experiences. I may not be the first engineering consultant to take up dancing, but I’m definitely the first among my colleagues to be dancing on TV!

How much dance training did you both have before participating in the show?

Vanessa: Not much, I had been taking a few classes with Paul as a way for us to spend time together and have a semblance of work/life balance. The classes were casual and a bit of fun.

Paul: Being the only one in my family who couldn’t dance, I made myself go to classes so I wouldn’t be out of place at social functions. When I met Vanessa, I’d already been going to classes for a couple of years, but never tried to compete.

Do you go dancing anywhere in particular in your local area?

When we’re not training for competitions, with Pauline, we regularly go to Eric and Helia’s dance class over at St Bonaventure’s Social Club, as it’s a great supportive crowd to learn and socialise with. And we do the occasional Friday night social dance at the Greenway Centre in Southmead, as there’s always a good crowd up for a good time on the dance floor. Usually, when we’re not having classes, a fellow enthusiast and competition level dancer, Toby Lewis sets up informal practice sessions in Henleaze and helps us with some pointers. But really the Greenway social dances are the closest thing to a ‘club’ we go to.

What was your favourite dance you had to learn on the show? Why?

Vanessa: That is a difficult question as we learnt so much about all the dances during the show. Overall, our dancing game has seriously improved since the show. If I had to pick it would be the tango, because the intensity and passion of the dance is fantastic…but mainly because Paul’s ‘tango face’ is so cute!

Paul: I really like the quickstep. It puts me in mind of a golden age – sharp suits, elegant gowns, glittering soirées and scintillating conversation…you get the idea. The quickstep exudes glamour.

What was the hardest dance to learn?

Vanessa: Definitely the jive. At home, we have a version of the jive that I have been dancing since I was a child, the version I learnt from my parents who are beautiful dancers themselves. So when we had to learn the jive for the competition it was like starting from a blank page and that was hard to do.

Paul: The cha-cha-cha for sure. How on earth Pauline got me to sway my hips, I’ll never know!