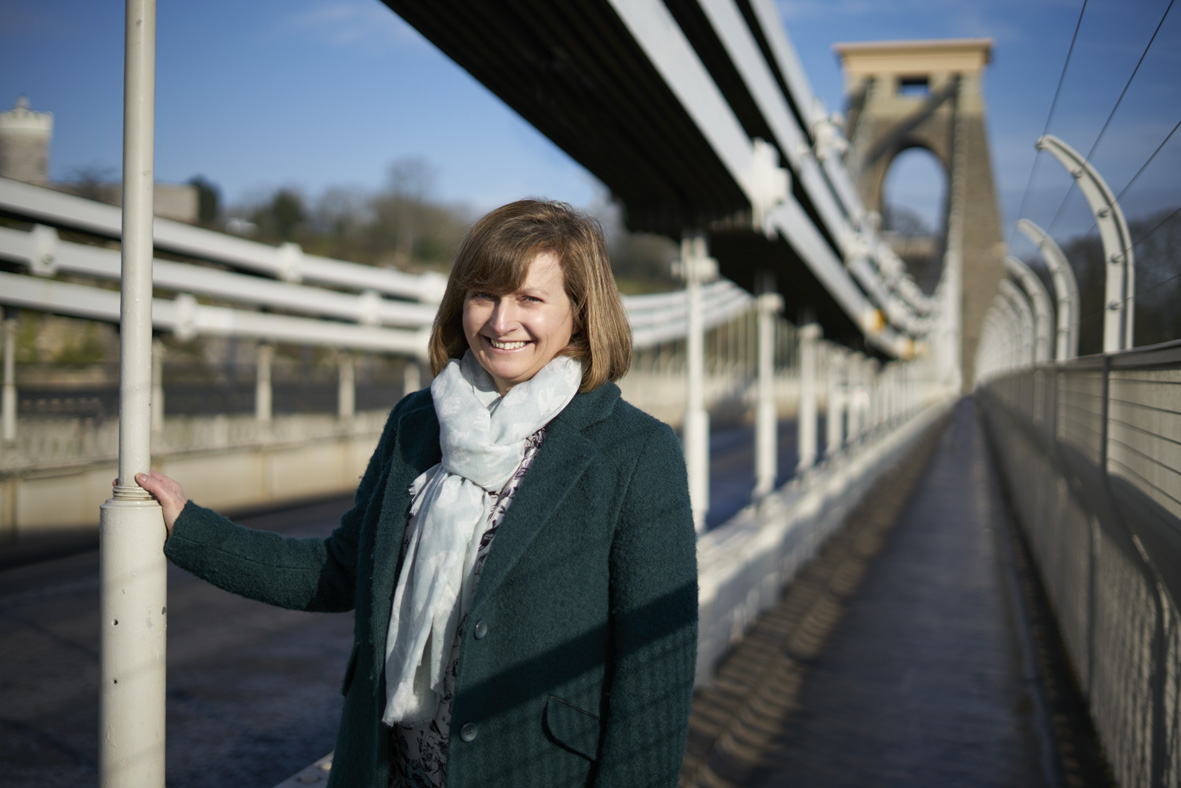 Before being appointed bridge master at Clifton Suspension Bridge late last year, engineer Trish Johnson had her hands full as the head of maintenance for Severn River Crossing, managing the upkeep of the two Severn bridges – having previously worked with local authority projects on everything from bridge inspections to major road schemes, the building of a bomb-proof bunker to the design of an aqueduct.

And so far, she seems pleased with the move. “It’s pretty much the best job ever,” she says, beaming. “It is such a unique role and to have the opportunity to manage such an important, iconic structure in Bristol is a real honour. I am really privileged to be working with a great team of people, who are passionate about the bridge, and no two days are ever the same.”

TBM: How so? Describe a typical shift for you…

Trish: The role combines maintenance of the structure, dealing with the public, promoting engineering, the management of the business and looking after our heritage. So a typical day might include agreeing the maintenance, or managing our various contractors, who look after everything from the toll barriers to the lighting on the bridge. Then,

I may deal with media who want to film on the bridge; pop into the visitor centre to say hello to our fantastic volunteers; deal with the usual invoices, reports and so on, and then walk round the bridge to ensure everything looks in order, while catching up with our attendants. On top of that, there are the major projects that we are carrying out including painting under the bridge and planning new Toll Houses, so there’s plenty of report reading and meetings.

What does the bridge mean to you?

I have been in Bristol for over 25 years so it is a place close to my heart. All bridges are about connecting communities and this one is no different. Its location, high above the gorge and overlooking the city, gives it a touch of grandeur. It really is the icon for Bristol. For me, it is a bridge that shows off our heritage and engineering background but also inspires the future engineer, scientist or architect. We have lots of school groups who visit the bridge and Visitor Centre and hopefully leave being excited about the applications of science and engineering.

What do you love about working in this area of Bristol?

Who doesn’t like Clifton? It is a real hub of activity and the architecture is beautiful – you can imagine the Victorians walking through on their way to the bridge. The village is great to grab a sandwich from and the views from the bridge are second to none.

Where’s your next favourite spot in the city?

Brunel’s Buttery down by the docks. This has been a family favourite for years and we are regulars there. Best bacon butties in Bristol!

Well a lot of people don’t know that this is actually a private bridge, owned and managed by the Trust – a very experienced board of trustees. We do not get any funding from any local authority – the tolls pay for the maintenance and upkeep of the bridge. And although it is known as Brunel’s Bridge, Brunel actually died prior to the bridge being completed. It stood for a long time with just the two towers either side of the gorge and was completed by Hawkshaw and Barlow – two eminent civil engineers whose names appear on the inscription on the Clifton tower. I also like the story about the Royal Zanettos – a troupe of Japanese juggler brothers who performed with fire clubs while riding bicycles. To promote their Bristol show at the People’s Palace in February 1896, the Zanettos arranged a well-attended public display at the Suspension Bridge. A turnip was thrown off the bridge and the eldest brother, who was stood on the Portway below, caught it in his mouth with an L-shaped fork – despite losing a tooth or two, according to reports, due to the force of the impact.

The vaults recently opened for a theatre production by Insane Root – do you think performances there will be a regular thing?

I am not sure Brunel ever thought that his vaults would one day be used for theatre. Orpheus & Eurydice was based in the Underworld, so the vaults provided the perfect backdrop for it. I did manage to see it and it was great – the acoustics inside the vaults are fantastic and the actors were amazing. As for more regular shows – we will have to wait and see. The capacity for an audience is very small (12 maximum) so it is not really geared up for your normal theatre productions.

This year we will be painting the girders on one half of the bridge. This is to ensure the ironwork is protected from corrosion. We only paint one half at a time as we need to take the footway up to paint the tops of the girders. So the footway on the south of the bridge (facing Bristol) will be closed for a number of months (now until August) while we do this work from the gantry. This will ensure the girders are corrosion-free for many years to come.

Do you feel your appointment reflects the strides that have been made in what has been a historically male-dominated industry?

It still surprises me that in this modern day this is still considered a ‘male-dominated’ industry. Engineering is all about solving problems, managing workloads and coming up with new ideas on how to do things – something that should excite both men and women. It is a shame that there are so few women in the industry and if my appointment inspires some girls to go into engineering then I am delighted. I have never doubted that this was the best career for me and I love the variety and challenges it brings.