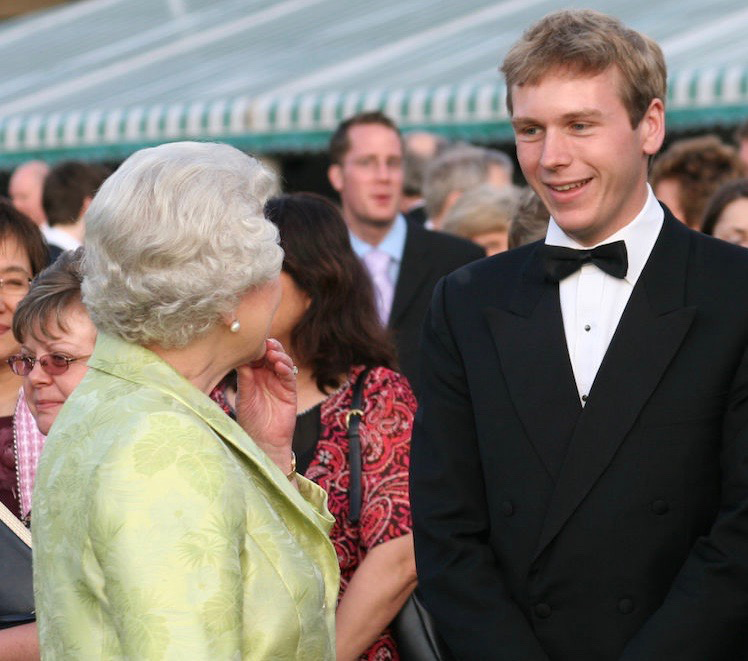 According to Grant Harrold’s parents, he resolved from a young age to, one day, either work for the royal family or marry into it. But since Airdrie, the small Scottish town near Glasgow where he was born, was a good few hours from Balmoral – meaning little chance of bumping into a romantic interest around the royal holiday home – it was the first route that Grant opted for.

“It was seeing The Remains of The Day that caused me to consider a career as a butler,” recalls Grant. “When I left Airdrie at 17, I moved to Dalwhinnie in the Highlands, where my mother started working on the local estate, Ben Alder Estate. One summer, when the family brought their butlers with them, I was given the opportunity to work in the housekeeping department and within a few weeks I was offered a permanent position as the under-butler. I started the day after the Princess of Wales died and decided I wanted to become a butler for HRH The Prince of Wales.”

“…I realised I was about to meet one of the most famous people in the world, someone who I have admired and respected my whole life…”

Little did Grant realise, he would complete this ambition within just seven years. “It was a life-changing position,” he says. “I remember when I found out, after six months of interviews, that I was going to meet them at Clarence House. I was nervous beyond belief, and excited. When I arrived there, in March 2004, I remember being taken to a room to wait – and in that room was a picture of the Prince as a young man, which did not help with the nerves as I realised I was about to meet one of the most famous people in the world, someone who I have admired and respected my whole life. We spoke for around half an hour and once we were finished, he asked me if I really would like to work for him, to which I replied that I would be honoured, and within a few days, I got an email – while working at Woburn Abbey for the fantastic Bedford family – offering me a position with the royal household.” Grant gives a masterclass in Australia this summer for Stayz

Nowadays, Grant has his own business, Nicholas Veitch Ltd, based in Almondsbury, with fellow tutor HRH Princess Katarina – cousin to HRH Prince William, Duke of Cambridge – running all sorts of etiquette classes for clients from all over the UK, who attend classes in various locations including Blenheim Palace and The Ritz. “At Thornbury Castle, for example, we offer talks including the dos and don’ts when meeting royals, followed by a full afternoon tea; wedding etiquette talks; and black tie three-course dinner parties where we keep guests informed throughout the night on how to behave at such events, including the correct way to dine at the table,” explains Grant. “They’re popular with businesses that want an unusual team-building day or Christmas party, and with those who want to buy an unusual gift for a friend.”

“One minute I’m teaching royals or VIPs the correct way to entertain, then the next I’m off to film for Good Morning Britain in Cheshire…”

It’s a job that takes him all over the place – this year has already seen him on ITV’s This Morning; teaching Jerry Springer and Lisa Faulkner royal etiquette on Channel 5’s The Breakfast Show; and working on a high profile campaign in Australia with holiday rentals company Stayz. At the moment, Grant is also launching a new YouTube series called the Royal Butler’s Etiquette Guide, which starts with dining, shoe cleaning and simply opening a bottle of champagne.

“One minute I’m teaching royals or VIPs the correct way to entertain, then the next I’m off to film for Good Morning Britain in Cheshire, catching a plane to the other side of the world or organising a royal event for HRH Princess Katarina,” he says. “I couldn’t have asked for a more fun and rewarding position. Of course, I do miss working directly for the Prince of Wales but I love running my own company, offering these unique talks, classes and workshops and working with the most impressive venues as well as a wonderful team of people. There isn’t one day I don’t consider how lucky I am.”

It hasn’t always been such plain sailing, though. “When I started working at Woburn Abbey, I was very nervous as I knew the family well from the TV series Country House. The nerves were a problem – I remember serving the family and their guests one lunchtime and I had the shakes. The cups and saucers were rattling very loudly – it was awful – and the more I tried to be quiet, the louder they seemed to get. I will never forget how glad I was when I put the last one down. It is such a silly thing but something I remember to this day. I am pleased to say those nervous days have long gone but they were a valuable part of the learning process.”

We’re glad to hear Grant – who can often be found picking up a bargain at St Nicholas Market or wandering Clifton and popping into the South African butcher’s for biltong and boerewors with his dachshunds in his spare time – thinks we Bristolians have pretty good manners on the whole. Though there’s still room for improvement… “I love the Bristol Hippodrome; it’s a joy to be in such a beautiful building,” he says. “However the etiquette side of me came out last time I visited – people were using mobile phones and other devices, and rustling sweets and crisp packets during the performance. I also noticed people didn’t know which part of the arm rests to use. This prompted me to write a blog on etiquette of the theatre!

“I love the Bristol Hippodrome; it’s a joy to be in such a beautiful building…”

“But I hasten to add it’s not just Bristol – we live in a very different age to our grandparents and of course, things change, but I feel it’s important not to lose our traditions, manners and respect for others and we must always bear this in mind during our day-to-day tasks where ever we are. Take driving, for example. Why do we forget our manners and how to be civil to each other as soon as we get into our tin boxes? There is etiquette when it comes to roundabouts and junctions so we ought to show a bit more respect to each other and remember that the person we’re being rude to could easily be our future boss or perhaps even father-in-law!

“One of my favourite old rules of etiquette is that if you suddenly died and therefore could not attend a dinner or lunch, then you should send your executor! I love the thought that you couldn’t be so rude as to leave your space empty due to all the work your host went to make their event a success. (Note: executor not executioner – this caused some confusion when I brought it up on Twitter recently!) But if the hostess has done the table plan, laid the table and bought the food, and you decide to shuffle off this earthly coil, is it not polite to send one’s executor?”

“Trust and loyalty is a two-way thing – if you give and receive it, then you create a unique bond that should
never be broken…”

So, we wonder, what’s the most important, the golden rule in his butlering handbook? “For me, it’s trust and loyalty,” says Grant. “It’s vital to your employer and their household because you do not wish to have anyone discussing private matters with the rest of the world. Trust and loyalty is a two-way thing – if you give and receive it, then you create a unique bond that should never be broken. When I train my butlers, we cover this on day one before we go any further, as I want them to understand this first and foremost. If they have any issues with this then I advise them to consider another role. Households do understand that when you are proud to be working for someone, you can express this and discuss your fun, off-duty experiences; however there will be things that only you and the employer are privy to, and these must go with you to the grave.”

Previous
The Kenny to get Michelin-star treatment