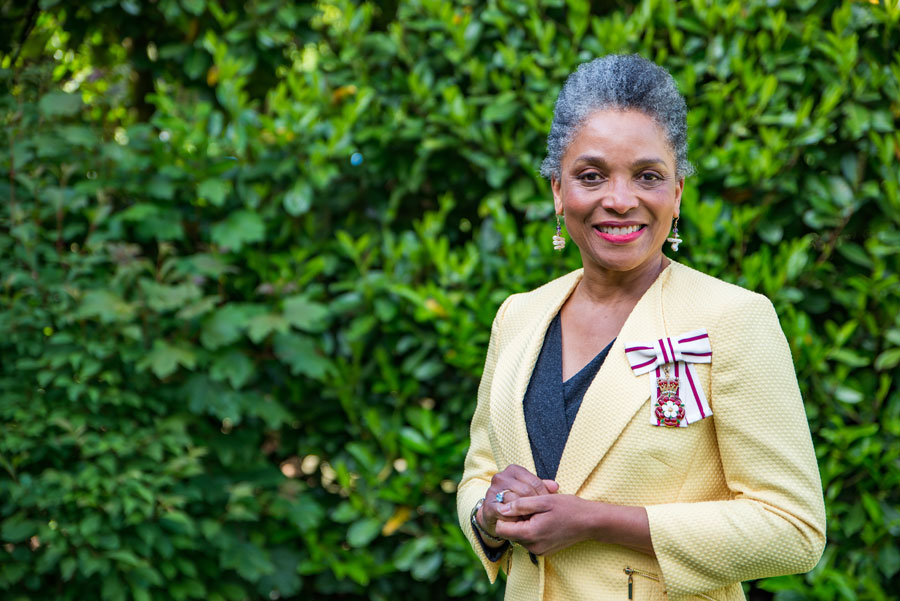 Peaches Golding is the first black female in the country to have been appointed a Lord-Lieutenant – but that in no way defines, or confines, her

Zoologist, bastion of local business, member of the Chartered Institute of Marketing, former high sheriff, chair of the Bristol Water Challenge Panel, school governor, and trustee of the ss Great Britain and plenty more besides, Peaches Golding is undoubtedly more than qualified for the important new role she has undertaken – as Lord-Lieutenant of the city of Bristol. As well as the historic job and all it means, we wanted to find out a little more about Peaches as a person, so that’s exactly what we did…

TBM: So what exactly does the new job entail?

I am the Queen’s personal representative in this county. My main responsibility is to maintain the dignity of the crown. Most significant is arranging and escorting royal visits to Bristol; representing the Queen during the presentation of medals and other awards; assessing nominations for national honours; participating in the civic, social, military, community, business and professional life of Bristol through attending events and activities and by holding a number of patronages of voluntary, charitable and community organisations.

What does this position mean to you?

I am thrilled and remain greatly humbled by the appointment. I have received an avalanche of cards, letters, emails and contact on social media that has encouraged me greatly. It is an enormous privilege to represent the Queen, and to reflect the spirit, diversity and enterprise of the people of Bristol back to the royal family. I have lived and worked in Bristol, a city I dearly love, since the early 1980s, and I now have an opportunity to highlight those who are addressing challenges, shine light on excellence and do good in industrial quantities!

How have historic roles, such as High Sheriff and Lord-Lt, changed?

The high sheriff is an ancient role, stretching back over 1,000 years when power resided with either the king, the church or, for secular matters, the high sheriff. It ensured law and order, dispensed justice (including capital punishments), imposed and collected taxes, and formed the king’s militia and army. The office of Lord-lieutenant was created during the reign of Henry VIII. The modern-day High Sheriff is now in office for one year only and retains duties associated with the Crown Court although the role is mostly ceremonial, while the Lord-Lieutenant remains in office until his or her 75th birthday, has day-to-day responsibilities in the county and is much more concerned with ensuring there is a good atmosphere and relationships. The Queen likes her Lord-Lieutenants to serve between 10 and 15 years.

What qualities should a potential representative of the Queen have?

A potential nominee should have a knowledge and understanding of the whole county and the challenges it may face; be a clear communicator; command the respect of one’s peers; relate to people at all levels and maintain tact, discretion and confidentiality.

Tell us a bit about your background…

I graduated from the University of North Carolina – a zoologist by training. However, my business background is diverse. When I worked in the Economic Development Office of Bristol City Council, I was involved in escorting the Japanese ambassador during his visit; I introduced the vice-chancellor of UWE to business leaders; and I dealt with the inward investment of Lloyds Bank, Hewlett-Packard and DuPont. In 1992 I set up a marketing and communications business after several years leading the Aluminium Can Recycling Association. I was also a member of the group that won the franchise for GWR Independent Radio and I have held a number of board-level appointments; including HTV Independent Television and its successor ITV West and West Country; the governing body of UWE; North Bristol NHS Hospital Trust and Avon & Wiltshire Mental Health Partnership NHS Trust. In 2009 I was awarded the OBE, and in 2010 awarded the Masters of Business Administration from UWE.

We hear your family was active in the civil rights movement?

My father was not so much a civil rights activist as one who knew his self-worth and the law. He was a veteran of the D-Day landings, university professor and elected member of the North Carolina General Assembly. However, in 1947 he successfully challenged Greyhound Bus when they broke the law by demanding that he sat at the back of the bus. His law suit was settled and he was awarded damages of $2,000. He used the money to buy a car so that he would never have to ride the buses again and he also gave a large donation to our church.

When did you move from North Carolina?

When I graduated from the University of North Carolina in 1976, I went to Nigeria, in west Africa. I carried out lab work for students studying zoology at the University of Ibadan and then taught at secondary school in Loyola College, Ibadan.

What are your favourite memories of the place as a child?

My upbringing was very middle class. My elder sister and I enjoyed the long, hot North Carolina summers punctuated by family holidays in our mobile home or by afternoons spent at a nearby lake in our power boat, when I was probably water skiing. As both my parents worked in education, summer provided an opportunity to travel far and wide. My parents would invite one or more of my friends along, so there were always songs, cooking, giggles, lots of games and sports. We attended Expo 67 in Montreal, explored northern Mexico and the American Mid-West, camped in the mountains and along the unspoilt coastline of North Carolina. These holidays, as well as trips to places where history was being made, gave me a sense of wonder and curiosity concerning the world we live in and regarding the different people who inhabit it. It has also aided my ability to communicate effectively with people of all types and in a variety of situations.

“I always had high aspirations…My mother says my first interest was in being an astronaut, and I must admit I would still relish the opportunity to orbit the earth”

Did you ever imagine the kind of roles you would hold as an adult?

I always had high aspirations and was encouraged to follow my interests. My mother says my first interest was in being an astronaut, and I must admit I would still relish the opportunity to orbit the earth. Then my interests turned towards becoming a paediatrician. However, in my Year Four ‘book of dreams’ project, I wrote that I would become the first female US president. I guess there’s still time for this to happen!

Any pearls of wisdom for us?

I am interested in listening to and understanding other people’s perspectives and in seeking peace and harmony. Martin Luther King once said, “People do not create history, history creates people.” The differences between an old-world and a new-world country are evident in how each nation addresses opportunities, challenges and situations.

Why did you choose Bristol as a place to settle?

Bristol is the home of my beloved husband and we chose to live and raise our son here. I met Bob when he was the director of the zoological garden at the University of Ibadan, Nigeria. We share a common interest in snakes. Bristol is such a vibrant city, the mix of buildings, ranging from medieval to modern, create beautiful streetscapes; creativity oozes from museums, clubs and workplaces; the ecology for businesses is fertile; there is great pride in our open spaces and diverse neighbourhoods. We encourage success and welcome talent.

What will you be focusing on as part of your new role?

I am keen to build upon the enormous interest in the lieutenancy expressed by many Bristolians and the media. I will be revising our website, using social media to inform people of what the lieutenancy is doing, and looking at the skills and experience gaps among the Deputy Lieutenants as I seek to appoint new ones when the existing ones retire. I am examining how I can work better with businesses and the voluntary sector to promote the Queen’s Awards and identify where we can recognise excellence. While I am keen to modernise aspects of the lieutenancy, I value tradition. Much of our tradition makes us the great city and nation that we are; it gives cause for unity and celebration – creating stories we pass from generation to generation.

What are you looking forward to in Bristol this summer?

My diary contains a range of business, religious, health, social and voluntary sector engagements. Highlights include several royal visits, and I hope HMS Hurworth will be here during Harbour Festival.

Next
Travel: Hip to be in Hamburg
Start typing to see results or hit ESC to close
bristol history nightlife music venue area 404
See all results