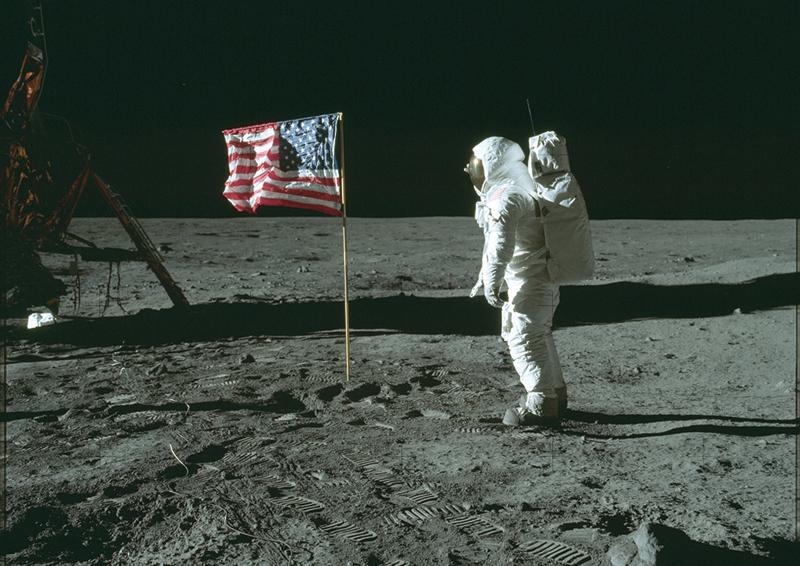 Celebrating 50 years – Space Steps: The Moon and Beyond at Royal Photographic Society

This month the Royal Photographic Society reflects on that massive, magical milestone for mankind, back in the summer of ‘69…

Etched into the memories of many is the moment man first set foot on the moon. On 20 July 1969, astronauts Neil Armstrong and Edwin ‘Buzz’ Aldrin became the first to feel its surface beneath their boots, and this month, the 50th anniversary of this seminal moment in human history, The Royal Photographic Society is hosting ‘Space Steps: The Moon and Beyond’ to commemorate the milestone, and one of humankind’s most extraordinary adventures.

The exhibition has been curated by Deborah Ireland, whose recent book Hasselblad and the Moon Landing explores the relationship between photography and space. “The 1969 moon landing was the culmination of nearly 10 years of sustained effort by NASA,” she says. “For those who saw those first pictures it was a momentous occasion, inspiring the general public and a new generation of scientists. Some 50 years later, man is embarking on a new era of space exploration to the moon, Mars and beyond which is already exciting people today.”

…It traces the story of the Mercury and Gemini missions and the Apollo programme, paying tribute to the crucial role that women played…

‘Space Steps’ aims to remind people of that journey and the excitement that the Apollo 11 mission generated and to look into the future. Expect some of the most remarkable images captured on film, illustrating and tracing the story of the earlier Mercury and Gemini missions and the Apollo programme up to 1969, also paying tribute to the crucial role women played in the space programme.

Recognising the importance of space exploration today, ‘Space Steps’ will also feature an interactive installation by photographer Monica Alcazar-Duarte, exploring how scientists working in facilities across Europe are engaging in a new space race. Visitors can also see very rare cameras associated with the moon landings; including the Hasselblad HDC (5 – 7 July) lent by Hasselblad AB, Sweden, as part of its only UK showing.

“This Hasselblad was selected by astronaut Wally Schirra for his flight on Mercury-Atlas 8,” says film producer Keith Haviland. “It took the first high-quality photographs from Earth’s orbit, showing images of a single, fragile planet without borders. Such images had a profound effect on the astronauts and people back on Earth.”

We found out more about the show from curator Deborah Ireland…

Do you remember watching the moon landing?

I think I watched a recording the following day with the whole family. It was very exciting and seemed incredible.

How did Mercury and Gemini influence the Apollo programme?

Both were critical to its success. Project Mercury was the first human space flight programme and had three clear objectives; to orbit a manned spacecraft around Earth, investigate man’s ability to function in space and recover both man and spacecraft safely. Initiated in 1958 and lasting nearly five years, it achieved all its goals including six manned space flights. Project Gemini was an Earth orbiting programme designed to test the equipment and skills needed by astronauts and ground crew to land a man successfully on the moon. It had four main objectives; to test an astronaut’s ability to fly long-duration missions (up to two weeks in space); to understand how spacecraft could rendezvous and dock in orbit around the Earth and the moon; to perfect re-entry and landing methods; and further understand the effects of longer space flights on astronauts.

How did women play a part in the space programme?

Many women contributed to the success of the moon landing, from welding specialists to computer programmers; they made invaluable, but often hidden contributions. Nancy Grace Roman became NASA’s first chief of astronomy in 1961 and would become the first woman to hold an executive position at NASA. She had oversight for the planning and development of programmes including the Cosmic Background Explorer and the Hubble space telescope. She discovered that stars in circular orbits with more heavy elements are younger than those with random orbits and fewer heavy elements.

Margaret Hamilton played a remarkable role in the story of Apollo 11 and the history of computer programming. She coined the term ‘software’ and led the team that developed the first flight guidance and navigation system for the Apollo spacecraft. The guidance software was so reliable it was used on all the Apollo missions, Skylab and the Space Shuttle. Meanwhile Margaret W. ‘Hap’ Brennecke was the first female welding engineer to work in the Materials and Processes Laboratory at NASA’s Marshall Space Flight Center. She was a trailblazer in the field of aluminum alloys, critical to the success of the Apollo programme. Brennecke was asked by NASA to make decisions on the selection of lightweight high-strength metals and welding techniques for the huge Saturn rocket stages of Apollo 11.

Joann Morgan was the only woman working the prime shift in launch control when Apollo 11 lifted off in 1969. Her role was to monitor the loading of the rocket with liquid hydrogen and oxygen, but being chosen for the prime shift meant she managed the instrumentation team feeding back reports. Morgan would work 45 years with NASA on Skylab and Apollo Soyuz missions.

Dorothy Vaughan began her career in Langley Memorial Aeronautical Laboratory, National Advisory Committee for Aeronautics, in 1943, to help the war effort. She was assigned to the segregated West Area Computing unit and in 1949 was promoted to lead the group, becoming one of the few women supervisors. In 1958, when the NACA made the transition to NASA, segregated facilities, including the West Computing office, were abolished. Vaughan was both a respected mathematician and became NASA’s first African-American manager. Her contribution was the selection and promotion of other women for key computing roles.

Katherine Johnson did trajectory analysis for Alan Shepard’s Mercury 7 flight in 1961 and John Glenn asked her to check the figures for his first orbital flight in 1962. Her calculations helped synch Project Apollo’s Lunar Lander with the moon-orbiting Command and Service Module. She also worked on the Space Shuttle and the Earth Resources Satellite, and authored or coauthored 26 research reports.

How far has space photography come since 1969?

A long way; the images captured by the Hubble telescope are astounding. A NASA image release on 22 April 2010 shows a small portion of one of the largest seen star-birth regions in the galaxy, the Carina Nebula. Towers of cool hydrogen laced with dust rise from the wall of the nebula. It’s a spectacular image. The Rosetta mission launched in 2004, arriving at comet 67P/Churyumov-Gerasimenko on 6 August 2014. This was the first mission in history to rendezvous with a comet and escort it as it orbited the sun. On 4 November 2014 a smaller lander named Philae was deployed from Rosetta and touched down on the comet. Philae obtained the first images taken from a comet’s surface and sent back valuable scientific data.

Previous
Anyone for real tennis?