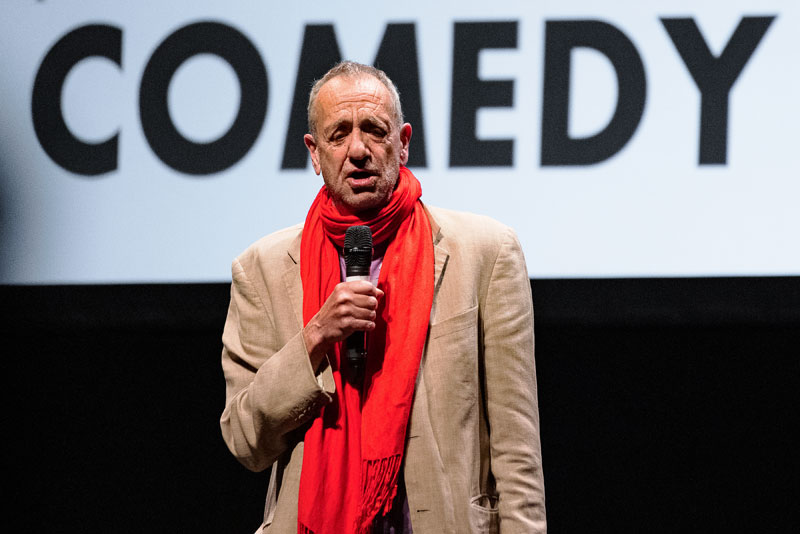 As comedian Arthur Smith prepares for his debut performance at the Slapstick Festival on 30 January, we catch up with the man himself to talk about his latest show, his favourite comedy duo, and his advice for aspiring comedians.

What originally led you to comedy and how did it all begin?
As a nine-year-old I played macho-baddy Captain Hook in the school production of Peter Pan. My big entrance, snarling and brandishing my coat hanger-hook, frightened the fairy girls and squaws on stage but produced big laughs in the audience. I left the stage and began to terrorise individual spectators. More laughs. It felt very fine indeed.

Could you tell us more about your latest show, Laughs, Stories, a Song and a Poem?
Yes I could. There will be jokes, songs, poems, slapstick and observations about the ridiculous business of being alive.

Slapstick Festival celebrates silent and visual comedy and keeps it alive for future generations to enjoy. Who is your all-time favourite slapstick comedian?
I have adored Laurel and Hardy since I saw them on our first telly when I was 10. Also, when I lived in Paris for a year I really appreciated Jacques Tati.

Where do you find inspiration for writing and standup? What drives you?
I buy my inspiration from a shop in Balham and I am driven by the pleasure in making the laughter sound and getting paid for it.

Was lockdown a creative time for you?
Alas, not really. A fug of misery descended some days and I became a senior member of the CBA movement (CBA stands for Can’t Be Arsed).

What has had the biggest influence on your writing and comedy throughout your career?
The tree outside the window of the room in which I write.

The alternative comedy generation changed UK standup forever – what was it like to be a part of it and how has comedy writing evolved over the years?
It felt new and exciting – comedy’s punk. Walking on stage to compère the midnight show at the Comedy Store felt like the best thing in the world to be doing.

We loved your imaginary weekends away on Twitter this year – what are your thoughts on social media and do you think it is changing comedy?
On my imaginary weekends away we went to Paris, Madrid, Marrakesh, Rome, Copenhagen, Venice, St Petersburg etc. and the best bits were all the jokes my followers posted. I recognise you can make comedy now without ever going on stage but I am too old and full of CBA to really understand it all. I like Twitter but it can be baffling – all the fury that zings through it. And when someone posts: “My husband died this mornin’”, and it gets a thousand ‘likes’. Eh?

Your stand up show and Radio 4 special, Syd, which details your father’s extraordinary life, his time in Al Alamein and Colditz, and his career as a policeman on the streets of post-war London was incredibly moving – how has it been retelling his stories?
It’s intense, enjoyable and it somehow reconnects me with my dear Dad.

When you look back at your career, which pieces of work stand out as highlights?
My play An evening with Gary Lineker, which ran in the West End for several years, but even better have been some of the outdoor walking tours I have done over the years. Some truly ludicrous and unique moments (and that time I got arrested at the end of one of them).

What do you know now that you wish you knew when you started in standup? Have you got any advice for aspiring comedians?
The older I get I find the less I know. To new standups I would say – find your own voice and get as much stage time as you can.

Who is one to watch on the comedy scene at the moment?
Jo Lycett is brilliant; and a name you may come to know – Alexandra Haddow.

Are you able to tell us about anything you are currently working on? What can we look forward to in 2022?
I’m writing a show where I take the audience away on an imaginary trip to Paris AND teach them French. Ca sera sans pareil (it will be unparalleled).

Arthur Smith will be at St George’s Bristol on 30 January. See the full programme and book your tickets at: slapstick.org.uk