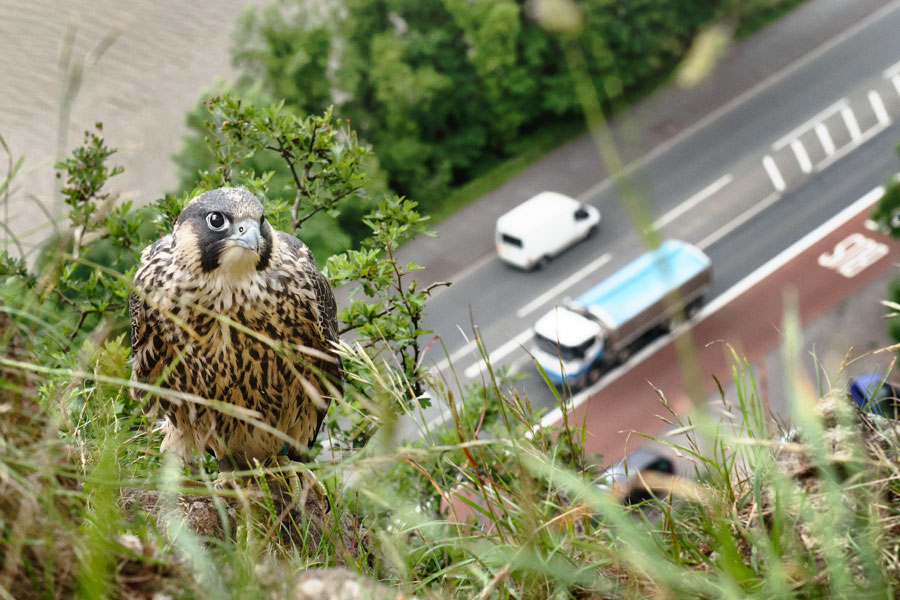 In the first of our new ‘Wild Bristol’ series, Pete Dommett meets a Bristol photographer and peregrine addict…

“Snipe…pigeon…teal…pigeon…skylark…” Head down, Sam recites a roll call of species as he picks through the feathers, legs and other bits of bird that litter the bottom of Castlemead tower in Cabot Circus. After several minutes, he looks up. “I’ve got a whole woodcock head in the freezer at home,” he tells me with unrestrained glee and the look of a man who’s very clearly got an obsession.

Sam Hobson is a Bristol-based wildlife photographer and a self-confessed peregrine addict. Peregrine falcons – the fastest bird on the planet – live right here in the commercial heart of the city and Sam is showing me the proof. The prey remains that he’s collecting from between the feet of people hurrying to work are clear evidence of their existence, but wait – snipe, skylark and woodcock? Surely these are birds of the countryside and not usually found on city streets.

“You’re right,” confirms Sam. “But they do migrate over urban areas at night.” He explains that these birds are ‘counter-camouflaged’ – basically, brown on top and white underneath. While this helps them evade predators during the day, it means that when the birds are flying over Bristol in the small hours, they’re lit up from underneath by the city’s lights like a late-night takeaway.

Peregrines have altered their behaviour to hunt at night and exploit this unexpected source of food. It’s another indication of how well these raptors have adapted to city living. Since narrowly avoiding extinction in the ’60s due to persecution and poisoning, peregrines have bounced back, especially in the urban environment. In fact, they’ve become the kings and queens of the concrete jungle, swapping traditional nest sites on coastal cliffs and mountains for high-rise city structures like office blocks, mobile-phone masts, shopping centres, football stadiums and cathedrals. There are now around 100 pairs breeding in British towns and cities, with over 30 pairs in London alone. Bristol has at least four, including a pair here in the city-centre and the well-watched duo in the Avon Gorge that you can see from the Peregrine Viewpoint on The Downs.

Sam and I walk to the nearby multi-storey car park and take a lift to the very top. With its steel, glass and minimalist style, this is über-urban birding. The Castlemead building is easy to see from here – at 80 metres, it’s the tallest tower block in Bristol – and it doesn’t take Sam long to spot a peregrine.  It’s the male, or tiercel, perched on a concrete window ledge like an excommunicated gargoyle. We watch it shredding yet another pigeon, the downy feathers drifting onto unwary commuters below like wedding day confetti. I got married down there, almost 20 years ago, at Bristol Registry Office in Quakers Friars – now home to Brasserie Blanc. As we watch the falcon tucking into his breakfast, Sam recounts an urban peregrine myth.

This month, young peregrines are learning how to find food for themselves. Adult birds help them hone their hunting skills by flying high with a prey item, then dropping it for their offspring to catch.  Except that this doesn’t always go to plan. Apparently, a diner at Raymond’s restaurant was enjoying an alfresco lunch when a partially dismembered pigeon (that she hadn’t ordered) fell from above and landed on her plate.  Bon appétit, madame…

Photography by Sam Hobson; see more of his work at samhobson.co.uk

Next
Food For Thought: Grow Your Own
Start typing to see results or hit ESC to close
bristol gender film history tv
See all results