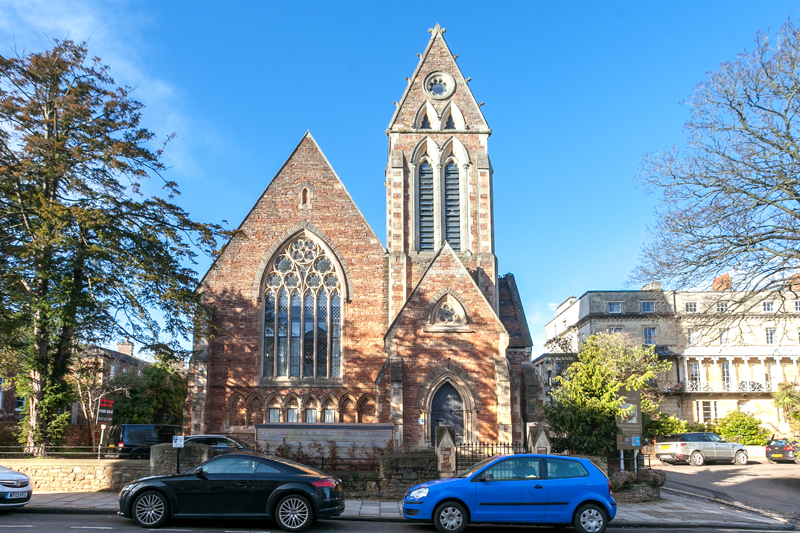 They’re few and far between, says Serena Ralston, but wouldn’t it be a dream to live in one of the beautiful old churches being transformed into residential properties?

Chapel conversions can make for divine living spaces indeed. Original features often include thick stone walls, beautiful stonemasonry and intricate woodwork that are rarely seen in other Bristol homes. And if you are aspiring to a spectacular view, where better than from a church spire apartment?

“When tastefully converted, a church conversion can offer modern and original living in a period building, with distinctive architectural features, that is established in its location,” says Charles Zorab of Richard Harding Estate Agents. Letting agent Pete Reeves agrees. Not only does he own a rental apartment in the Kersteman Quarter, a converted chapel in Redland, but he also owns and lives in a house across the road in The Cloisters, a large Victorian church converted into seven houses. Pete and his family were among the first residents to move into the Cranbrook Road property 11 years ago.

“What we love is that our home is completely unique,” he says. “It has amazing space – two of the rooms are 20 by 30ft with ceilings 30ft in height – and we enjoy stained glass, stone columns and carved cherubs.”

Only two properties have been sold on since The Cloisters first launched and it’s popular with film crews too – Reeves’ home was a location for the E4 TV series Crazyhead.

Bristol experienced a boom in church-building in the late Victorian and Edwardian periods as its population grew rapidly. Consequently, many of the local converted churches and chapels date from this period and their build quality is high. 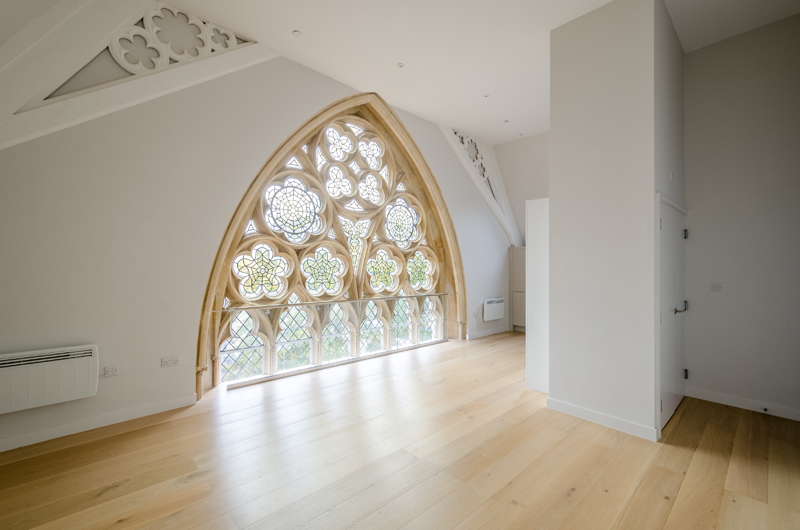 According to the Church of England’s website, around 20 church buildings are closed for worship each year. Although there are currently none in Bristol on its ‘disposal’ list, former churches and chapels in the city are already making great homes. A couple of conversions (read on) are currently on the market. However, these properties are rare and so get snapped up quickly.

Richard Pedlar of Bristol-based Richard Pedlar Architects, and member of the Bristol Civic Society, thinks that converting a church to residential use should be a last resort: “Churches are focal public buildings and one of the only building types that have survived in their original use through many hundreds of years.”

If possible, churches and chapels should be kept in public community use. But if not, these buildings can be sensitively converted into high-quality homes.

Richard points out that early Greek and Roman houses adopted similar forms and layouts to churches. Central spaces that would have been naves in a church were opened up, becoming courtyards with pools and fountains – ideal for warm climates. A reception area offered the entrance into the courtyard with rooms around the edge. Today, the best conversions respect and work with both the constraints and attractions of church buildings.“Churches are often substantial and solid buildings that have been there for many years,” says David Beddoe, of Bristol agents and auctioneers Morgan Beddoe. “They make good conversions into homes.”

David Beddoe handled the sale of the Old Tabernacle in Bedminster in May. The 1920s building, which was being used for offices, has planning permission for residential use and was bought by a developer.

Richard says: “Smaller non-conformist chapels convert well for domestic use if the open spatial form is respected. Galleries and mezzanine floors can avoid the intrusion of a floor across the whole plan and the inevitable division of windows with the give-away domestic clutter and curtains draped against gothic or modern triangular windows.”

Bristol-based Brownfield Green is one of the most established church conversion specialists in the UK and it developed the Kersteman Quarter. “A successful church conversion reimagines the building to work as a home or homes,” says director Kezia Fawcett. “This means a variety of spaces – from large, open-plan areas to more intimate ‘cosy’ rooms. We keep as many original features as we can, while still making sure that it works well as a modern house, and doesn’t feel like living in a church.”

Brownfield Green tries to create houses first, and flats second, in its church conversions because houses work more effectively, with the church split vertically rather than horizontally. 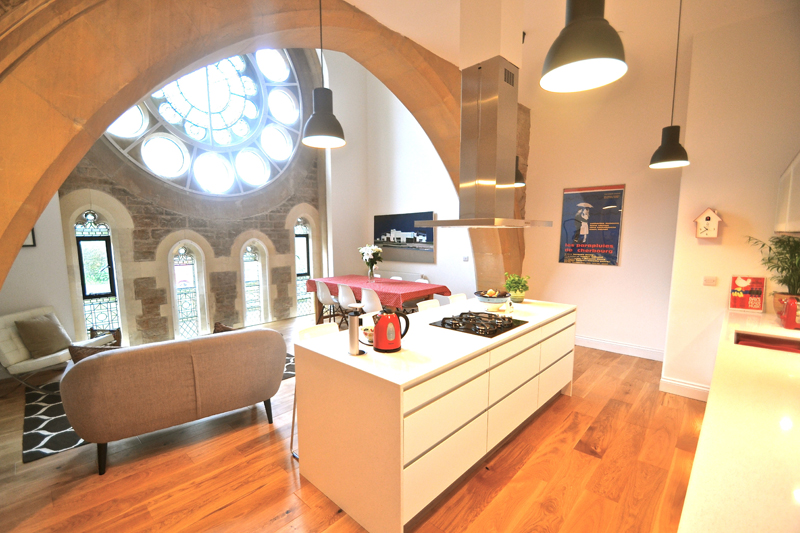 We are big fans of this kitchen in the Kersteman quarter

Good conversions strive to retain original features such as stained glass, roof trusses and stone pillars. “The features are usually repeated all the way through the building which means every house can contain historic features,” continues Kezia. “Sometimes we also create features that enhance the existing building such as glazed screens (instead of walls) to allow an unobstructed view.”

Robin Engley, associate at estate agents Knight Frank, points out that most developers in Bristol will use high-end materials for finishes in church conversions, especially in areas such as Clifton where this is the buyer’s expectation.

Churches are complicated buildings to convert and create significant challenges from planning, building regulations and structural issues. It is essential to have an experienced architect who can handle the project creatively. Church buildings are usually large, open spaces with huge floor-to-ceiling features. Windows are often high up, relatively small and also tall and thin, so views out can be difficult. This influences where internal floors can be added. Gardens and outside space are often limited; Brownfield Green tries to create outdoor space for every home it creates by cutting away some of the roof areas to create roof terraces, for example. 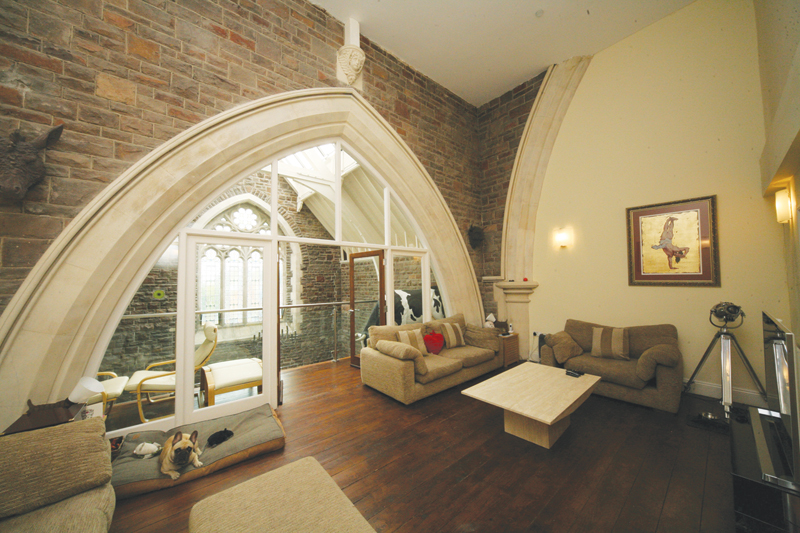 Scenes from The Cloisters. Image courtesy of Pete Reeves

Pete tells us his home in The Cloisters was cold and expensive to heat when the family moved in. But an Aga has proved to be the solution, heating the property very effectively.

In Robin’s view, buyers should be prepared to compromise on the drawbacks and go into the purchase with an eye on the features they might get in a church that they wouldn’t get in a modern house such as high ceilings, stone arches and stained glass.

Church buildings are generally robust and durable. More recent conversions will be subject to scrutiny from building inspectors, development financers and surveyors. Warranty surveyors, who give the green light on a ‘10-year new home warranty’ required of new conversions or new builds, also inspect the property while it is developed. Consequently, buyers should have a reasonable amount of peace of mind.

Routine maintenance will ensure minimal ongoing cost. To avoid issues, interventions in the building should be kept to a minimum, with refined detailing. Large windows and lofty roofs should be insulated.

Despite the challenges, if you are looking for a unique living experience, church and chapel conversions are hard to beat. As Zorab says: “They can offer a wonderful opportunity to live in a property that does not conform to the rest of the market.” Turn the page for more on some of Bristol’s divine homes…

A sensitive conversion of a Victorian church into 16 one, two and three-bedroom apartments. Existing period features sit alongside contemporary interiors to create a stylish finish. Popular with owner occupiers and investors alike, Oakfield Court was offered for sale in phases. In the second phase of five made available, all sold in 24 hours. A four-storey, one-bedroom apartment within the church spire, 16 Oakfield Court, is on the market with Richard Harding at £265,000.

A Victorian church in the French gothic style, converted into several apartments, the Chandos development is located on the doorstep of Chandos Road with its wealth of eateries, including the award-winning Wilsons restaurant. A two double bedroom maisonette was sold in March through Richard Harding.

Developed by Brownfield Green, the Kersteman Quarter in Redland consists of five homes, including two houses with gardens, in a converted Victorian chapel. The chapel was originally built in 1899 and the congregation apparently planned to build a larger church immediately next door. The larger church was never built, leaving unusually large grounds. All the homes have original features which work well with contemporary finishes. Building on its experience of converting historic buildings, Brownfield Green is now concentrating on renovating existing houses.

Across the road from the Kersteman Quarter, this impressive conversion of the Victorian Trinity Church offers seven houses.

A former United Reform Church converted into seven properties, including a bungalow with private garden (on the market with Ocean; offers over £235,000) and apartments.

Featured image: Oakfield Court in Clifton has been popular with owner occupiers and investors alike