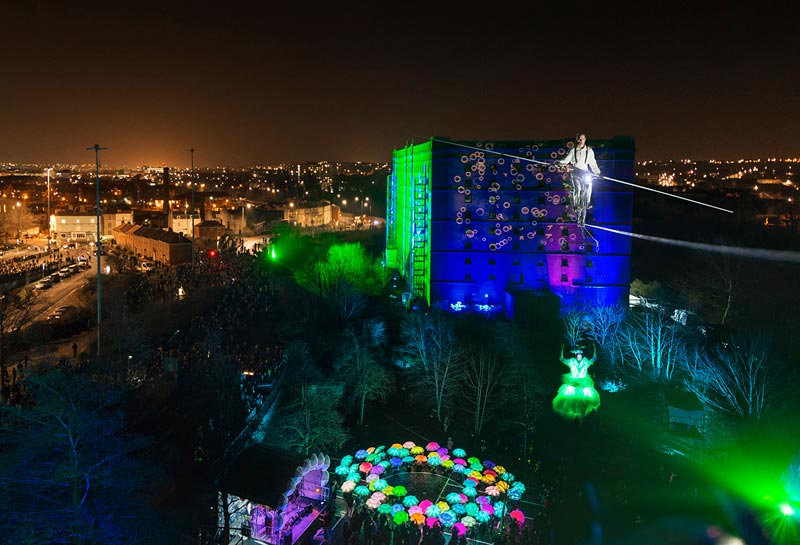 Roll up, roll up! Circus is celebrating its 250th anniversary, and our city – home to more companies than any other in the UK – has been selected as one of six to run a glittering programme of events marking the birth of this British art form. Here our ringmaster, Catherine Pitt, takes us on a journey through the history of the Big Top in Bristol

The year is 1768, and on the north bank of Westminster Bridge, London, a retired cavalry soldier, Philip Astley – resplendent in his scarlet military uniform – rears up his horse, Billy, and draws his sword. He calls out to passers-by to follow him to witness a spectacle so wondrous and thrilling they would never believe their eyes.

Led over the bridge to the open ground beyond, known as Halfpenny Hatch, there the curious crowds gathered, around a rudimentary rope ring measured out in the dirt, to watch this “ring-master’s” display of horse-riding tricks. Astley measured the diameter of this ring as 42 feet (13m) precisely. This was the perfect size to create optimum centrifugal forces needed for him to perform safely and is still the size of traditional circus rings today.

Trick-riding was popular just after the end of the Seven Years War (1756-1763). Ex-soldiers skilled in riding, like Astley, used this to their advantage to earn money by creating thrilling performances that people would pay to see. As more people came to see Astley, he was able to buy his own plot of land and create his own amphitheatre.

What made Astley’s performances different from those of fellow equestrian performers was his decision to add other acts and music to his show. Though acrobats, jugglers and clowns had all existed as separate acts touring the fairgrounds of England, this was the first time that they could be all seen together.

In October 1772 Astley brought his show to Bristol. He roped off an enclosure on Durdham Down, and there it was observed “40 feats of horsemanship…ending with comic burlesque.”

The name ‘circus’, used to describe this melee of performers, wasn’t coined by Astley but by an ex-pupil and rival, Charles Hughes in 1782.

During the early years of circus in Bristol, as with other cities around the UK, shows tended to use large clear sites, such as The Downs, Bedminster and areas of St Paul’s and St Philip’s, where there was space to build a semi-permanent structure. In 1790 Ben Hardy and Thomas Franklin erected “by particular request of several Bristol ladies and gentlemen…a very commodious amphitheatre” in an area called Backfield, behind The Full Moon pub in Stokes Croft. The building was said to have been lavishly decorated to entice the public and to rival local theatres.

In the early years, circuses were seen as a threat to established city theatres, offering entertainment for all classes at affordable prices. In the 18th century, theatres had to buy licences with a patent to allow performances to take place, whereas circuses were exempt. However, a mutual respect developed between the two art forms: on Mondays Bristol’s Theatre Royal would always have performances, but the circus would ensure it did not.

As circuses grew in terms of popularity, so did the buildings created, in terms of size. Vast crowds could be accommodated in venues such as one circus site built in the 1890s off Gloucester Road, that could seat up to 15,000 people. The costs could be huge as well. A 19th-century circus site in Limekiln Lane, Jacob Wells, was funded by public subscription and cost 1,000 guineas (the equivalent of over £1million today).

If sites weren’t available then buildings were found that could be temporarily adapted. In the 20th century, theatres such as the Hippodrome, Colston Hall, and the People’s Palace on Baldwin Street hosted circuses. A drill hall at the top of Park Street was occupied by Hengler’s, Sanger’s and McCollum’s circuses for months at a time.

Winter-time was when circuses with semi-permanent sites were at an advantage. In the summer they could travel easily to other city to hire buildings, but in the winter travel was dangerous. Tented circuses (the Big Top) were introduced to the UK in 1840, when Thomas Cooke brought the idea over from America. Now the possibility of itinerant circuses all over the country was a reality.

The circus was often frowned upon by both clergy and lay people, as theatre had once been. There were concerns about rivalry and possible violence between circus people and locals – the acts in the early years of circus could certainly be quite primitive and crude. In 1833 a Whitsun performance featured one clown who “blew out a candle not with his mouth.” Yet, by the mid-19th century, even Queen Victoria feted circuses to perform at Balmoral and Windsor; and by the 1890s the Temperance Movement was encouraging people to attend the circus rather than their local public house.

To appease critics, and compensate for any possible civic disruption, visiting circuses would give at least one charitable performance during their tenure. In 1887 Hengler’s Circus admitted 500 local Bristol school children to a free Saturday show; while William Cooke’s Royal Circus on North Street would run a special performance that the mayor would attend, the proceeds going to the Bristol Royal Infirmary. 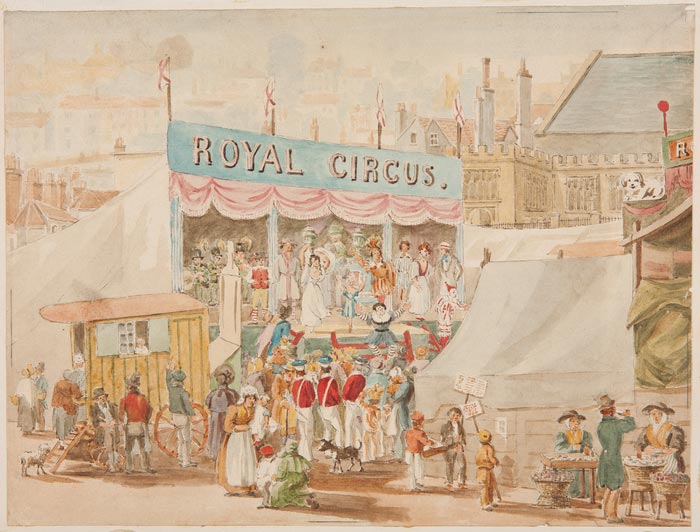 Visiting circuses traditionally paraded through the streets. Not only was this a form of free publicity for the circus but the spectacle of performers, animals and circus wagons would draw huge crowds. In 1899 when the American Circus Barnum and Bailey rolled into Bristol they were ordered by the local authorities to process early morning to avoid overcrowding on the roads and streets. Yet the authorities seem to have relented, for in January 1933 almost 65,000 people witnessed the Colston Hall Circus parade.

By the start of the 20th century both circuses and theatres had to compete with the growing new forms of public entertainment such as music halls and magic lantern shows. Circus still had the broadest appeal due to its variety of acts, but it still had to adapt and create new, exciting features to entice audiences through its doors again and again.

Since the circus had evolved from Astley’s original equestrian show, over time further performing animals were added to the programme and were met with audience approval. In 1810 the first elephant was shown in a British circus, and by the end of the 19th century animal acts had outnumbered human performances. Lockier’s Circus, which performed at Colston Hall in the 1930s, included various animal acts such as “waltzing horses, boxing ponies and an Indian elephant who had mastered the Abyssinian rhumba.”

The movement against animal use in circuses started in the early 20th century and by the 1990s, councils across England were banning wild animal shows taking place on public land. Today the majority of circuses are about human talent.

Circus is a respected art form in many other countries but rather under-appreciated in the UK, though this is beginning to change. Its popularity is on the rise, and in Bristol we have many companies and talented individual artists, as well as the biennial Circus City festival.

It was from the Continent in the 1970s and ’80s that the new wave of circus began – ‘cirque nouveau’ or ‘new circus’ – challenging and adapting old traditions as well as creating new ones.

Traditionally you were either born into the circus or had, of course, ‘run away’ to it. It wasn’t until the 1980s that England offered a third option, the circus school, following countries like Russia (1929), China (1949) and France (1972). Britain’s first circus school, Fool Time, opened its doors in Bristol, rather appropriately, on 1 April 1986. Founded by Richard Ward, it offered the UK’s first degree in circus skills and opened up circus to a new generation, making Bristol a hotbed for new circus talent and teachers.

New circus is more inventive than ever in order to impress today’s tech-savvy audiences; it is also no longer limited to the confines of one arena or Big Top. During the Industrial Revolution, circuses followed the masses into the cities. However, by the turn of the 20th century, urban expansion had forced circuses out into the suburbs. Today we’ve seen a reverse in this trend.

Although some tented circuses still use ground on the peripheries, many of Bristol’s contemporary circus companies use inner city locations. A former police station has been transformed into The Island on Nelson Street where The Invisible Circus has performed its immersive circus theatre in addition to Loco Klub, a cavernous, new-ish performance space underneath Temple Meads station. Meanwhile Cirque Bijou and Circomedia have performed in the old Victorian fire station on York Road – the latter of the two also has a gorgeous base in a Grade-I church in St Paul’s.

The animal acts may be long gone but, 250 years on, you can be wowed by highly trained and skilled human performers at Bristol’s festivals, theatres and venues; or take part in experiences as diverse as acro-yoga and clown-o-therapy. As Dr Haze of The Circus of Horrors says, circus is “very much alive and juggling!”