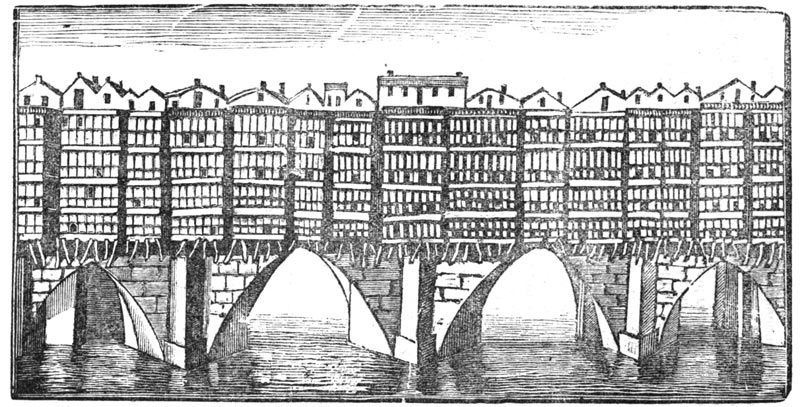 City History: Water under the bridge

It’s a defining image of our capital city: Old London Bridge spanning the Thames with tottering buildings weighing it down into the water. But few people realise that Bristol Bridge was much the same, if smaller – a dense chaos of dwellings and shops where people were born, brought up, worked, worshipped and died.

The first Bristol Bridge was probably built of wood in the 12th century but was replaced by a four-arched stone structure in the middle of the 13th, when England was ruled by Plantagenet kings and Bristol was just becoming a busy port city.

Quite elegant at first, buildings soon began to appear, gradually growing in number and size. Because the way was narrow (only about six metres, or 19 feet) they hung out over the river, supported by beams and buttresses. By the 17th century, most had four stories plus lofts and stretched back 10 metres, or 30 feet, with shops opening onto the thoroughfare and homes above. In her 2005 book Death and the Bridge, local historian Barb Drummond observes that, as at London Bridge, these were among the best houses in town – the yuppie flats of their day – “where fresh sea air could regularly blow away the stench of the city” and running water below carried waste clear. Tobias Matthew, Archbishop of York from 1606 to 1628, was born above his father’s linen shop on Bristol Bridge.

Perhaps the most impressive building on the bridge was the chapel of the Blessed Virgin Mary, completed in 1360. It sat at the very centre “with a wide and lofty crypt”, “huge buttresses” and a bell tower, according to notes made by amateur surveyor William Worcester in 1480. There were stained glass windows, too, including one depicting merchants and their wives. It was destroyed by a fire that started in an apothecary’s shop in 1647, along with more than 20 other properties.

In its later years Bristol Bridge seems to have become especially seedy and crowded. The thoroughfare itself, with no sight of the water, would have felt much like any other narrow medieval street – think the Shambles in York, or Harry Potter’s Diagon Alley, only less cute. As road traffic increased it became jammed and dangerous too, with pedestrians forced to dive for cover as carriages rushed by. In 1723, rioting broke out over the installation of new tollbooths – road rage indeed.

For these reasons, but perhaps also because so obviously medieval a structure didn’t fit the image of prosperous Georgian Bristol, an act of parliament was passed in 1760, permitting a new bridge to be built. It opened in 1768 as the old bridge, after 500 years’ service, was demolished.

That Georgian bridge is the one you can walk across today, enjoying views of the city over shimmering water. Next time, take a moment to imagine towering timbered houses overhanging the road, the glory of that lost chapel, and the thrilling complexity of a medieval city that wasn’t planned but grew.