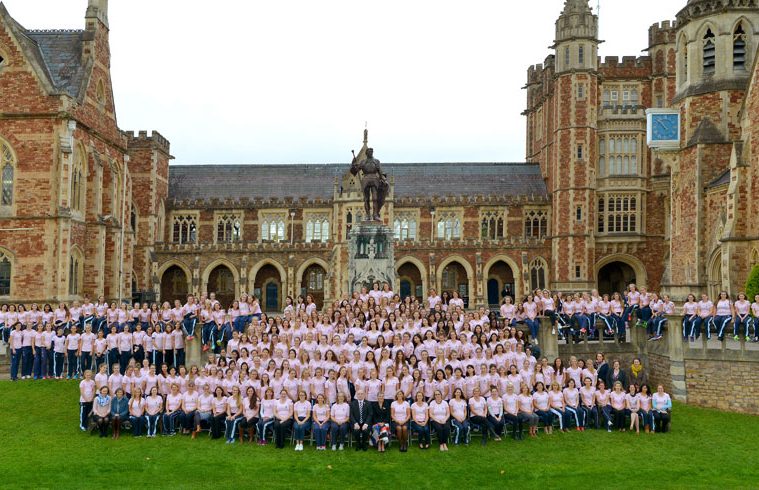 Staff, pupils, Old Cliftonians, parents and visitors came together to celebrate 30 years of girls at Clifton College and the official opening of a new girls’ day house – Holland’s House.

Since 1987, girls have played an important role in Clifton College’s success and their contribution in terms of both academic success (90% of girls achieved A*-B at A Level with 92% A*-B in STEM subjects) and in terms of what they have brought to the college’s art, music, drama and sport has been significant.

Clifton College girls have gone on to achieve great things, including winning an Olympic gold medal playing hockey for Great Britain, winning the National Shooting Championships, becoming World Rackets Champion, featuring in the BBC Young Musician of the Year, working for NASA and contributing to a book written by Professor Stephen Hawking.

A celebratory Chapel service to mark the 30th anniversary of girls was held last week followed by the official opening of Holland’s House, led by Alison Streatfeild-James, who is fittingly the first female Chair of Council for the College. Head of House, Annie Wooler, cut the ribbon on behalf of all of the Holland’s House girls. The event was also attended by Deputy Lord Lieutenant for Bristol Colonel Jane Thompson, one of the first women to attend the Royal Military Academy at Sandhurst, and Bristol Lord Mayor Cllr Lesley Alexander.

Holland’s House, which is the 20th house at the College and the 9th girls’ house, has been named in honour of Louisa Percival, whose maiden name was Holland. Louisa and her husband John Percival, the founder of Clifton College, were strong advocates of the importance of giving girls the same educational opportunities and advantages as boys at a time when this was very much not the prevailing view. Holland’s House will honour Louisa’s forward-thinking contributions to female education.

Dr Tim Greene, Head of College, explained the significance of the anniversary and the new house opening: “The opening of Holland’s House represents a very exciting period of expansion and the high demand for places reflects the superb opportunities available to girls at Clifton. The College is now 50/50 in terms of girls and boys and has achieved the vision that Council and others had 30 years ago when they took the brave and critical decision to turn the College into one of the foremost and successful co-educational public schools in the country. This is something of which we are immensely proud.”