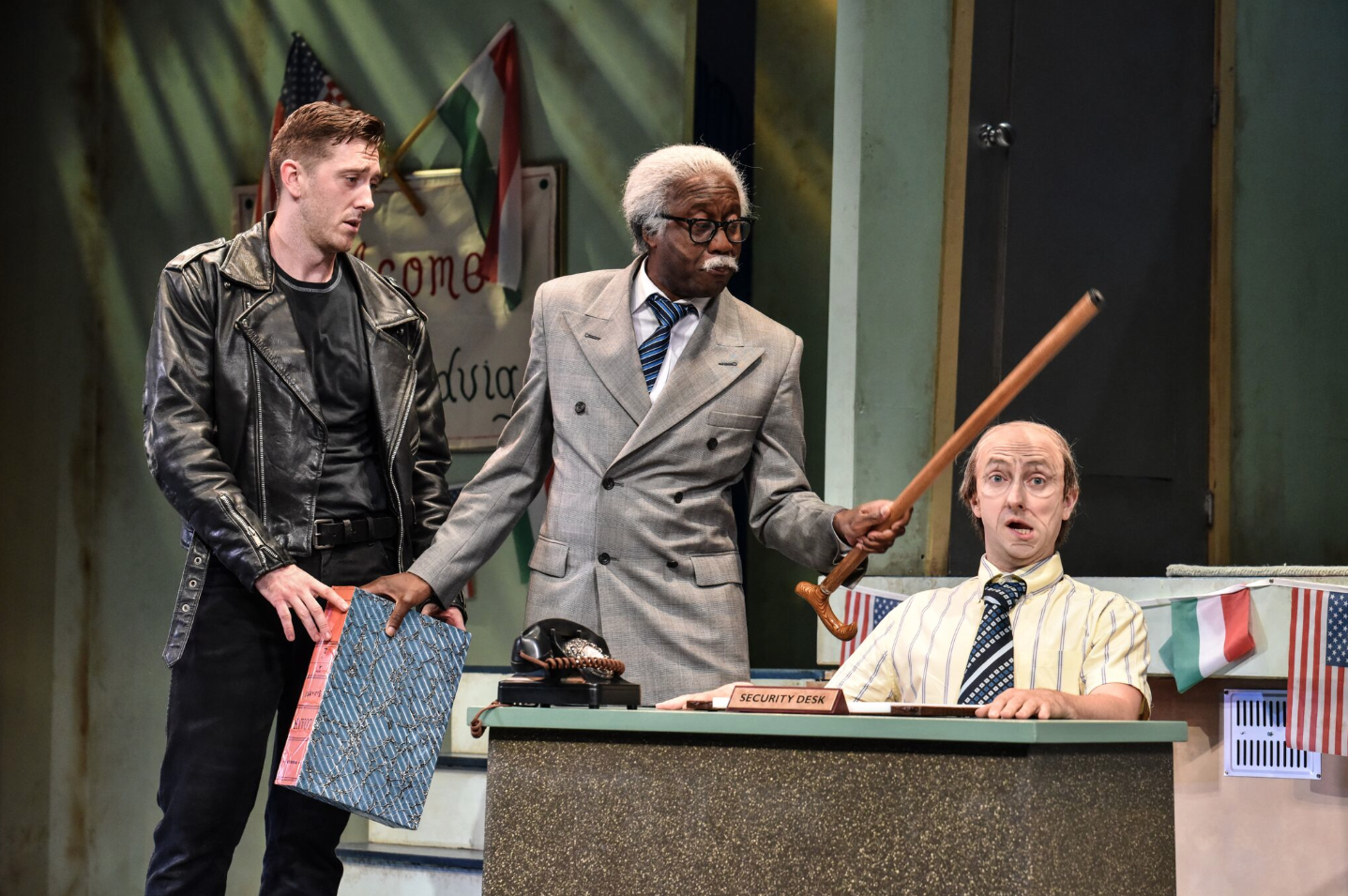 Following the sell-out success of their multi award-winning comedy The Play That Goes Wrong, Mischief Theatre are back on the road with their latest smash hit, The Comedy About A Bank Robbery, which is now enjoying its third year in the West End.

We spoke to Jonathan Sayer, co-writer and Mischief Theatre Company director ahead of the show’s visit to Bristol Hippodrome…

Mischief Theatre celebrates its 10th anniversary this year – what was your inspiration when you first started out; did you have a ‘game plan’?

Our main inspiration comes from our teachers who we trained with at LAMDA. Adam Meggido who runs the company responsible for Showstopper the Improvised Musical, for example, has been a huge inspiration for Mischief Theatre’s beginnings. Personally, I was inspired by the style of old silent movies; Charlie Chaplin, Laurel and Hardy and Buster Keaton. We’ve also been heavily influenced by a man called Michael Green, who wrote The Art of Coarse Acting and the coarse acting plays, which are mini plays about things going wrong in the theatre and different amateur actors and their styles of acting. Quite sadly, Michael Green died this year. We dimmed the lights in the theatres as a mark of respect.

What have been the major comedy influences on the style of theatre you produce?

A huge influence has been big physical slapstick comedy, tied in with traditional English humour. Fawlty Towers is the perfect example, stuff that really is about status and conflict. But then we try to add an anarchic twist. The Marx brothers and Albert and Costello have been big influences as well, just that fast thinking, quick dialogue with a million jokes coming at you as thick and fast as possible.

Was it a struggle initially to get the company off the ground and have you been surprised by the scale of global success you have achieved?

We’ve definitely been surprised by the success of the company! In hindsight, you look back and you say ‘oh wasn’t that a struggle’ when we weren’t being paid. This was before we met our producers. We were working different jobs but everyone was all in it together, building the set and putting stuff on. You don’t look at it as a struggle because, at the time, it’s just really good fun, working with your friends. There were certainly moments when we all had to rally together but we’re really lucky to have a team who love being and creating together and share a similar mind-set. That makes it easier.

Why do you think your comedy shows work so well today?

I think people need to laugh a lot at the moment and I think we’re really good at offering pure escapism. It’s not political, it’s not about anything other than being as funny as you possibly can be, minute by minute, and making people laugh.

What has been the inspiration for some of the storylines – and for the play within a play concept for the ‘Goes Wrong’ shows?

For the play-within-a-play concept for the Goes Wrong shows, you can go as far back as the mechanicals in A Midsummer Night’s Dream but, as mentioned before, Michael Green and The Art of Coarse Acting is a really big part of that.

A huge inspiration for The Comedy About A Bank Robbery has been silent comedies, big physical comedy, like Charlie Chaplin. A lot of that work started out in the theatre, in vaudeville and in the music hall, doing these big dangerous stunts and then they moved it onto the silent screen.

And aside from the bigger conceptual ideas there are also (sadly) moments taken from our own lives. If we’re talking about The Play That Goes Wrong, I’ve definitely missed an entrance in a straight play before. I know that Henry Lewis, one of the writers, got stuck in a dog flap once and that comes up in Peter Pan Goes Wrong… There’s a whole list of embarrassing moments that happened to us in real life!

What turns an initial idea into a production that gets taken forward?

First of all, it’s just about sitting down and forcing yourself to write it. I co-write with Henry Shields and Henry Lewis. And then the way we work is that we develop all the scripts with the core creative team, so we’ll write a script and get it on its feet with the guys and workshop it and they’ll critique it and add to it. And then you bring in creatives, designers, directors and others and then it snowballs under the wonderful auspices of our producers.

Now in its third year in the West End, how does The Comedy About A Bank Robbery differ from previous shows?

There’s a huge difference between Bank and our other shows in the fact that Bank is not a ‘play within a play’. It’s a traditional fourth-wall play, but you can still expect an incredibly high gag rate, huge stunts like the previous shows, all intertwined with some Marx Brothers patter and also lovely singing and bits of acrobatics. It’s a much more ambitious piece! And then, as well, it has a big storyline to it, so you really fall in love with the characters and follow their journey.

There is a large element of physical slapstick which requires split-second timing – have there ever been any serious mishaps?

There have been some serious mishaps; we’ve had broken feet, dislocated shoulders, concussions (I’ve had three concussions), lots of repetitive stress BUT on the whole everything is very safe and definitely well rehearsed. It’s a contact sport I suppose and, particularly with the original team, you get such a huge amount of enthusiasm and people who are really happy to throw themselves around. The Comedy About A Bank Robbery is a fantastic example of that, there are big jaw-dropping stunts in there.

You have two shows playing concurrently in the West End (The Comedy About A Bank Robbery and The Play That Goes Wrong) with productions playing around the world including on Broadway – what do you think makes them translate so well into other cultures?

I think that the style of comedy is just pure escapism and that can be enjoyed by all cultures because it’s not specific to any particular country or place. There’s just a huge amount of jokes and a company that are very happy to be laughed at rather than making witticisms, and that’s very relatable. There’s always characters that you can quickly identify, fall in love and go on a journey with.

What advice would you give to other young theatre companies starting out?

Just go for it! Make something happen and don’t be scared to fail. When you fail you’ll look back and feel proud and find that you’ve learnt something. Very often you find that the only thing that stops you from doing something is yourself. There’s always a million different reasons not to put yourself out there and have a go, and only one reason to do it. So just really remember that one reason and be driven by your passion and your friends and your heart. It’s always really scary, so just be bold and take a jump at it.

You’ve recently been Stateside working on a new project – can you tell us anything about that?

Yes, something new is in the pipeline! It’s really exciting but I’m not sure how much I’m allowed to mention so I’m going to say nothing at all…

What ambitions do you have for the future of Mischief Theatre?

I think all we want to do is carry on making people laugh. We’re really lucky that people approach us with new projects so we’re looking forward to broadening our development slate and doing lots of new work. Maybe some more sequential work but also some totally new ideas. We’re really keen to work in TV and hopefully that will be in the not too distant future. But really, we just want to stay together, make people laugh, and have fun.

Previous
If the crown fits: Princess & The Hustler at BOV