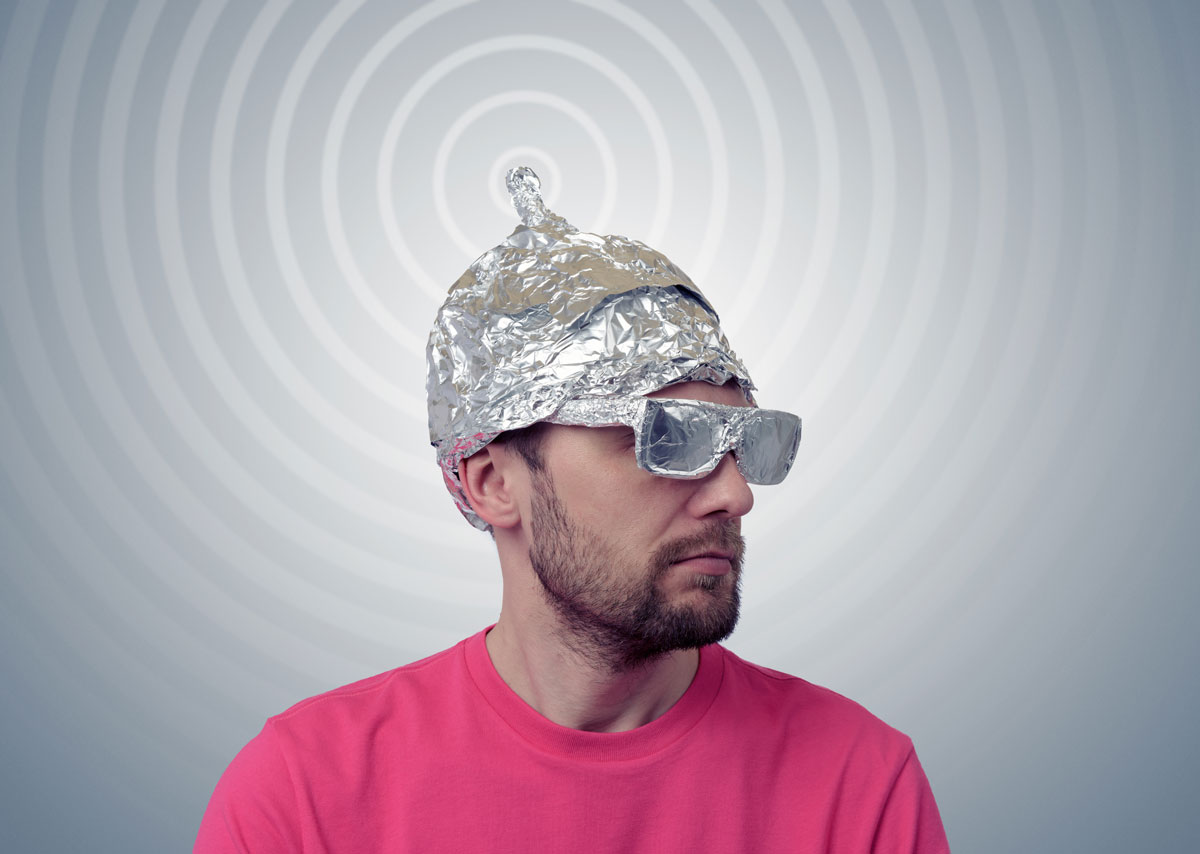 We all love a conspiracy theory – don’t we? But then again, what do we think about the forces that initiate them or the people that truly believe them? Studies going on at The University of Bath are investigating their sources and effects.

The University of Bath, like many academic institutions, has been actively involved in the fight against Covid-19, from producing face shields and finding effective treatments to providing NHS staff with free accommodation. But in a more left-field arena, its research into conspiracy theorists has highlighted the current vogue in the so-called “truth-seeker” community that 5G cellular technology is spreading the disease.

These beliefs have apparently led to more than 50 attacks on 5G masts in the UK, prompted tweets about its supposed dangers by Hollywood stars John Cusack and Woody Harrelson and led to an “ill-judged” comment by the ITV broadcaster Eamonn Holmes. An Ofcom survey earlier this month suggested that unfounded theories linking Covid-19 to 5G technology are the most common example of online misinformation in the UK.

For the past three years University of Bath lecturer Tim Hill (pictured), together with two colleagues (Stephen Murphy and Robin Canniford) from the universities of Essex and Melbourne, has been enmeshed in these communities – work which he describes as “challenging”. “Our research is ethnographic,” says Hill, “which means we hang out with them, conduct interviews, record casual conversations and observe the way they use social media. It’s about trying to understand why conspiracy theories resonate and why people are attracted to them. What our research does, which is kind of unique, is track people on a journey from radical sceptic to fully blown conspiracy theorist,” a David Icke-like character, if you would.

Conspiracy theories appear to become particularly prevalent in times of crisis “when the state appears powerless over whatever it is trying to manage”, says Hill, and coronavirus provided a “perfect storm”. An earlier example might have included 9/11 when, again, conspiracy theories were commonplace. They arise, adds Hill, because for some people “they provide reassurance that there is a structure to the world and that someone one is behind it [all], no matter how evil or benevolent they are.” In a nutshell, “truth-seekers” are constructing a way of making sense of the world when faced with sudden and unprecedented threats, one that avoids the randomness of life.

The arrival of 5G, the term for the fifth generation of wireless communications infrastructure, which has spread across 40 countries worldwide, seems to be of particular interest to conspiracists. “We started to see the link between 5G and coronavirus in the middle of January,” says Hill. “This was just when the English media began to report on the virus but way before it started to be understood as a pandemic.The concern around 5G is nothing new – all the time we’ve been doing this research, groups have existed on the margins and the people who are involved are typically invested in natural health, alternative forms of medicine as well as those who are wary of technology and interested in spiritual and mystical ideas. This is why you find pockets of people who are very clearly against 5G in places such as Frome and Glastonbury.” There are also anti-5G group based in Bath and Bristol, while another leading activist is John Kitson from Totnes in Devon. He stood for parliament in last’s December general election on an anti-5G platform – he got 544 votes.

The activists’ issue with 5G is that they claim that the new network generates radio-frequency radiation that can suppress the immune system, or that the virus can be transmitted through the technology itself. Both ideas have been condemned by the scientific community and dismissed as “ignorant science” by Public Health England.

Yet another favoured angle from the community, suggests Hill, is that the virus began in Wuhan because it was one of the trial cities for 5G. Similar groups have also claimed that the virus emanated from  a research facility in the Chinese city. Hill says there has also been chatter about Bristol University, which has been in the news over the past two to three years over the number of suspected suicides by students. He points to stories doing the rounds on Facebook that highlight the fact that the university is also a test site for 5G. The fact that this largely seems to ignore other trial cities seems to have been overlooked, and Hill adds that Iran, which has a high number of cases, doesn’t have 5G.

There’s no doubt conspiracy theories have been around for centuries – there were claims that the Emperor Nero faked his own death, while conspiracists have also been exercised by the Moon landings (during the Cold War the idea that they were faked fitted the Soviet Union’s geopolitical narrative), while there has always been talk about the deaths of, among others, John F Kennedy, Elvis Presley and Diana, Princess of Wales. Climate change too is seen by some, says Hill, “as a story engineered by a global elite to do something to the economy”, and, of course, there’s the notion, promoted by David Icke, that we are in fact ruled by alien lizards.

But Hill believes that the 5G theories are a symptom of a distrust in government. In Britain, he adds, belief in conspiracy has increased in recent years. “That’s why this research started because around 2016 there were a host of surveys conducted by YouGov that demonstrated a growing belief in conspiracy theories and an increasing distrust government, authority and [a variety of] institutions.”

Some of it, says Hill, can be seen as a form of top down propaganda, “for instance Russia Today is very prominent in conspiracy theory communities  and features on a lot of 5G communities,  so you can’t overlook the role of Russia in peddling this disinformation.”

Other angles include the rise of populism, which has also fed a sense of distrust. “When you look at populists around from Jair Bolsanaro [in Brazil] to [Nigel] Farage, Marine Le Pen [and Donald Trump], the idea [they promote] is that you cannot trust the élite and they are essentially corrupt.,” asserts Hill.

Responding to this sense of mistrust and to spread the word, various anti-5G groups have been using outlets, such as the neighbourhood hub Nextdoor to get the conversation started locally using the narrative that in a world where you can’t trust the government or the media so you put your faith in friends, neighbours and as Hill points out, “you soon have a group of likeminded people”.

The crux for Hill, however, is that “people who believe in conspiracy theories are those who are feel as if they are essentially excluded. They are on the margins of society and feel powerless.” Being part of a conspiracy theory group gives the most vocal activists a sense of prestige and status, which they have never had before.

It’s also worth noting, he adds, that the “language of wireless communication technology is really specialised and scientific”, which means it can be difficult to get to grips with. In essence, “this fuels a [further] sense of distrust in public health organisations and medical expertise. Add in the fact that the economy has effectively shut down and people are being told to stay indoors” and the theory is that this creates the perfect sinister scenario for the “truth-seekers” about coronavirus and the timing of the roll-out of 5G.

I wonder what can be done to control the spread of unsubstantiated rumours as social media has accentuated the issue. Hill notes conspiracists “love it when someone tries to ban them [or attempts by Facebook and Twitter to intervene] as it plays on the idea that they are speaking the truth and the powers that be can’t handle it. It’s difficult to grasp what the effective control mechanisms can be.”