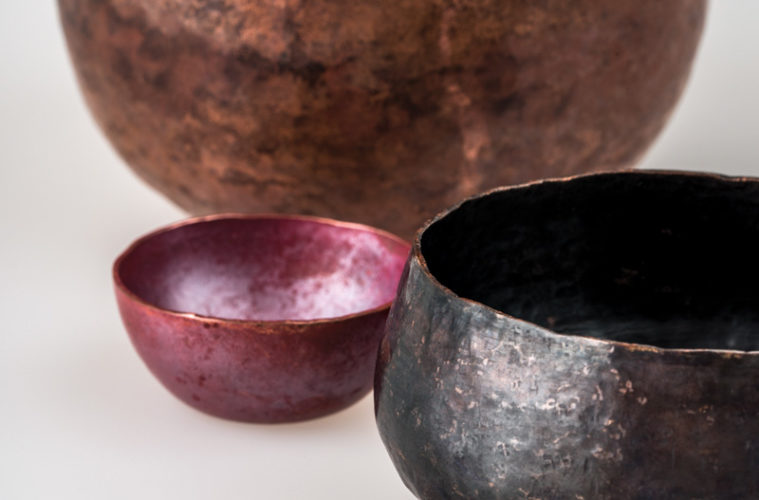 Conversations in Making: The first contemporary art exhibition at Stonehenge

Did you know that the first contemporary art exhibition has opened at historic Stonehenge, courtesy of Bristol artist Linda Brothwell? We found out a little more… Images by Jo Hounsome Photography

Showcasing 40 works in silver and copper made by the locally based applied artist in her Spike Island studio, ‘Conversations in Making’ is inspired by Stonehenge itself, by the Neolithic tools found in the landscape and by conversations with present-day makers and tradespeople. These include people living and working in neighbouring Amesbury – from a thatcher to a tattooist, a cobbler to a leather worker, a key cutter to a hairdresser.

Linda Brothwell has also been influenced by the natural materials found in the countryside around Stonehenge and prehistoric artefacts from Wiltshire and Salisbury museums’ rich collections, as well as historical accounts, photographs and drawings. She was particularly intrigued by the story of the Amesbury Archer, a man buried with the earliest gold and copper objects, as well as metalworking tools and several Beaker pots. He had travelled to Stonehenge from central Europe, bringing with him knowledge of metalworking which transformed prehistoric Britain.

The exhibition allows visitors to peer into the past and see Stonehenge with fresh eyes. The finished artworks are a tribute to the traditions of tool use and vessel making in the Stonehenge area, from olden times but also today. The set of distinctive, unique vessels form a portrait of the area, charting the connections between Stonehenge and the communities that have lived around the monument, both past and present. “Stonehenge has inspired art and artists for centuries – from those who illustrated medieval manuscripts, to the Romantic paintings by Constable and Turner and more recently artists such as Jeremy Deller,” says English Heritage historian Susan Greaney. “So it’s really exciting to host a contemporary art exhibition at Stonehenge for the first time. Linda Brothwell’s work, which looks at tools and vessels as a thread linking people and place over time, provides an intriguing new way to think about Stonehenge and the archaeological objects found here. A visit to the new exhibition, coupled with a trip to Wiltshire and Salisbury Museums to see some of the ancient objects that have inspired Linda’s work, makes for a great day out and provides a fascinating picture of Stonehenge.”

Linda – whose previous project The Tool Appreciation Society was dedicated to makers and their tools – has work in both the V&A Museum and the Royal College collections. She has exhibited in the UK and internationally for the British Council, The Design Museum, Palais de Tokyo, the Korean National University of Cultural Heritage, and The Royal Society for Arts. She is pioneering an understanding of British craft skills and tools by illustrating the importance of their value to economic, social and cultural development.

“Often I work by first mapping a place; talking to people about what they do with their hands and with their days,” she says. “Conversations in Making is my attempt to map Stonehenge and Amesbury by talking to the people who live, and have lived, here, whether through real-life dialogues with local makers or imagined exchanges with the historical figures such as the Amesbury Archer.”

Brothwell’s final conversation is with the Stonehenge visitor, and the local community, inviting them to walk around the exhibition and try to hear the conversations. When the exhibition ends, the 40 objects will find their way back into the community – into schools, libraries and perhaps even the local chip shop – to be used and loved, remain in dialogue with the place they came from and with the people who inspired them, and allow the conversation to continue.

• Linda Brothwell: Conversations in Making runs until 24 November at the Stonehenge visitor centre

Featured image: Linda was particularly intrigued by the story of the Amesbury Archer, a man buried with the earliest gold and copper objects, as well as metalworking tools and several Beaker pots