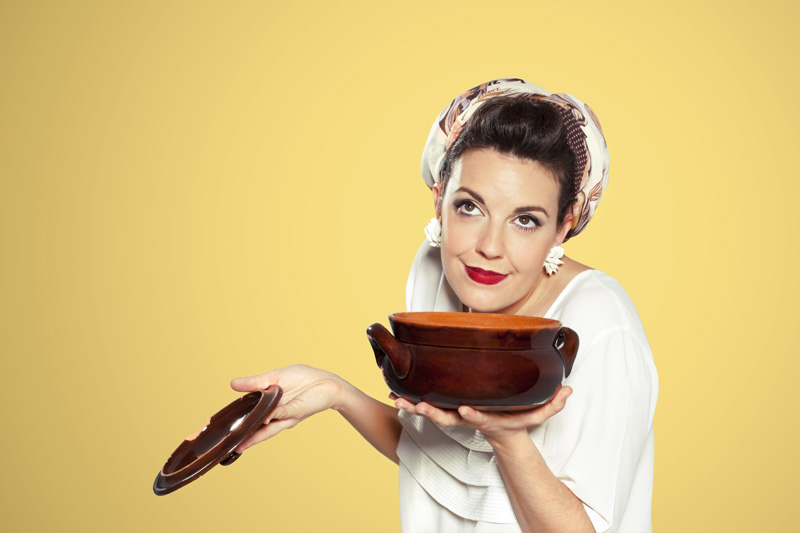 Melissa Blease abandons posh ingredients and digs out her grandmother’s cookbook for some Corona kitchen inspiration.

Cooking is easy. There’s no great skill involved in following the dot-to-dot instructions that have been laid out for you by someone who really knows how to do it; as long as you choose Nadiya Hussain over Yotam Ottolenghi, anybody can be a Jamie Oliver.

But right now, even easy cooking involves a lot more work than usual. Shopping trips are tricky, basic ingredients have garnered luxury item status  and (unfounded) scare stories about our food supply chain abound. But we gotta eat, so eat we shall – and for me, searching for inspiration for my family’s next dinner, I’m finding looking back in order to look forward hugely comforting.

My grandma had a selection of dishes in her repertoire that she used to refer to as the ‘Sit and Wait’ collection – nothing to do with dishes designed to teach my sister and I good manners at the table, this raft of recipes could be cooked up when she had the time (and time is something most of us have a surfeit of, right now) to keep an eye on something that braised long and slow in the oven, then simply reheated later on when everybody wanted feeding. Such dishes were, I guess, her version of the ready meal, except they were homemade, didn’t require chilling between cooking and eating (unless they were to be eaten the next day) and boasted flavours and ingredients that benefitted from both the slow cooking process and the waiting around time.

I have my grandma’s cookery books, with all her original notes intact. Last night I made her beef hotpot, exactly as she used to make it. So last night, I had dinner with my grandma and a woman who could have told me all I need to know about keeping calm and carrying on and it left me feeling both sated and optimistic. I’m not sure, however, that she’d have approved of my latest food fad…

Nostalgia for times gone by combined with the need to do the best with what I can find in the shops, my fridge and my larder have led me to consider, rediscover and appreciate the food that time forgot, many of which are still in plentiful supply in supermarkets, little shops or even the back of your own kitchen cupboards as modern shoppers, their consciousnesses dominated by ras el hanout, black garlic, miso, tahini, achiote paste and all the other stuff they didn’t know existed five years ago but think they can’t live without today, panic buy the posh stuff.

Marmite, Oxo cubes, tinned salmon, Branston Pickle, Bovril, packet cake mix, tinned rice pudding, Birds Angel Delight, Heinz macaroni cheese  –  bless ’em all. And oh, instant mash! While peeling, boiling and squishing a spud has to be the biggest no-brainer kitchen activity there is (and, last time I checked, potatoes are still in plentiful supply in the UK), boiling a kettle and adding a couple of scoops of feathery flakes is even simpler. Okay, so the resulting gloop isn’t quite the kind of mash that Nigel Slater is referring to when he talks about his favourite food ever and it’s about as far from an organic, locally sourced, natural ingredient as you can get. But the quintessential taste of a 1970s childhood is, for many people, their own Proustian moment: a passport for a trip on their own personal time machine. Fun? You got it!

Got teenagers in the house? Treat them to a YouTube screening of the award-winning 1974 Smash ad campaign, featuring a post-nuclear family of martian robots giggling hysterically about how ‘earth people’ used to make mashed potato – that’s your bonus entertainment for the evening sorted too.

Over the past week or so, my household has hoovered up hardboiled eggs mashed with mayonnaise and a splash of malt vinegar (yes, really!) wedged between slices of bread from a pre-sliced loaf. We’ve scoffed raspberry jam butties at tea time, and trifle made with Mr Kipling Swiss Roll, Hartley’s strawberry jelly, Ambrosia tinned custard and squirty cream after dinner. These are the foods that, just a few short weeks ago, would have been referred to as Guilty Pleasure junk grub by food snobs across the nation; who’s feeling guilty now?