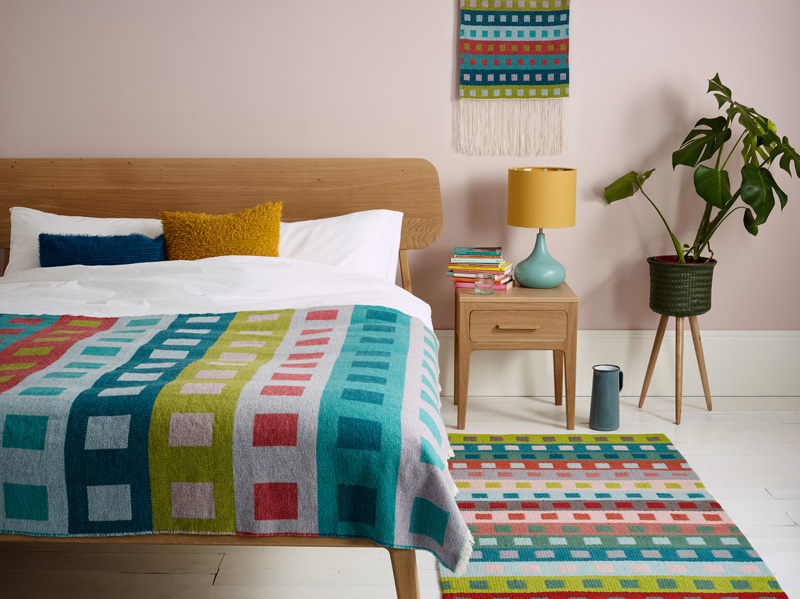 As well as nimble new business models, lockdown prompted all sorts of creative projects in resourceful Bristol – from photography collections depicting different residents looking out from their front windows to textiles inspired by the vibrant house facades that characterise certain stretches of the city. The latter struck local weaver Angie Parker as a brilliant idea for a new collection as she wandered past them during daily walks – especially once she’d done some digging into their history.

Since the mid 1960s, there’s been a growing number of brightly painted houses jazzing up the urban landscape, something which has grown in popularity in recent years. When the bursts of colour from Angie’s daily walks started to find their way into her designs, she decided to do some research into the history of these picturesque properties. Aware that local company Stride Treglown had, in 2017, launched the Bristol Colour Capital initiative to promote Bristol as the most colourful city in the UK, Angie approached the architects for their thoughts. Head of sustainability Rob Delius shared the findings from resident research collated and presented at a seminar where a scheme to link repainting homes with utilising home energy improvement grants was discussed.

Rumour has it that architect, entrepreneur and politician George Ferguson may have been the first to paint his newly acquired home in Cliftonwood. On meeting up with George, Angie established that he painted his dull grey house terracotta red in 1966, using Sandtex® Masonry Paint, as his pal up the road painted his house a rich blue shade at the same time, and this is how one of the most photogenic streets in the city began its transition into technicolour.

These terraces had previously been earmarked for demolition, with the proposal of three blocks of flats to replace them. A u-turn in planning enabled savvy investors to buy the run-down properties cheaply, and it gave them the opportunity to make their mark on the city. Now the views of these houses from the docks are almost as photographed as the suspension bridge. George cites the influence of 1960s psychedelia, Glastonbury, and the general feeling of freedom at the time for the decision to paint away the grey – and with so many of Bristol’s terraced houses being rendered, it’s easy to see how the idea gathered momentum.

Another rumour is that the trend started in Totterdown, where a local decorator offered cheap house painting to make use of the free coloured paints he’d acquired. He became pretty busy after the first few daring homeowners started the ball rolling. Once one person took the plunge, it seemed the rest of the street would gradually follow.

While painted houses aren’t exclusive to Bristol, in this city the trend was led by the residents, rather than artist initiatives or planners. That said, Bristol is home to thousands of artists and creatives, so it’s hardly a surprise that residents here take every opportunity to express themselves though bold combinations of house colour and front doors.

The hilly landscape in the city lends itself to the aesthetic, with one respondent to the Stride Treglown survey pointing out how much they love spotting their home from the opposite side of the city. Over the past decade the rainbow has grown apace, with reasons including the influence of travel, as well as simply wanting to join in with what many see as ‘a Bristol thing’. Colour choices are personal, of course, but according to the ST report, most respondents were considerate of their neighbours when selecting colours that complement the rest of their street.

Angie’s rugs and wall hangings are handwoven in BV Studios on Phillip Street in Bedminster, opposite Windmill Hill City Farm, with the new lambswool ‘Bristol blanket’ – created in partnership with Bristol Weaving Mill – sporting the uplifting colours of central Bristol abodes to lift spirits and brighten the home.

“Designing textiles based on these houses was a joyful experience, with the biggest challenge being the limit on the number of colours I could use when working with my local mill,” says Angie. “Everyone I’ve asked finds the views uplifting and cheerful, and as a designer I feel incredibly fortunate to have such joyful and inspiring blocks of colour to feast my eyes on, every time I walk out of my house.

“My intention is that the blanket will encourage people to use more colour in their homes to improve their mood and wellbeing. Incorporating blankets, throws and rugs is a way to do this without feeling overwhelmed if you’re nervous about bringing in bold colour.”

Angie wanted to reflect with her design the connections between neighbours and local community which, for many, were strengthened during lockdown, and is sending 10% of sale profits to mental health charity MIND. “I wanted to reflect the special bonds that formed from the shared experiences, in the hope that we continue to strengthen them and support each other in the present and the future,” she explains. She hopes the project will be the start of an ongoing dialogue too – does living in a colourful neighbourhood make people happier? Can colour really improve health and wellbeing? Does Bristol have more coloured houses than any other UK city? Have your say via the Angie Parker website below.

The Bristol blanket is priced at £295 (The Bristol Magazine readers will receive 20% off – contact Angie through her website contact form for a link to the offer); angieparkertextiles.com