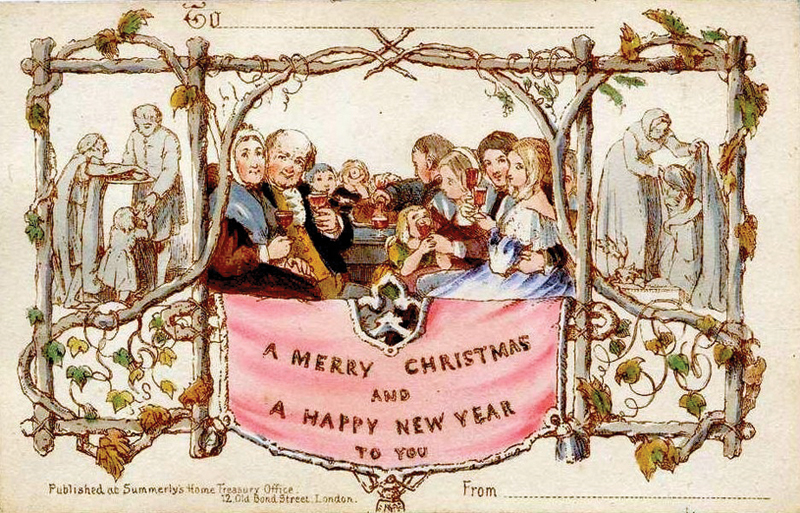 When it comes to truly imbibing the Yuletide spirit, nowhere does it better than Bristol, as Malcolm Croft discovers while digging up five festive city stories

After a few trips to the central library and scrolling through way too many microfilms and antediluvian editions of the Bristol Mercury, one thing became crystal clear: Bristol is haunted by ghost stories of Christmas past, present and future. From the onslaught of the Bristol Blitz of Christmas 1940 (Hitler claimed to have completely destroyed the city; he was wrong) to ancient adverts for Harvey’s Bristol Cream (a definitive taste and smell of Yuletide, surely?) to a famous festive market called St Nick’s, and even St Nick Park’s reinvention of Christmas Day TV with his amazing Aardman adventures, Bristol is as ‘Christmas’ as crackers and crass jumpers. In fact, paradoxically, the only thing that isn’t Christmassy about Bristol is the Christmas Steps. Here are a few of our favourite seasonal tales from the city’s archives…

With more than two billion books sold, Agatha Christie is known, quite rightly, as the world’s most popular novelist. But, 105 years ago on Christmas Eve 1914, before any fame, fortune and fandom, Torquay-born Agatha Miller married Captain Archibald Christie, a pilot in the Royal Flying Corps, at Emmanuel Church, Guthrie Road, Clifton. The wedding ceremony was arranged hastily to capitalise on Archibald’s Christmas leave from the First World War and Emmanuel Church was quickly chosen; Archibald’s stepfather was a schoolmaster at nearby Clifton College.

The couple had decided to get married the morning before, when they had met for the first time in several months, in London, at a tense reunion. The pair had not laid eyes on each other since Archibald was drafted to France at the outbreak of the war. On 23 December, Archibald was reluctant to marry Agatha, but as they travelled to Bristol later that afternoon, he suddenly changed his mind and agreed that they should marry. Immediately. The couple swiftly obtained a marriage licence the following morning, paying the princely sum of £8 for the privilege. The marriage licence records Archibald was a pilot and Agatha was a ‘spinster’. Due to the late notice of the licence, Agatha did not wear a white wedding dress, nor did any of her family attend. Instead, she walked down the aisle in only her ordinary clothes, accompanied by a bridesmaid (an old friend who just so happened to be walking past the church at the right time!)

The bride signed her name as Agatha Mary Clarissa Miller; the last time the world was to ever see her maiden name in print. Agatha was aged 24 years old. The next day the Christies spent Christmas Day in Agatha’s family home town of Torquay. On Boxing Day, Archibald returned to France and did not see his wife again until summer 1915. Following the end of the war in 1918, Archibald and Agatha moved to London. The marriage ended in 1926 when Archibald filed for divorce so he could marry his mistress, six years after the publication of Agatha’s first novel, The Mysterious Affair at Styles.

Only Fools and Horses Christmas Special, 1996

Starring David Jason as Del Boy, and Nicholas Lyndhurst as Rodney, Only Fools and Horses is considered by many to be the best British sitcom ever made. More than 35 years after the first series aired, the show’s classic status has endured and it has retained a legion of loyal fans both at home and around the globe. One of the show’s most memorable moments – arguably one of the most beloved in TV history – appeared in the show’s Christmas Day 1996 special Heroes and Villains. You know the one, where Del and Rodney are invited to a fancy dress party. Their Robin Reliant breaks down in clouds of smoke. So, they run through the streets dressed as Batman and Robin, stopping en route to fight street crime, naturally. Well, that now-famous scene was filmed in Bristol – on Penn Street, in Broadmead.

In a 2001 poll, the episode was voted the UK’s favourite Christmas show of all time, largely down to the comedic genius of that one scene. The episode’s ‘Batman and Robin’ scene, as it has become known, written by the show’s creator, John Sullivan, was even re-created for the 2012 Summer Olympics closing ceremony as a nod to its enduring brilliance. Due to Only Fools and Horses being one of the first comedy shows to receive special treatment at Christmas, and earning the coveted Christmas Day evening TV slot – a time when most of the nation plonked itself in front of the sofa, stuffed and tipsy – the episode attracted an audience of 21.3 million people (a record 50 per cent of the TV viewing households at the time). Look further, and the connection with Bristol runs deeper. From the show’s second series, Whitemead House, on Duckmoor Road, Ashton Gate, doubled up as Del’s infamous Peckham tower block, known as Nelson Mandela House. For the tenure of the show’s seven series, and 16 Christmas specials, shot between 1981 and 2003, stars David Jason and Nicholas Lyndhurst could be seen regularly shooting their wheelin’ and dealin’ antics on the streets and back-alleys of the city.

The Christmas card – that exalted guiding light of Yuletide giving – has a little-known historical link to Bristol. It requires a small stretch of imagination, but is an interesting story nonetheless. Sir Henry Cole, a British civil servant and inventor (who was born and lived in Bath, FYI) is credited with devising the concept of sending greetings cards at Christmas time. Yes, he’s to blame. The year was 1843. However Cole – also often credited with the invention of the world’s first postage stamp, the Penny Black – is not the star of this story. His colleague, John Callcott Horsley, is. Horsley designed Cole’s first ever Christmas card and, in doing so, created the aesthetic and sentiment that remains largely unchanged on Christmas cards today. Together, Cole and Horsley would begin a tradition that now sees more than one billion Christmas cards sent in the UK alone (an average of 16 cards per person). But here’s the Bristol twist. In 1836, Horsley’s sister, Mary Elizabeth, fell in love and married Bristol’s favourite son-from-another-mum, the engineer and architect Isambard Kingdom Brunel – of course, synonymous with Bristol. At the same time as his brother-in-law John Calcott Horsley was designing the first Christmas card, Brunel was designing the SS Great Britain, the largest ship in the world, which also happened to be the first screw-propelled, ocean-going, iron-hulled steam ship and a forerunner for all modern shipping. The invention of the Christmas card pales in comparison. Brunel was also voted the second greatest Briton, coming second only to Winston Churchill, who, of course, was famously the chancellor of the University of Bristol from 1929 to 1965.

One of the most predictable things to happen this Christmas will be you (or someone you know and/or love) wrapping up in a thick blanket and cursing the cold winter weather through pursed lips. Especially if it’s a white, or worse, wet, Christmas. As you swaddle yourself in fine woollen wares and soft faux fur, give festive thanks to Bristol-based Thomas Blanket (possibly Blanquette), a Flemish weaver who travelled by boat to Bristol in the mid 1330s and set up a loom factory in the burgeoning port town. It is Thomas Blanket, and his famous family name, that gave rise to the name of one of winter’s most necessary accessories, and popular Christmas gifts – the blanket. Christmas socks were not invented until the 1800s, and not by a Bristolian, sadly.

Back in the 14th century, Britain was producing the best wool in the world. In order for the British cloth industry to become more profitable (and taxable), King Edward III (reigned 1327 – 1377) began restricting the wearing and importation of foreign fabric as well as banning export from England of raw wool. King Edward also encouraged weavers from other wool-making nations to flee from the horrors of war and French rule and set up shop in merry England. Thomas Blanket was soon on a ship bound for Bristol. In the late 1330s, he founded a weaving enterprise – one of the first of its kind – at his home in Tucker Street, just south of Bristol Bridge. There, he employed other weavers to churn out blankets for a salary. While this upset other local artisan fabric makers, Blanket’s production methods were so effective (read: ruthless) that he received patronage and power from King Edward to keep on producing more. At that time, people without means – ye olde commoners – would have slept on straw, or the floor, with no warmth or cover, so the increased manufacture of cheap woollen blankets from Blanket’s factories would have provided many poorer people with additional warmth during long cold winters. Naturally, it didn’t take long before Blanket’s blankets spread like, well, blankets.

It’s possible that blankets became known by that particular name due to Thomas’ family, in the same way that medieval names were given to people based on their occupations, i.e. Bakers, Butchers, Clarks, Smiths, etc. At the time of his death, in the 1370s, Thomas Blanket of Bristol had become famed for his wool products. That’s not to say he invented the blanket, but there is enough local Bristol history to be confident that his name could be the original provenance of it.

We now turn our attention to a curious and quirky slice of modern life with the delightful reporting of the first pub in the country to put up its Christmas tree. In July. The pub, of course, was in Bristol. On 23 July 2019, the Air Balloon pub, north of the Gloucester Road, in Filton, put up its Christmas tree five months before it made any rational sense to do so. The artificial tree, measuring five-foot in height, was adorned with gold, blue and silver baubles. The weather outside was indeed frightful; the mercury had just hit 37°C – the height of the nation’s summer heatwave. “The tree is a talking point,” Joanna Johnson, manager of the Air Balloon told the Independent. “This is the third year in a row we’ve had the tree up early. We’ve already had a few bookings for Christmas parties and Christmas lunch as a result. We like people to know we take bookings for Christmas early as we do fill up really quick.” While the pub is still taking bookings for Christmas at the time of writing this in November, it’s hard not to love the pure bonkers-brilliance of starting a Christmas tree tradition in July. Only in Bristol, right?

Next
2019: the year that was
Start typing to see results or hit ESC to close
bristol gender film tv history
See all results