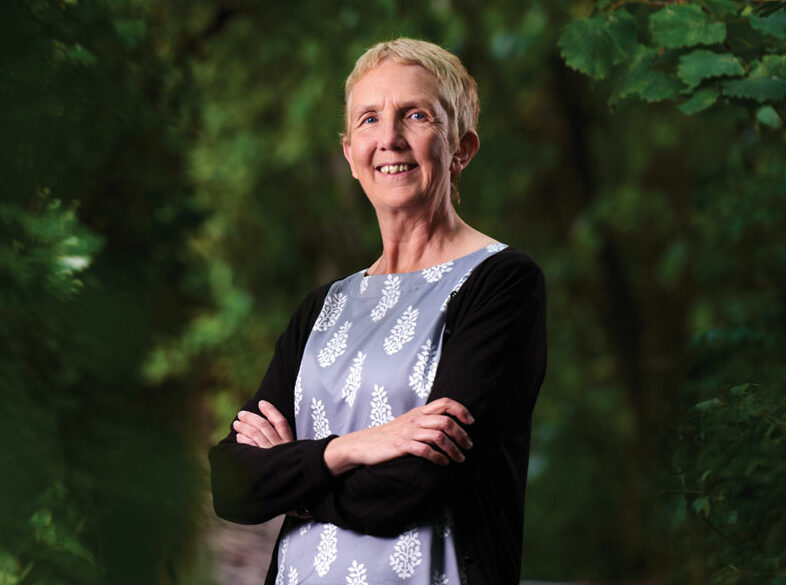 Creator of the Vera and Shetland series Ann Cleeves chats to Daisy Game about books and bird watching before making an appearance at CrimeFest later this month.

There’s something reassuring about crime, says best selling novelist Ann Cleeves. That is – when it stays tucked away between the covers of a book.

Crime novels might be fit to bust with gruesome goings-on, but there tends to be “a sense of order restored and justice done” at the end of one, Cleeves observes. With a total of 35 novels under her belt, Cleeves is one of the UK’s most prolific – and most popular – crime fiction writers. It’s not a bad market to be in: in 2018, crime became the biggest-selling book genre in the UK. When I ask Cleeves why she thinks there is such an appetite for fictional murder and mayhem, she suggests that the genre offers readers something predictable – and strangely comforting – in an otherwise rocky climate. From Covid scares to fake news stories, we are living “in a time of great uncertainty”, says Cleeves. It’s no wonder, then, that people find the promise of a neatly solved crime appealing; as Cleeves puts it, “the coming together at the end people find quite reassuring”.

That said – order is never restored for long, and where one blood-splashed door closes, another very often opens. In February of this year, Cleeves brought readers The Heron’s Cry: the second instalment in her Two Rivers series. The first Two Rivers book (2020’s The Long Call) follows detective Matthew Venn as he investigates a murder – and delves into his less-than-rosy past in the process. In The Heron’s Cry, Matthew is back to bust another crime, this time involving two dead bodies, and a large (very sharp, as it happens) shard of glass; you can fill in some of the bloody-blanks.

Cleeves has enjoyed spending time with Matthew and the Two Rivers gang again: The Long Call, she explains, was really just an introduction to the series and to its characters.“Going back gave me the chance to develop them a bit – get to know them better”, she says. It’s not just the heroes of her novels who Cleeves likes to get cosy with. “Even the people that aren’t superficially particularly pleasant, you have to like them – or just understand them; because you’re seeing the world through their eyes for a bit”, the novelist says. “I become Matthew for a little while I’m writing him. It’s a bit like acting, I think.”

Speaking of acting – I’m curious to know what it’s like for Cleeves to see her characters take to the screen. Three of the novelist’s series – Shetland, Vera, and most recently Two Rivers – have been adapted into wildly successful television programs. Cleeves, however, is more than happy to remain on the sofa-side of the TV screen.

Writing Two Rivers has not only given Cleeves the chance to revisit fictional friends, but has also allowed her to reconnect with childhood ones. The series is set in North Devon, where Cleeves grew up, and whilst writing Matthew’s various adventures the writer has bounced back and forth between Northumberland, where she currently lives, and the South West county. On the day we speak, Cleeves tells me, she has just come back from a grammar school reunion.

Cleeves’ use of setting is often the subject of critical praise. She is, states The Guardian in no uncertain terms,“the best living evoker of landscape”. “Place is important”, Cleeves says: “it’s not just a pretty backdrop for the action. We are the people that we are because of where we grew up, or where we spend time now.”

There is one place in particular that Cleeves has to thank for who she is today. The writer’s late husband worked in conservation, and the pair spent a spell of time living on a tidal island off the Wirral Peninsula. Great if you’re into birdwatching – not so great if, like Cleeves, ornithology isn’t really your thing. It was on the island that Cleeves, in an attempt to while away idle hours, started her first novel; the rest is (a very successful) history.

Cleeves didn’t always envisage herself as a crime writer; but just as so many find the genre reassuring to read, she finds it reassuring to write. Plot, I’m told, doesn’t come completely naturally to Cleeves – “I’m alright at creating character, but I’m not very good at plotting”, the novelist demures – so she finds the natural framework offered by a crime narrative helpful: “it’s not formulaic, because obviously it’s very different for each one, but you do have that structure of a murderer, and some suspects, and some form of resolution at the end. I find that very liberating – that within that I can subvert the rules a bit, or I can play with them if I’ve got that framework to work within.”

Books have had a liberating effect on Cleeves for as long as she can remember: “reading for me has always been a brilliant escape”, she tells me. In 2021 – keen for others to share in the comfort she has found in reading – Cleeves set up her Reading for Wellbeing Project. The initiative aims to support local people living in some of the most disadvantaged areas in the North East – a region with high social and health inequality – to improve their mental wellbeing via reading; Community Reading Workers help individuals in their appointed areas get access to books and places in which to read them.

Later this month, Cleeves is set to attend CrimeFest – one of Europe’s biggest crime fiction conventions – where she will reap the social rewards of reading and writing. “It’ll be grand to go and catch up with some old friends – crime writers are a really sociable bunch. We get on very well”, Cleeves tells me. There’ll be plenty of friends for Cleeves catch up with; over 150 authors, including Andrew Child, Martin Edwards and Robert Goddard, will attend the three day convention, which takes place at the Mercure Bristol Grand Hotel from 12-15 May.

Cleeves will speak on two panels whilst at the convention. To kick things off, she will be interviewed by fellow writer and crime fiction enthusiast Barry Forshaw, before she takes part in CrimeFest’s ‘from page to screen’ panel alongside Icelandic writer, Yrsa Sigurðardóttir and Sarah Pinborough: author of the Netflix hit, Behind Her Eyes.

I can’t help but think that there’s someting very Agatha Christie about the whole CrimeFest set up: with a group of crime writers all stuck in a grand hotel for the weekend, who knows what stories there will be to tell come Monday morning. It all sounds like criminally good fun.

CrimeFest is at the Mercure Bristol Grand Hotel from 12 – 15 May. For the full list of authors and to book, visit: crimefest.com.
The Heron’s Cry by Ann Cleeves is available to buy in all good bookstores. On a side note: this year’s festival is sponsored by Specsavers, whose co-founder Dame Mary Perkins was born in Bristol and attended Fairfield Grammar School.

Next
Restored to glory: a look inside the new RWA
Start typing to see results or hit ESC to close
bristol gender film tv history
See all results