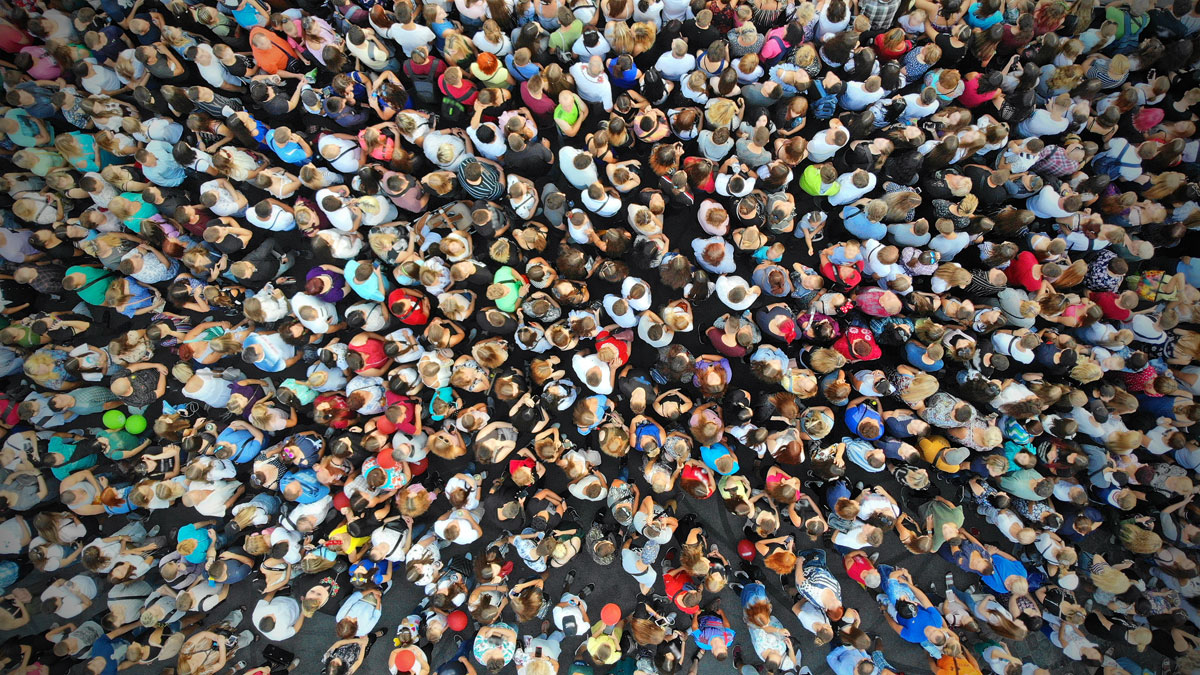 Collecting together in a crowd is a key part of being human, says Emma Clegg. While we can share and communicate in many ways through technology in isolation, for her it’s really not the same.

“Man is by nature a social animal,” said Aristotle, who argued that people are not designed to be self-sufficient, but to depend upon one another. He believed that humans are more socially interdependent than bees – and the role of language in human society proved that humans are interconnected parts of an information-sharing network.

Our information sharing now has far wider parameters than those available to the Ancient Greeks. We can communicate, associate, connect and collaborate through technology – through the internet, through radio and TV and all the various modes of communication that the last two centuries have provided. Because of this, many of us can operate fairly self-sufficiently from home, as we isolate for our own safety and to protect our medical system and limit the damage of the pandemic. For those who can’t work from home, there is a certain amount of karma in stasis; escaping the daily commute, there can be a feeling of extended holiday as we organise cupboards, cook our meals, tend our gardens, try and organise our children and take our dogs for walks.

Of course this is an enforced isolation. It’s not a choice, but a necessity. We can’t go out unless we have a reason; we can’t work unless we can do so at home or are a key worker; we can’t wander down the street without a specific reason; we can’t physically gather together to discuss, share experiences, disagree, complain, bemoan our trials, celebrate our milestones and laugh at ourselves and at the world. We can’t touch each other physically, we can’t tell each other stories and feel the storyteller’s presence, we can’t listen to live music, we can’t speak and be heard by those outside our domestic circle. Thank you for the multifarious technology that lets us get pretty close, but it’s just not the same as the physicality of sharing in a group. We need this, you see; it’s part of who we are.

There is power in a group. Dramatic crowds throughout our history have typically been assembled by religion, sorrow, war, protest and celebration, as well as by the magnetism of music and sport. There is a psychology in crowd behaviour, with four defined types of crowd. The casual or spectator crowd collect spontaneously to view an incident of note, perhaps on the cobbles of King Street to watch, through flung-open front windows, the jazz cats playing the Old Duke in summer; and the action crowd have a common purpose, perhaps a demonstration for action on climate change or a spontaneous outburst of joy or hatred. Then there is the conventional crowd, a collection of people who gather for a specific reason – perhaps attending a play, a concert, or a lecture at one of Bristol’s cultural venues; and finally there is the expressive crowd who collect together to express their feelings of joy or sorrow, to celebrate a victory from Bristol Bears maybe, or a crowd who collect to mourn someone’s loss.

Collecting together is part of who we are. Together we express our beliefs, our values, our culture, our passions, our sense of ourselves. It is the same for Bristol. It is our festival organisers, our galleries and museums, our cultural institutions, our cinemas, our bookshops and our sporting organisations who coordinate and spur these group-sharing opportunities. We have events of great note in our calendar in the Bristol region that have recently been cancelled and postponed as we deal with the current crisis, and most of them are dealing with the effects of lockdown and a loss of income.

So we’d like to celebrate the role of all those organisations who make things happen in our city and bring people together – and look forward to the time when it can happen again. We thank St Pauls Carnival, Love Saves The Day, Bristol International Jazz and Blues Festival, Pride, Harbour Festival, Bristol Sounds, Dot to Dot and Downs Bristol with their outstanding musicians, acts, and speakers, bringing joy and broadening minds. We thank all our galleries – Arnolfini, Rainmaker, Spike Island, RWA and so many more – who provide a platform for big visual ideas and statements and through whose doors we love to throng, welcoming the work of much-loved artists as well as the artistic visions of less celebrated names. We thank our historic venues – from SS Great Britain, Trinity Centre and St George’s – who define our city and make it meaningful and resonant. We thank the diverse and inclusive annual programme at the Colston Hall and the theatrical experiences from extravaganzas to experimental pieces at Bristol Old Vic and Tobacco Factory Theatres. We wholeheartedly appreciate all the funny to be found on the doorstep courtesy of Bristol Comedy Garden and Slapstick Festival, and the eclectic programme of films at Watershed, Encounters and the Cube. We are grateful to the other festivals that punctuate the year with flair, including this year’s inaugural Bristol Light Festival, Eat Drink Bristol Fashion and Food Connections. We thank our sports venues who keep us moving and keep us following the big players, and the annual fiesta that fills the city’s skies with dreamy hot air balloons in myriad colours and shapes. We thank all those who keep us thoughtful and informed, from Festival of Ideas and their lectures and exhibitions to our bookshops who invite esteemed authors to visit our city. We look forward to being with you all again.

We will meet again, as the Queen reassured us, and gatherings involving positive shared experiences – both big and small – will return. They will lift our hearts, expand our minds, and make us feel strong, alive, and as one, as they always have done.

• Maracana Stadium in Brazil had a record attendance of 199,854 for the Brazil vs Uruguay match in the World Cup final in June 1950.

• Three million people gathered in London in June 1953 to celebrate the Coronation of Queen Elizabeth II.

• In 1982, one million people demonstrated in New York City’s Central Park against nuclear weapons and for an end to the Cold War arms race.

• In 1997, Jean Michel Jarre gave a concert at the Moscow State University in celebration of the city’s 850th anniversary, with 3.5 million attendees.

• In 2003, six million people took to the streets around the world to protest about the Iraq War.

• Around two to four million people attended the funeral of Pope John Paul II in Rome, Italy in April 2005.

• The Kumbh Mela, the Hindu pilgrimage and festival held every 12 years, in 2010, had between 60 and 80 million participants.

• An estimated 1.5 million people were at 2013’s San Francisco Pride, in the wake of the Supreme Court decisions on DOMA and Proposition 8.

• The Manchester United vs Real Madrid International Champions Cup in 2014 in Miami saw over 109,000 attendees.

• The number of spectators at recent Tour de France cycle races is estimated to be 12 to 15 million.

The capacity at Ashton Gate is 27,000. Wouldn’t it be great to fill it and be part of a Bristol City crowd right now.