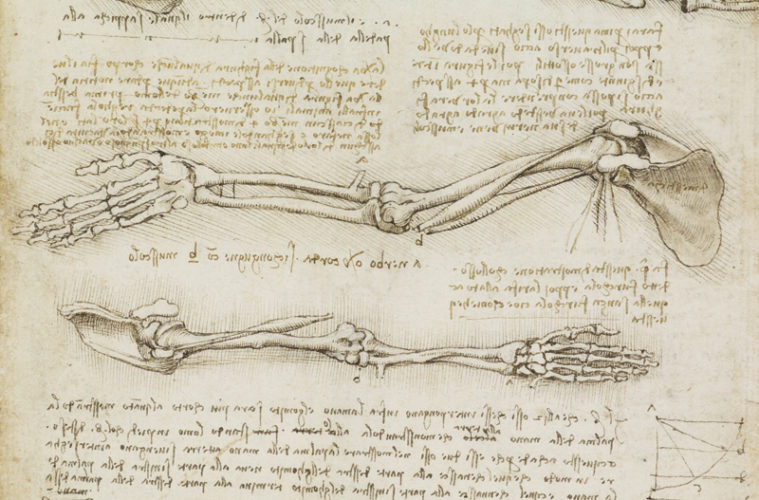 This month, to mark the 500th anniversary of the death of a genius, 144 of this Renaissance master’s greatest drawings in the Royal Collection are being displayed in 12 simultaneous exhibitions across the UK, including Bristol Museum & Art Gallery

Nobody likes a triple threat, much less a nonuple one, so we can only imagine the extent to which Leonardo da Vinci must have been the envy of his mates, with toes dipped deep in the pools of painting, sculpture, architecture, music, anatomy, engineering, cartography, geology and botany. Now, a new nationwide event, ‘Leonardo da Vinci: A Life in Drawing’ is giving the widest-ever UK audience the opportunity to figure out the multi-talented man through some of his extraordinary art work. Twelve drawings, chosen to reflect the full range of Leonardo’s interests will be shown in Belfast, Birmingham, Bristol, Cardiff, Derby, Glasgow, Leeds, Liverpool, Manchester, Sheffield, Southampton and Sunderland.

Then, this May, the drawings will be brought together for a major exhibition – the largest of Leonardo’s work in over 65 years – at The Queen’s Gallery, Buckingham Palace. “We’re thrilled to be one of the host venues,” said Laura Pye, head of culture at Bristol City Council. “Partnering with Royal Collection Trust means we can bring globally significant art to Bristol and our visitors get the chance to experience some of the most technically accomplished drawings in the entire history of art.”

Revered in his day as a painter, Leonardo completed only around 20 paintings; he was respected as a sculptor and architect but no sculpture or buildings by him survive; he was a military and civil engineer who plotted with Machiavelli to divert the river Arno but the scheme was never executed. Similarly, he was an anatomist and dissected 30 human corpses but his ground-breaking anatomical work was never published; he planned treatises on painting, water, mechanics, the growth of plants and many other subjects, but none was ever finished. As so much of his life’s work was unrealised or destroyed, Leonardo’s greatest achievements are to be found on sheets of paper.

The drawings in the Royal Collection have been together as a group since the artist’s death, and provide an unparalleled insight into Leonardo’s investigations and the workings of his mind. He firmly believed that visual evidence was more persuasive than academic argument; that an image conveyed knowledge more accurately and concisely than any words. Few of his surviving drawings were intended for others to see: drawing served as his laboratory, allowing him to work out his ideas on paper and search for the universal laws that he believed underpinned all of creation.

The exhibitions include examples of all the drawing materials he employed including pen and ink, red and black chalks, watercolour and metalpoint. They also present new information about Leonardo’s working practices and creative process, gathered through scientific research using a range of non-invasive techniques, including ultraviolet imaging, infrared reflectography and x-ray fluorescence. The findings will be brought together in a groundbreaking new book, Leonardo da Vinci: A Closer Look, published by Royal Collection Trust in this month.

…He was interested in making sense of the world around him, be it anatomy, engineering or the movements of cats..

“The drawings of Leonardo da Vinci are a national treasure, both incredibly beautiful and the main source of our knowledge of the artist,” said Martin Clayton, head of prints and drawings at Royal Collection Trust. “We hope that as many people as possible across the UK will take this unique opportunity to see these extraordinary works, which allow us to enter one of the greatest minds in history and to understand the man and his achievements.”

Ahead of the exhibition opening to the public on 1 February, Dr Jenny Gaschke, curator of fine art at Bristol Museum & Art Gallery, shared her thoughts on the show…

TBM: What are the most fascinating things about these 12 drawings?

Dr Gaschke: These drawings allow us to understand just what an incredible artist Leonardo da Vinci was and how relevant he still is today. They show us how brilliant he was at drawing using lots of different techniques, but what is more, they unlock his mind, which he could turn to anything. He was interested in making sense of the world around him, be it anatomy, engineering or the movements of cats. And at the same time he imagined dragons and deluges and drew sublime landscapes. Drawing was Leonardo’s way of developing ideas beyond the boundaries of subjects we usually associate with art. The young creatives who we invited to curate a display in response to the exhibition called it ‘thinking on paper’. Just by hanging the drawings in chronological order we will all be able to follow A Life in Drawing.

Not everyone knows about the other strings Leonardo had to his bow – what do you think are the most interesting of his ideas?

Among the drawings we have on loan from the collection I personally find his anatomical drawings particularly interesting. The acute understanding he gained from his studies of the body – his last known anatomical campaign, an analysis of the heart, was perhaps the most brilliant of his many scientific investigations. His dissections were of an ox’s heart, focussing on the action of the valves in a series of densely annotated sheets. In one of the drawings we are showing, Leonardo cut into the right ventricle of the heart to reveal the papillary muscles, with their tendons (the ‘heart strings’) reaching up to the tricuspid valve. At centre right are two views, from either side, of the valve when closed. The diagram at the top of the sheet shows the heart cut through and opened out such that the three cusps of the valve are seen lying flat against the heart wall. It would be many years before any other anatomist approached Leonardo’s understanding of the heart’s operation. Apparently he made discoveries about heart function that were not completely proved until the invention of MRI scanning.

His mirror writing appears to simply be a childhood quirk (Leonardo was left-handed) which was never corrected – no intention to hide anything, no conspiracy theory – quite the contrary: Leonardo wanted to publish his scientific observations. He also wasn’t very good at maths – a lot of his inventions would not have worked in practice. And he liked climbing mountains, long before that was a popular thing to do.

We’re intrigued as to how an exhibition like this travels around; guessing it’s not a case of whacking it all in the back of a van…

Yes, to prevent damage occurring to the drawings they need to be kept in regulated temperature and humidity, so they travel in specially equipped vehicles inside crates. They are also very sensitive to light – there is a limit to how long they can be displayed for, and how many hours each week we can have the gallery open.

Will you be hosting any events around the exhibition to draw in different audiences that might not normally visit?

Yes! We will be hosting a series of late openings so you can enjoy the exhibition after-hours and there will be several talks, one of which will be given by Martin Clayton, who is head of prints and drawings at the Royal Collection and a leading expert on Leonardo’s work. There will also be a very romantic Renaissance-themed evening on Valentine’s Day with prosecco and music.

• See the exhibition until 6 May; bristolmuseums.org.uk