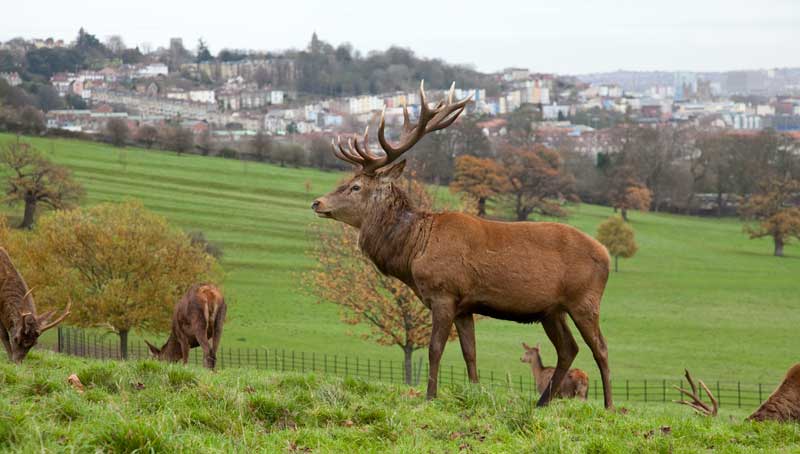 Deer-watching: Lord of the Manor

This month, Pete Dommett goes deer-watching on his doorstep

Under a flawless, ice-blue sky, a large herd of deer bathes in a welcome wash of winter sun. My youngest boy and I try to count the stags lying among the many conker-coloured hinds. We spot at least nine, their spiky antlers poking up above the still-green grass and giving them away. These are red deer – Britain’s largest land animals – but we haven’t travelled to the Scottish Highlands or the wilds of Exmoor to see them. In fact, we’re just 10 minutes from Bristol’s city centre.

Ashton Court became a deer park over 600 years ago, making it one of the first in the country. Deer were kept, and hunted, here for centuries, but the estate fell into disrepair after the Second World War and the animals escaped through the broken boundary walls. Then, in 1959, the city council bought up the land and deer were reintroduced a decade later. Rangers Mark Cox and Julian Smart have been looking after them for much of the time since then. “Mark’s been the ranger for 32 years,” says Julian. “But I’m the newbie – I’ve only been here for 27!”

Their experience is matched by their obvious enthusiasm, as they tell us, with palpable pride, about their charges. “We’ve got a herd of about a hundred reds in one area, near the mansion house,” Mark clarifies. “And about the same number of fallow deer on the other side of the estate.”

So Tom and I set off to find the fallow herd. Their enclosure is more wooded than the reds’ and consequently looks more natural, but fallow deer are not native to the UK – they were introduced by the Normans in the 11th century. They’re pretty animals – some have spotted coats, Bambi-style, while others are plain and paler.

We watch a big buck, almost white in colour with wide, palmate antlers, browsing the bushes beneath a magnificent old oak. Deer grazing is used to control scrub encroachment on the estate, enabling wildflower meadows – and the rare species, like green-winged orchids, that are found there – to flourish.

The deer lead a privileged life at Ashton Court. They’re no longer hunted, of course, and, in the winter, their diet is supplemented with hay and sugar-beet. As a result, they tend to be larger than their country cousins and males have bigger antlers.

In red deer, antler size determines a stag’s ‘rank’. “A red with 12 points on his antlers is called a royal stag, one with 14 is an imperial stag and one with 16 points is a monarch,” explains Mark. “The biggest stag we have at the moment has got 21 points, so I’m not sure what that makes him!”

We return to the red deer field to search for this mythical-sounding beast. Sticking to the signposted paths is the safest way to observe the deer on the estate. They may not be wild, but they’re not tame either. A fully grown stag can weigh up to 190kg or nearly 30 stone – an intimidating sight at close quarters.

Eventually we find him, feeding peacefully amidst a harem of hinds. He stops for a moment and stares directly at us, chewing nonchalantly like a gunslinger in a Western saloon bar. This city stag might not be the monarch of the glen, but, round here, he’s certainly the lord of the manor.

For more tips on watching deer at Ashton Court, go to: ashtoncourt.bower-ashton.co.uk

Featured image: A red deer stag at Ashton Court. As well as red and fallow deer, wild roe deer can also be seen on the estate. Image credited to Bristol City Council