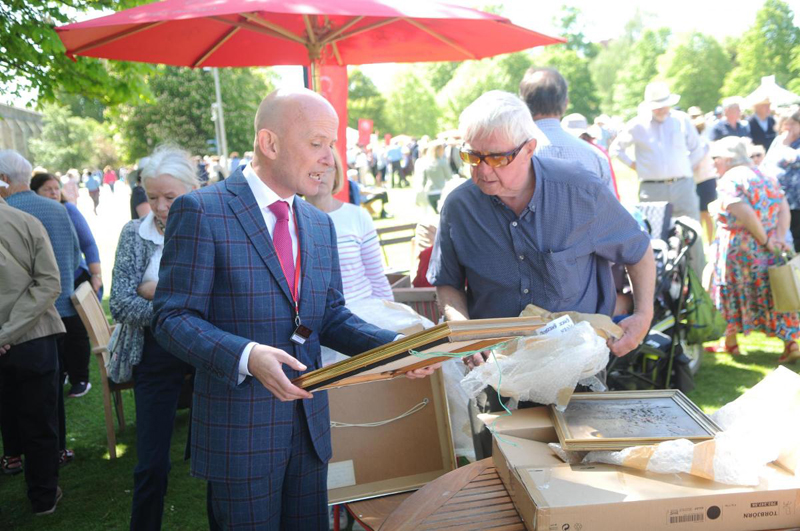 Design for life: an interview with expert curator Chris Yeo

Ahead of a new monthly column for The Bristol Magazine, we get to know expert curator Chris Yeo – specialist in 20th-century design and craft – a little better

Chris Yeo has just joined the team at one of the longest established fine art auction houses in the South West, cataloguing Clevedon Salerooms’ antique, interiors, collectables and jewellery auctions and quarterly specialists sales, and dealing with valuation enquiries. Known to many from his appearances on BBC’s Antiques Roadshow, Chris also works as curator of Bristol’s Ken Stradling Collection.

TBM: You’re wearing at least three hats now – how will you divide your time between the Salerooms, Roadshow and Ken Stradling?

Chris: Antiques Roadshow usually takes up only a few days of the year; for that reason all the specialists on the programme have ‘day jobs’, working with art and antiques. I’ve handed over a lot of my day-to-day work as curator at the Ken Stradling Collection and have instead been concentrating on helping develop a programme of online talks and other activities to enable us to carry on during lockdown and beyond. I’ll also be curating exhibitions in our new window gallery, which people can view from the street outside. It’s a manageable load which I’ll be able to fit in alongside my work at Clevedon but I don’t envisage much ‘down time’. It’s a good job I enjoy being busy!

What have been your most storied items in recent times?

There have been so many highlights on Antiques Roadshow but I think the most memorable item was the script for the first ever episode of Dr Who which I valued. The owner had been given it by his grandfather and although he knew it had some value, he had no idea exactly how valuable. He almost fainted when I told him it would likely sell for between £5,000 and £7,000. He did go on to sell it – for £7,500 – and the story made the national news.

For those who aren’t familiar, what is the Ken Stradling Collection?

It’s a remarkable collection – approximately 2000 items – of 20th and 21st-century decorative art which has been put together over the last 70 years. Ken Stradling, my boss, was for many years the managing director of the Bristol Guild of Applied Art – which he joined in 1948 – and was one of the first people to popularise modern design in Britain. We’re different from other museums, in fact we don’t even call ourselves a museum. We encourage people to look at and handle things, pick up a vase or even sit on a chair, so there are no ropes and no ‘please do not touch’ signs. We’re keen that learning to look at something, to appreciate an object, is as important as making that object. The collection is based in a four-storey building in central Bristol which is open to the public by appointment.

Tell us about about some of the pieces in the collection

The jewel in our crown is a unique group of furniture designed in 1935 by Marcel Breuer for the Bristol home of furniture manufacturer Crofton Gane. Gane played a pivotal role in introducing the Modern Movement to 1930s Britain. He and Crofton became friends shortly before Breuer arrived in England after the closure of the Bauhaus. The 10 pieces of furniture we have are pivotal in the development of Marcel Breuer’s style and, for that reason, are of international significance. Ken was also one of the first people to sell Scandinavian design in the UK and the collection has some fantastic mid-century pieces from Denmark, Sweden and Finland.

How did you get the job?

Before I joined the Collection I’d worked for an auctioneers, which is where I got to know Ken as he was one of our regular buyers. Even then people knew about Ken’s collection but, as it wasn’t then open to the public, very few people had actually seen it and it had acquired an almost mythical status. Then, a few years ago, Ken started to open the collection to the public and I was one of the first visitors. On my first visit, I asked if the collection had been catalogued and when I found out it hadn’t I offered my services – sometimes it helps to be a bit cheeky. That eventually led to me being offered the job as curator.

I’ve always been fascinated by the objects around me. Even before I could speak I remember being spellbound by furniture and household bits and pieces. My grandparents would take me to antiques fairs and, unlike most small children, I loved it. That led to a fascination with country houses and I would always be badgering my poor parents to take me to the nearest National Trust house. At 10 I started writing to the curator of Longleat House, who was very helpful and really supported my interest. Aged 14, I started buying and selling antiques from a weekend market stall in the local village hall. I studied history at university and then, in my 20s, had a spell working outside the field, but the lure of antiques kept calling, so I went back to university and did a master’s degree in fine art valuation after which I worked in an auction house, which led to the Ken Stradling Collection and Lorfords Antiques in Tetbury.

Do you have a favourite local spot?

I grew up in Somerset and have lived in Bristol for 20 years, so that’s a tough question. For Bristol, it would be Somerset Street in Kingsdown – an incredibly atmospheric street of Georgian houses with spectacular views over the city centre. In Somerset it would have to be the lighthouse on the beach at Burnham-on-Sea, where I lived as a child. If ever I need space to think something out, I always head there knowing that my mountains will shrink to molehills the moment I arrive.

Reading! I’ve collected books all my life and own hundreds but, being very easily distracted, I rarely got round to reading them properly. So I decided to use lockdown as an opportunity to give my books some attention and improve my concentration skills at the same time.

Main image: At a roadshow at Salisbury Cathedral in 2019

Next
Not your muse: an interview with Celeste
Start typing to see results or hit ESC to close
bristol gender film tv history
See all results