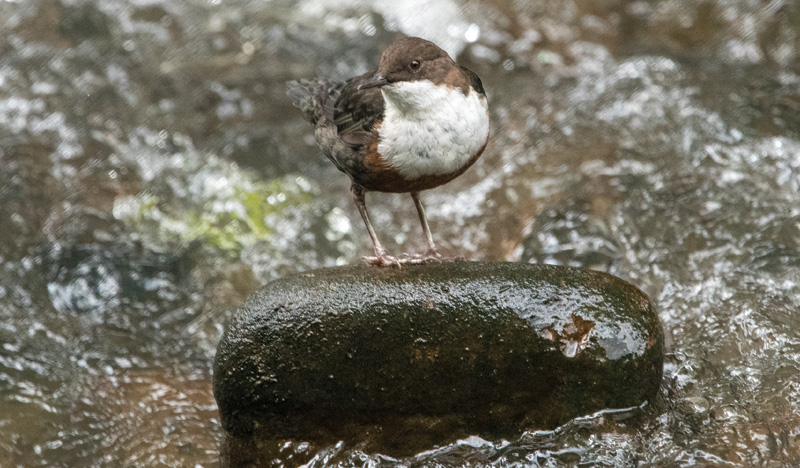 This month, our wildlife columnist, Pete Dommett, goes in search of a swimming songbird.

Dip (verb): to fail to spot a bird that you really wanted to see. It’s a birdwatching word. And an apt one, because recently I very nearly dipped while searching for a species that I’ve been wanting to see in Bristol for a while – the dipper.

If this is a bird that’s unfamiliar, then let me introduce you. In Tweet of the Day (the book version of the popular Radio 4 series), the dipper is described as looking like a “wren on steroids”. It’s a good image: a dumpy bird with a stubby tail, but pumped up to twice the size. At a distance, it appears to be boldly black and white, but, in the same way as if you stared into a pint of stout, a closer look at one of them reveals a more subtle colour scheme of cream, chocolate- brown and chestnut.

Find the dipper in your bird book and it will tell you that it’s a bird of mountain brooks and moorland streams. In the West Country, this means Exmoor and Dartmoor and it’s true that this species thrives alongside water in remote countryside. But, provided there’s a stretch of suitable river on which to feed and breed, dippers can become urban birds.

Records of dippers in Bristol’s Frome Valley go back over 100 years. These birds like fast-flowing rivers (the River Frome takes its name from the Anglo-Saxon word, Frum, meaning rapid): the well- oxygenated water supplying them with plenty of aquatic prey. To find it, the dipper stands on a stone mid-stream, jigging up and down on bended knees like a nervous diver, before plunging underwater. Using its short, rounded wings like flippers, the bird propels itself to the riverbed where, by gripping tightly onto pebbles with its feet (having solid, rather than hollow, bones also helps keep it submerged), it walks along the bottom in search of insect larvae, freshwater shrimps and snails. This method of foraging is unique among songbirds and was once widely disbelieved by naturalists.

When it comes to breeding, dippers get going early: by the beginning of this month, they may well have eggs in the nest. This football-sized structure – made of moss, bracken and dry leaves – is squeezed into the stonework of an old bridge or stuffed beneath the overhang of a riverbank or rock face, and often, it would seem, perilously close to the water. No need to worry though – just a few days after fledging, the young birds (can we call them dipperlings?) are able to swim.

I followed the Frome Valley Walkway from Eastville to Frenchay, checking all the likely-looking dipper hotspots. But, after weeks of relentless rain, the river was high and the usual stretches of shallow rapids were completely submerged. So I switched to exploring the smaller streams that feed into the Frome and, just as I was about to call it a day, got lucky – a dipper, perched on a rock in profile, was doing its giant-wren impression. I wanted to see it swim or hear it sing (a sweet, rippling warble, apparently) as I’ve witnessed neither behaviour before, but, as soon as I settled in to watch, the bird took flight and barrelled upstream in a blur of whirring, brown wings. Then, moments after I cursed my fleeting fortune, a second bird followed the first, flying low over the water and calling sharply. So, not one, but a pair of Bristol dippers. Now that’s something to get completely dippy about.

Find out more about the Frome Valley Walkway at fromewalkway.org.uk