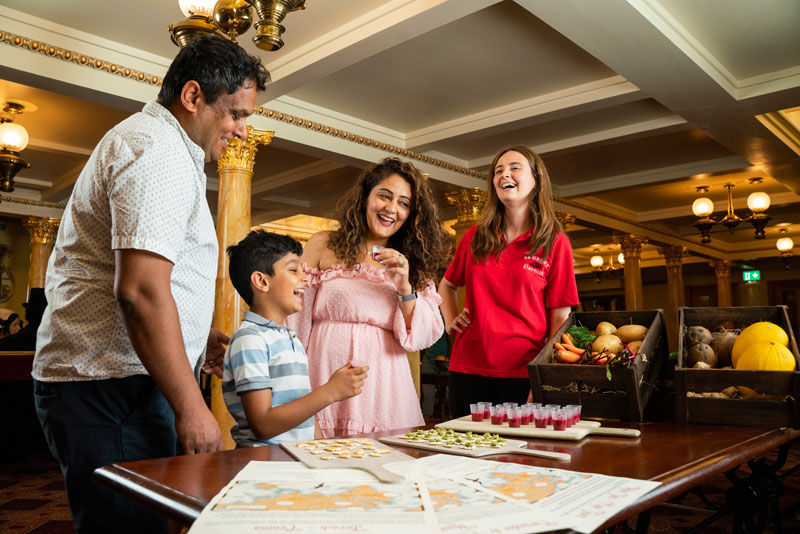 ‘Dishes of Discovery’ at The SS Great Britain

Brunel’s SS Great Britain is inviting visitors to ‘Taste the World’ this summer as it offers visitors the chance to sample delicacies inspired by Victorian voyages to destinations visited by the ship in the 19th century. We take a look at what’s on the menu…

During her working life, the SS Great Britain journeyed to six continents, 24 countries and around the world an incredible 32 times. Her passengers and crew experienced many cultural sights, sounds, smells and, most notably, tastes.

From 23 July to 4 September, visitors who step aboard the SS Great Britain will have the opportunity to tuck into historic recipes, discovering how the world’s first great ocean liner connected people and places around the world.

The dishes have been created by Bristol-based social enterprise, Travelling Kitchen, whose team worked with the ship’s archivists to explore recipes from around the globe. The dishes created include a zingy melon and ginger jam from Cape Town, traditional borsch from Crimea and a tropical green coriander and coconut chutney from Mumbai – and are typical of those that passengers would have encountered as they disembarked in the faraway destinations.

The SS Great Britain Trust’s interpretation team studied diaries and documents to create these authentic recipes. As Joanna Mathers, Head of Collections at the Trust, explains: “We have made some fascinating discoveries as part of this project. One of the dishes – the green coriander and coconut chutney – was inspired by Samuel Archer, the ship’s surgeon on a voyage to Mumbai in 1857. We have access to his diary, which describes the food he experienced and this process gives visitors to the ship a chance to step back in time to the days before mass travel. These flavours would’ve been brand new and exotic, and for many, their first time encountering the likes of coconut, ginger and melon.”

The aim of the Dishes of Discovery activity is to highlight the ship’s diverse reach across the oceans and, the ports she visited, as well as giving visitors the chance to experience that culinary excitement for themselves. The recipes on offer are:

Melon & Ginger Jam
This is featured in a recipe book by Hildagonda J. Duckitt, which contains many ‘old Cape, Indian and Malay dishes and preserves’. Melon and ginger jam is a very simple recipe only containing melon, sugar and bruised ginger.

Green Coriander & Coconut Chutney
This is a version of a traditional chutney that visitors to Mumbai during the 19th century may have tasted. In the UK, we often think of chutneys involving vegetables or fruits with spices preserved in sugar and vinegar, but traditionally Indian chutneys would be made fresh on the day that they were consumed. This recipe comes from Colonel Arthur Robert Kenney-Herbert’s book Culinary Jottings for Madras.

Borsch/Borshch
Beetroot borsch was probably first made in what is now Ukraine, in the 17th or early 18th century with potatoes and sometimes tomatoes being added in the 19th century. This recipe may be served chilled as borsch is suitable for the summer months.

Book your tickets at: ssgreatbritain.org

Colonel Arthur Robert Kenney-Herbert, who regularly wrote articles about Indian cookery for The Madras Mail, Madras Atheneum and The Daily News using the pen-name Wyvern, first published his book Culinary Jottings for Madras in 1878. Following over 30 years working in India, he shared recipes for a number of fresh chutneys including tomato, cucumber, coconut, mint and tamarind.

Here, we look at his recipe for green coriander and coconut chutney, which visitors to the SS Great Britain will be able to try this summer.

Note: This quantity makes a 150g tasting portion. It is best served on the day it is made but it can keep for up to three days in the fridge. We suggest serving about ½ a teaspoon on a mini papadum. Allergens: None, although some people may experience a reaction to coconut.